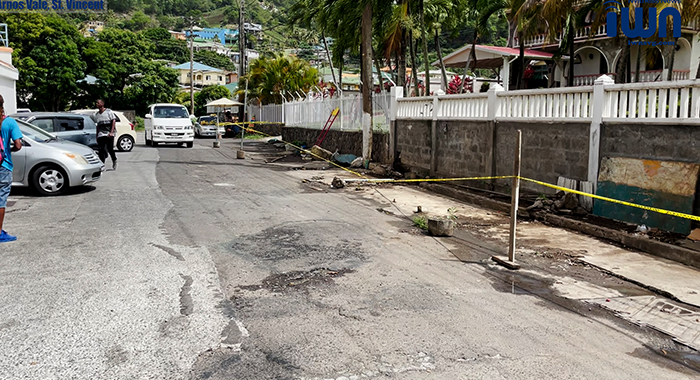 The area in Arnos Vale on Tuesday, June 7, 2022, one day after the stalls were destroyed.

Lawyer Kay Bacchus-Baptiste says the destruction of the farmers’ market operated by vendors on the road outside Massy Supermarket in Arnos Vale on Monday was illegal.

She told a press conference, on Wednesday, that the vendors’ stalls and wares were destroyed even as they were awaiting the hearing of their 2020 appeal of planning officials’ notice for them to vacate the area.

On July 9, 2020, the Physical Planning Department wrote to the vendors giving them seven days to remove their structure.

Bacchus-Baptiste said about five of the vendors went to her formally and she appealed those letters.

“The appeal was filed and served on the Physical Planning Board on the 13th of July 2020,” Bacchus-Baptiste told the media in Kingstown.

Bacchus-Baptiste, who was the opposition New Democratic Party’s candidate for West St. George, where Arnos Vale is located, in the 2020 general elections, said the appeal had seven grounds, the first of which was that no enforcement notice had been served on the five persons, as the Physical Planning Board alleged.

The appeal said that even if a notice was served on Feb. 23, 2018, as the Physical Planning Board “wrongfully stated”, it was illegal and void, and of no effect, having not been served within five years as mandated by law.

She said the notice was not served in accordance with any specified provision of the relevant law and the letter must therefore be withdrawn.

The lawyer argued that the July 9, 2020 letter was “discriminatory and motivated by political malice and spite and contravenes the Constitution of St. Vincent and the Grenadines”.

The Physical Planning Board was to be put to strict proof of service of the alleged enforcement order according to law, the lawyer reasoned, adding that the notices are in contravention of Section 8 of the Town and Country Planning Act.

“Now, this was served on them … since the 13th of July 2020. That is almost two years ago. I have had no response from the board in relation to the appeal. So, therefore, the appeals were not heard. Therefore, it is absolutely illegal for Physical Planning and the police to just go and remove these structures of persons who they say they served the notice on.”

The lawyer said that not only were the planning laws breached, but the police and planning officials “have committed acts of trespass to the goods of these people” and should be sued.

“… even if they wanted to remove the structures there, as they say, why was it necessary to do it in the wee hours of the morning, and to confiscate all the produce.

“… The law says that once you have been there for over five years — in fact, if you’re going to serve an enforcement order, you have to do it within five years.”

Bacchus-Baptiste said that the previous legislation had capped the period at four years, but the ruling Unity Labour Party administration increased it to five years.

“And yet they did absolutely nothing until recently, as I said two years ago, they tried to move them. They recognise that they could not move them based on the appeal that I lodged.

“And then again, the election was in the air. So they allowed them to stay. What happened? That is the question, what happened, why suddenly they are removing these vendors from Massey?”

She said she was told that the new management of Massy had a meeting with the vendors.

“… some St. Lucian guy, I’m told, … according to them, in the meeting, he wanted them to remove their things, or he would make some sort of arrangements for them. That is what was discussed in the meeting. And that he would get back to them. That is about three weeks ago.

“Suddenly, without warning, like a thief in the night, they came, the government, and removed all the structures…”

She said that one of the vendors, Kentish Bowens, who attended and spoke at the press conference, approached the management of Massy for a meeting, “only to be told that Massey has bills to pay and a bank loan to meet … and that they are blocking the way to customers or preventing customers from coming in there because they are selling competitive items.

“And that is the justification that they gave for not at least having a meeting with the vendors before and for coming and illegally removing their stuff. “So I ask the question, what gives the big business, Massy, more rights than the poor struggling vendors? Aren’t we still in a free society, a capitalist, free society? How could it be reasonable for the big businessman to remove the struggling vendors? Because they’re selling the items that they are selling also? It cannot be justified on that ground,” Backus-Baptiste said.