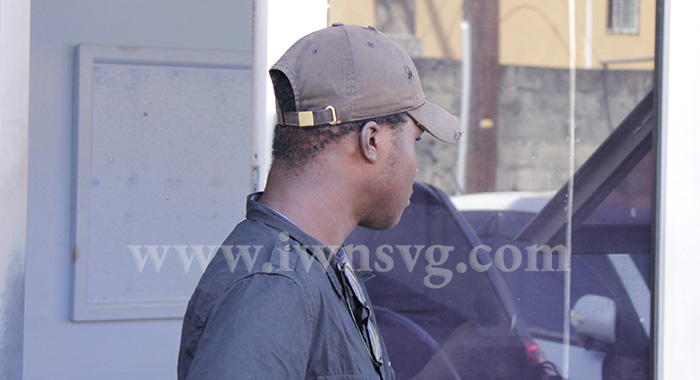 The defendant, Leswan Stewart, of Edinboro outside Kingstown Magistrate’s Court on April 22, 2022.

A 20-year-old thief gave away himself after answering a cellular phone he stole from a vendor’s bag in Kingstown.

On Monday, Leswan Stewart, of Edinboro, pleaded guilty before Chief Magistrate Rechanne Browne at the Serious Offences Court, in Kingstown, to a charge that on May 30, at Higginson Street, he stole one cellular phone, valued at CAD$500, one phone case, valued at EC$100, and one SIM card, valued at EC$30, the property of Agnes Haynes-Williams, of Green Hill.

Prosecutor Corporal 817 Stapleton, in presenting the facts, said that Haynes-Williams, 61, was  vending outside Kingstown Anglican School, on Higginson Street, when around 2 p.m., the defendant, who she knows very well, came and sat beside her and her twin sister.

Unknowing to Haynes-Williams, Stewart pushed his hand in her bag, removed  the cellular phone and later left the area.

When the woman discovered her phone was missing, she asked someone for a call,  telephoned the number and a voice that sounded like the defendant’s answered.

Haynes-Williams reported the matter to the Criminal Investigation Department.

Police found the phone during a search of Stewart’s person.

The defendant gave a written statement admitting to the offence.

Stewart told the court that he had nothing to say about his actions.

In handing down her sentence, Browne noted that Stewart pleaded guilty at the first opportunity and that the phone was recovered in good condition.

She said Stewart took advantage of a self employed woman who uses her phone for communication and breached her trust and confidence in him.

“How could you do that to someone?” the magistrate said.

She ordered restitution of the phone.

However, on May 20, the Kingstown Magistrate’s Court had sentenced Stewart to a three-month sentence, suspended for one year, after he pleaded guilty to charge that he damaged a glass pane at the Republic Bank’s building.

The chief magistrate ordered Stewart to serve that sentence and further bonded him for nine months in the sum of EC$1,500.

If he breaches the bond, he must pay EC$1,500 forthwith or go to prison for nine months.

On April 22, Stewart pleaded guilty to damaging a show window valued at EC$765, the property of the First St. Vincent Bank Ltd.

However, Senior Magistrate Rickie Burnett, on hearing the facts, vacated the guilty plea and set a trial for June 29.

One reply on “Thief nabbed after answering stolen cell phone ”