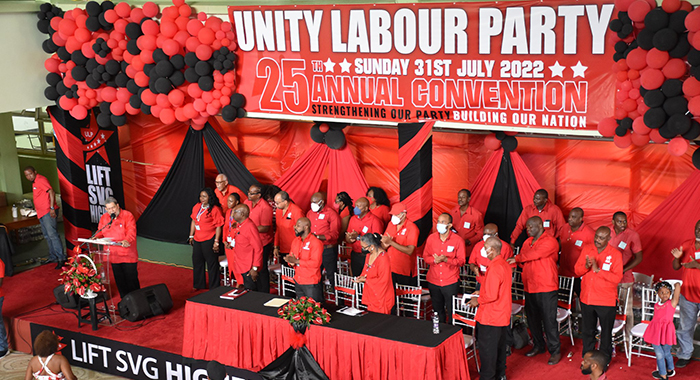 “It is quite clear that they’re in total disarray; that they are divided. If your convention you have to spend so much time cussing everybody else and emphasising the need for unity … After 22 years, the need for unity?” Friday said on his weekly radio show on NICE Radio.

“… it shows that they have a serious problem. And it is time that the people of this country move beyond that,” he said, adding that the people have “enough serious matters of our own to deal with.

“And they need a government that focuses on them. Not on the inheritance of the dynasty or whatever.”

The opposition leader said that his New Democratic Party’s interactions on radio, is an opportunity to interact with the public.

“… sometimes, it’s difficult if somebody is saying something I may not like to hear but that is their right to say it and we’ll listen and you’re humble enough to say, ‘Well, I don’t always have all the information and I can’t always know everything. I don’t know everything.’

“You have to have that humility. And you listen and you make decisions based on the input of others and so forth.”

Friday said that this is what the NDP does when it interacts with people.

“I’m not afraid to meet the people and hear them say, ‘Friday, this is what we should be looking at, … not parliament building that alyo talking about and so forth.’”

He said the people want the government to focus on footpaths and roads to their homes and river encroaching on their homes.

“‘Focus on something that really matters to me.’ That is what they’re asking you to do as a political leader.

“And that’s what I want to do and that is what I will do in government and that’s why I’m so urging the people, take this opportunity now, let us bring the change that you voted for in the last election, the first opportunity we get,” he said, noting that the NDP won the majority vote in the November 2020 general elections.

“We have to continue that process, complete the process so we can have transformation in this country.”

The opposition leader said that the NDP has always said that it is a big tent that welcomes everyone.

He said that the ULP is a “backward force in our country” and it has become  “more evident to people that what is most important to them is political power”.

The ULP has been in office since 2001 and Friday said that in the early years of the administration, when it was popular, it was easy for the party to be democratic “because you’re getting your way.

“But over time, as that support dwindles and people start seeing and talking about the failures of the administration, of the government, as they are doing now here with this present ULP government, and they see that there are alternatives that are better, that offer more promise, as they are seeing with the Democratic Party … then they’re saying it’s time for us to make a change.”

The opposition leader said that the NDP “will welcome any and everyone who is looking for change, to bring change in this country, for political change, that will then lead to economic changes, and the way in which our country governs itself, to be more inclusive, to be more respectful of the citizens who elect the persons after all, to be in an office”.

“But at this moment in our political life in this country, it’s more akin to a movement for change to bring everybody together, a movement to remove the ULP from office,” Friday said.

“And they have indicated that they are interested in holding on to power and Gonsalves is driven by that objective. And that is something that has to be opposed, when the methods used are undemocratic and when they are simply destructive for the national good.

“I am of that view. I offer myself as a better alternative, but in the future of this country, political power is not just a long marathon. It’s more like a relay. You have to run your leg and then pass on the baton.

“And that is what has been done throughout the history of our country. You don’t wait until you fall down,” Friday said.