Only disunity can defeat ULP — Gonsalves 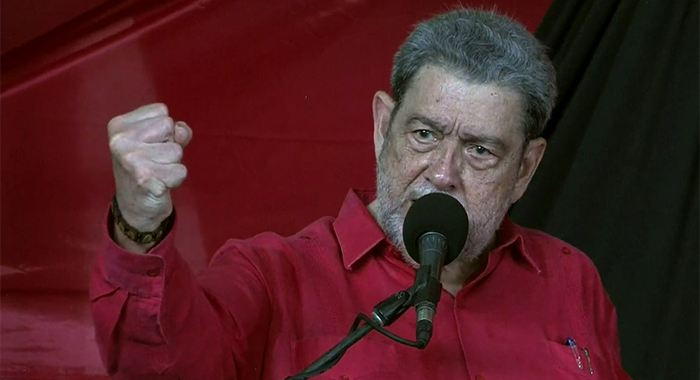 Political Leader of the Unity Labour Party, Prime Minister Ralph Gonsalves makes a fist to illustrate a point at the party’s 25th convention on Sunday, July 31, 2022.

Political leader of the ruling Unity Labour Party (ULP), Prime Minister Ralph Gonsalves has promised party supporters that he will win the next general elections, saying only disunity can cause the party to lose.

He made the point at the ULP’s 25th convention in Campden Park, on Sunday, where he arrived to chants of “Caesar! Caesar!”

Through the chants, some party supporters were apparently expressing their preference for Gonsalves’ successor at the party conference, where the issue of leadership transition was deferred.

Gonsalves used much of his speech to urged party unity and quoted what the party’s constitution says is required of members, including being bound by the policies and decisions of the party.

“You can’t be part of the party and be apart from it,” he said.

“You can’t fight it so because you’re in a struggle. If you punch, you go break your finger if you keep your finger so,” he said, loosening the fist.

“You have to have your fist like this. That’s how the Unity Labour Party has to be with its policies, its decision, it’s principles, its aims and objectives and its decision.

“And I tell you this, on these matters, the entire leadership of your party are at one on these issues. And over the next three years, the amount of work which we are doing and the rolling out what is taking place, when 2025 comes or whenever before we go to the polls, we will have such an additional record of achievement that the only way we can be defeated is if we are not united. You get my message? You hear the message of a man who in the struggle for 54 years?” said Gonsalves, who is into his 21st years as prime minister and 24th as leader of the ULP.

General elections in St. Vincent and the Grenadines are constitutionally due in February 2026 but Gonsalves said he wanted to reminded party supporters of what the by-laws of the party requires of candidates — in addition to the national Constitution and election law.

“Occasionally, we may make a mistake but we try not to make mistakes,” he said, adding that ULP candidate must be committed to the party’s work, principles and decisions.

“You’re not by yourself… You’re part of a party,” Gonsalves said, adding that that is why the ULP screens candidates.

The party’s by-laws say that candidates must be self-disciplined, he said.

“You can’t be irresponsible, you can’t be reckless, you can’t be lazy,” Gonsalves said, adding that the ULP requires candidates to have an ability to build and deepen links with the people.

“If you want to be a monk and only stay in your monastery, otherwise known as an office, you’re not fit to be a candidate. You have to build links with the people,” he said, noting that the by-laws also say that candidate must be humble, honest, and have integrity.

“That is why in 21 years you have never heard of any case where anybody got any evidence that anybody inside the ULP government corrupt. NDP may say people corrupt but you can’t find none of us corrupt. No evidence for that.”.

ULP leaders are also expected to be selflessness, Gonsalves said, adding, “If you want go in it for money, join the NDP if you want to be a candidate; join the Green Party, join Jomo non-party,” he further said, in an apparent reference to Jomo Thomas, a former ULP candidate and speaker of the House of Assembly.

Gonsalves said that ULP candidates must have a capacity for being critical and self critical; a capacity for collective work and decision-making; a deep love and caring for people; a profound democratic outlook and leadership skills.

They must also have personal traits that are important to leadership, such as decisiveness, magnanimity, an ability to listen, a willingness to learn, sound judgement, a balanced temperament and a range of humane values of a kind informed by the traditional religious ethic.

They must also have deep respect for constitutionalism and the rule of law; a core set of beliefs, programmes and policies to charge a way forward for “our Caribbean civilisation”.

“When you are looking for a candidate, you look for those things. Don’t just come and tell me that somebody popular because you could be a popular scamp. Talk to me about serious people. You notice, it didn’t say you have to have a university degree because a lot of people who don’t have university degrees have leadership skills.

“Murray, you have a university degree?” he asked businessman Murray Bullock, who is also chairman of the National Lotteries Authority, a state-owned enterprise.

“Murray Bullock ain’t got a university degree, you know. But he is a leader in his own field, he is a serious and disciplined man,” Gonsalves said.

6 replies on “Only disunity can defeat ULP — Gonsalves”