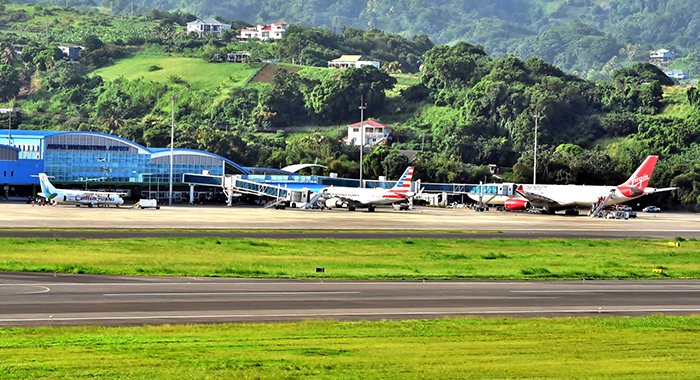 Workers at Argyle International Airport have not received a salary increase since 2017, when the airport opened, replacing ET Joshua Airport, a regional aerodrome.

The Public Service Union said this is among issues it hopes to resolve with the management of the airport by month end, or the workers will shut down the airport by going on strike.

Elroy Boucher, the union’s president, told a recent press conference that the PSU represents 60% of the workers at the airport.

“Before the transition to AIA, when they were at ET Joshua, the job of aviation security, in its different levels, was reclassified at the same time with the reclassification of the public service.

“When they moved to AIA, the salary of the workers went down to just around $1,800. The job was, therefore, devalued in moving from a regional to an international airport, where their responsibilities become greater and their workload heavier.”

Boucher said that the AIA said that the workers have to be evaluated every year and would receive an increment, if the evaluation is favourable.

“They have never been paid one increment in the space of five years of evaluations; not one. So, they are burdened with a greatly reduced salary, a devalued job. And even at that lower value, which take them back to where they were initially at ET Joshua, they have not received one increment.”

The union leader said there are cases in which workers have been wrongfully dismissed, contrary to the laws governing the private sector, under the Protection of Employment Act.

He said that a worker was dismissed recently for failing to return to work the day that his vacation ended, although he fell ill on that day.

“That was used against him to dismiss him,” Boucher said, and pointed out that the Protection of Employment Act says that a worker who calls in sick cannot be dismissed for then, unless they fail to produce a sick leave notice on the third consecutive day of absence.”

He said that the same worker had contracted COVID and had racked up a number of sick days. However, because the worker had exhausted his 14 days of sick leave, he was deemed to have been absent from work, and that was also used to dismiss him.

Boucher said that the union had made all these arguments to Ken Young, the new chairman of the board of directors of AIA.

“Based on what we have seen, the gentleman should be reinstated and when we got back to him he indicated that the board has decided that the dismissal stands.”

He said that the union will appeal the decision at the Labour Department.

For five years, workers have only been given one pair of uniform, Boucher said.

“So there are a lot of issues that are occurring at the Argyle International Airport. The union has been patient with the management,” he said, adding that this was the case because the airport was new.

“We wanted to give time so that all teething problems can be dealt with and we did not want to create any major issues, given the fact that we are just moving to an international airport. That time has since gone… the management … is taking advantage of the fact that we were looking at the national interests, while giving them time to settle themselves.”

He, however, said that workers will withdraw their service if these and other issues are not addressed.

“We will shut down the airport at certain times and the public is going to be affected. But I want the public to understand, taking industrial action is always a last resort and the Public Service Union has been patient to the extent that the workers themselves think that we are not doing enough on their behalf,” Boucher said.

He said that the union has felt the fury of the workers it represents “because they wanted to take industrial action long time.

“They wanted to shut down operation long time, but we ask them to be patient with us so that we give the new chairman of the board of directors, Mr. Ken Young, enough time to have the problems addressed,” he said.

“But if they are not addressed to our satisfaction and workers’ satisfaction, we will call industrial action and shut the airport down on certain days. I just want the public to understand that so that when that time comes and we take action they will understand that these issues were pending for a number of years,” Boucher told the media.