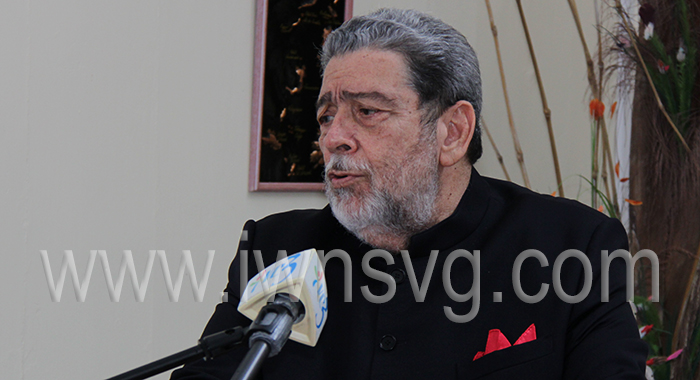 Prime Minister speak at Government House at the swearing-in of Senator Keisal Peters as Minister of Foreign Affairs and Foreign Trade on Friday, Aug. 26, 2022.

Prime Minister Ralph Gonsalves says some of the criticism of Senator Keisal Peters’ appointment as the nation’s first female and youngest Minister of Foreign Affairs is “a simple question of green elemental jealousy”.

He told her swearing-in ceremony at Government House, on Friday, that he has heard some of the criticism, including by women.

“Apparently, their criticism resides in a common matter which has been written repeatedly in the Hebrew Bible and into the New Testament — a simple question of green elemental jealousy. I am speaking very openly and frankly,” said Gonsalves, who Peters replaced as Minister of Foreign Affairs and Foreign Trade, after 21 months as a senator.

“For some reason, they feel that somehow that their class gives them a divine right or some inside track to be the first woman to be foreign minister,” the prime minister said.

“Well, I’m sorry to disappoint you. It is Keisal Melissa Peters,” he said of the 36-year-old lawyer.

“I’m talking policy because we have to speak the matters very frankly, and very honestly,” the prime minister said.

“I will not advert to a matter which had all the hallmarks of gutter politics, nastiness, entirely false. And when I spoke about it we brought that subject to an end.”

He said that people who are “the originators of the falsehood feel that I have done a disservice by rebutting the falsehood and because I have spoken about the falsehood, I only give their lie additional wings.

“That is a cockeyed view of the truth,” Gonsalves said, adding that he rebutted “the falsehood” and his rebuttal is known to the world.

“And the fact of the matter is this: I know that my word in the world counts far more than those who seek to tarnish the good name of Keisal Melissa Peters.”

Gonsalves — who once told Parliament, he “may lie about certain things” — said there are some people who “misunderstand what truth is about.

“I am duty bound, as their leader and because I’m much older than they are, as their veritable patriarch, to defend them when they are maligned,” the 76-year-old leader said.

“And I will do so with all the skill that God and experience have devolved upon me,” he said and congratulated Peters on her appointment.

“We have a big visit to do together at the United Nations General Assembly. It will be your first one.

It would be an excellent experience for you,” Gonsalves told Peters.

“And I’m absolutely sure that you would continue to do your work with the level of commitment, savvy, competence that you ‘will faithfully serve the people of St. Vincent and the Grenadines, so help me God’,” he said, quoting the oath of office.