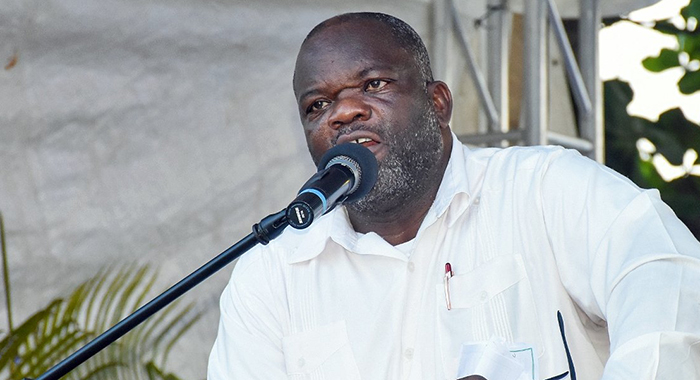 As stakeholders in the education sector “jockey” to shore up their positions amidst the on-going fallout from the COVID-19 vaccine mandate, Education Minister Curtis King says this year’s high school exit examination should be compared with those of 2019.

He made the call as he noted that the results of Caribbean Secondary Education Certificate (CSEC) examinations are slated to be released on Sept. 5.

This year’s are the first CSEC examinations since hundreds of teachers were fired over the vaccine mandate last December and replaced with people who were teaching for the first time, as well as retired educators.

Speaking on radio on Sunday, King, who has ministerial responsibilities for primary and secondary education, said that his ministry was determined that students should return to the classroom last year, despite the explosive eruption of La Soufriere and the COVID-19 pandemic.

A number of schools were used as emergency shelters after the volcano erupted in April 2021 and students only returned to the physical classroom in October.

Then, the vaccine mandate came into effect in December, leaving hundreds of vacancies in the teaching service.

“… we took the decision to have staff in the school, even if it meant rehiring retirees, where they were available, relief teachers, where they could have been accommodated, and redeployment of some persons on the SET programme,” King said on WE FM.

He said that some of the relief teachers perform well, but, just like the regular teaching service, some of the teachers who were employed on contract did a “very poor” job.

“But the system functioned,” he said, adding that for the public, “the only real measure” of how well students perform is their exam results, especially the “high stake” examinations.

He said that in primary schools, this is the CPEA, which, like CSEC, is administered by the Caribbean Examination Council.

This year, the CPEA registered a one-percentage-point decline in the pass rate.

“Now, I don’t know if that signifies that there was a gaping hole in the system,” he said, referring to an allegation by the Teachers’ Union.

The union has said that the dismissal of the teachers over the vaccine mandate has left a gaping hole in the teaching service.

King further noted that school started late and the school year reduced by about one month.

“There was no break, we didn’t have any situation where we had to close schools, because of the absence of teachers and so on and so on,” he  said, adding that the other “high stake” exam is that of the CSEC and, to a lesser extent, Caribbean Advanced Proficiency Examination.

“So, I’m awaiting the result with great anticipation, let us see how the students perform,” King said.

“I’m putting it out there because in this season where people seem to be thinking that ‘Boy, let me jockey and get the advantage’, let me tell you, the last time St. Vincent and Grenadines did the two papers was 2019.”

He said that in 2020, because of the prevailing situation with the pandemic and in the case of SVG, because of the eruption of the volcano, in 2021, students wrote one paper, a multiple choice, in addition to any practical or school-based assessments.

“So I’m saying this year, and that is again, when people talk about gaping holes — this year, we went back to the original format of the exams,” he said.

“That is to say we did two papers,” he said, adding that the only concession from CXC was to delay the exams in SVG.

“Why I say is not a fair comparison because in 2019, it was regular exam. You didn’t have COVID, you didn’t have the volcanic eruption.

“… and that is why I really want to commend the educators, the principals and other leaders, the teachers, the parents, the students, and sponsors and other people who support education in 2022,” King said.