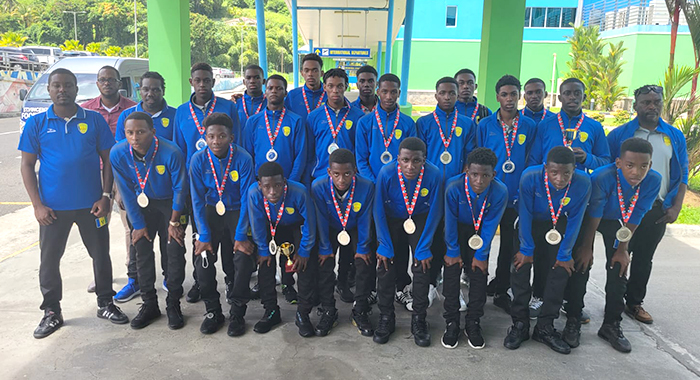 The National U-17 males football team competed in the Pride of the Caribbean U-17 Tournament in Antigua and Barbuda from Aug. 22 to 28, winning two and losing one of their three matches in the preliminary stage.

In the first match, on Aug. 23, the team registered a 3-2 victory against Antigua and Barbuda.

Isiah Charles was the lone goal scorer for SVG.

The team came back with a 3-1 victory against Grenada on Aug. 26.

Donte Enville scored the first goal and Isiah Charles netted the two others.

The team then advanced to the finals where they played against first place in the group, St. Lucia with the score at 1-1 at the end of regulation time.

This saw St. Lucia emerging as the champions after penalty kicks resulted in a 5–3 victory.

MVP and Top Goal Scorer was awarded to Isiah Charles and Imani Miller received the Best Midfielder of the tournament award.

“The SVGFF is very proud of our boys’ performance and continues to strive towards the holistic development of our players,” it said in a press release.