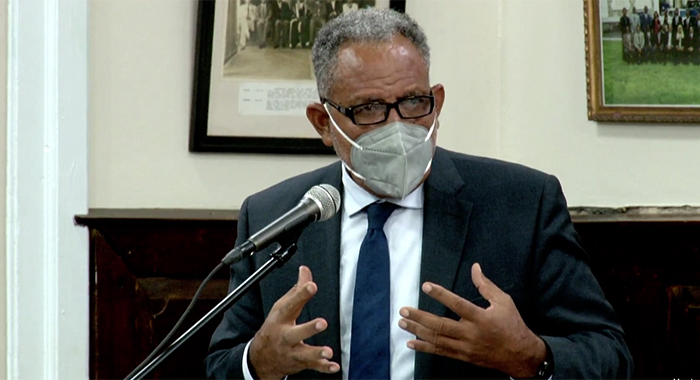 The Ralph Gonsalves government is being called upon to pay urgent attention to the “cost of living crisis” in St. Vincent and the Grenadines, especially as school is about to open.

“…this is such a serious matter for people now. Every day, I see people who are finding it so difficult. And they’re so patient. The circumstances are grave in their homes, because you can’t put nothing on the table for your children,” Opposition Leader Godwin Friday said on Monday.

He said that especially with the reopening of school around the corner, some people  “simply don’t know where to turn to get it.

“This has magnified the cost of living crisis that I spoke about,” he said, referring to his national address last month, in which he outlined the opposition’s proposal to help people cope with the rising cost of living.

In his weekly programme on NICE Radio on Monday, the opposition leader said there was a “need to urge government to do more to assist people to cope with the rising costs of everyday goods — food, clothing, building materials so that they can see the light at the end of the tunnel; that they have some hope”.

He said it cannot be a situation where people feel that things are “going to get worse and worse.

“And when people lose hope, all kinds of things suffer as a consequence,” the opposition leader said, adding, “And we have to as a people have a sense that there’s a plan for us to go forward.”

Friday said that the government does not speak about this, but, instead announces this or that appointment or that they have money to fund a project.

“… how this is going to make life better for the people in the country? How are they going to alleviate the current hardship that people are feeling with respect to their grocery bills, electricity bills, cooking gas bills, the ordinary things that people do from day to day and they’re finding it now beyond their reach?

“When that is beyond their reach, then it means that our country, our society is going backwards, we’re going in the wrong direction.”

He said that within the Organisation of Eastern Caribbean States, Vincentians get the lowest wages and pay the highest taxes and also top the list in terms of youth unemployment.

“… and yet you have a situation where there are jobs being created and projects … foreign workers are getting jobs that really ought to be going to our local people,” Friday said, noting that he had expressed concern about foreigners employed on the construction of the Beaches Resort at Buccament Bay.

He said that some people cannot afford basic medicine and others who need to go to the hospital to have surgery “can’t find something to eat when they come back or before they go.

He said COVID-19 and other factors have made the situation difficult but other countries have rebounded from the pandemic.

“Tourism is flourishing in some countries but not here in St. Vincent,” Friday said, even as he acknowledged the April 2021 eruption of La Soufriere volcano.

“… there’s a lot of assistance that was provided that should have been delivered already to the people who have been affected, so that they can then start living, pick up their lives again.

“Spend the money so that the people can benefit from it, and that they can continue with their productive lives. While they are on hold, they are suffering as a family, but the economy overall suffers as well.”

The opposition leader said that part of the challenge is because the government’s own financial resources are limited by the fact that the debt is already so high, and a lot of the money that the government raises must go to debt servicing.

“But if the government’s own fiscal space, they are limited by the fact that you have so much national debt that the government really can’t manoeuvre when it’s borrowing more and more, to invest in projects, and to and to do programs, it makes it very difficult.”

Friday said this is an issue that his New Democratic Party has raised over the years, including under the leadership of then opposition leader, Arnhim Eustace.

“… when Mr. Eustace raised this matter and said that it’s not a matter of you being afraid to do things or too cautious to do things, it’s that there is no free lunch in this world. Yes, you must assist persons but the government has to have the capacity to do so.”

He said the government can assist people if it manages its finances in such a way that it has a surplus set aside that can be used to help.

“… this government, for the years that I have been in Parliament, has always been running deficit budgets and so forth. They never have enough money to cover what they say the budget is supposed to do,” said Friday, who has been MP for the Northern Grenadines since 2001.

“It was the opposite under the New Democratic Party,” Friday said of the party, which was in office from 1984 to June 2001.

“They always generated a surplus on the current account so they can use that to assist in capital projects or to assist in social programmes, if necessary.

“Government is not able to assist them in the way that they had expected, had come to expect in the past, and they have their obligations to meet,” he said.