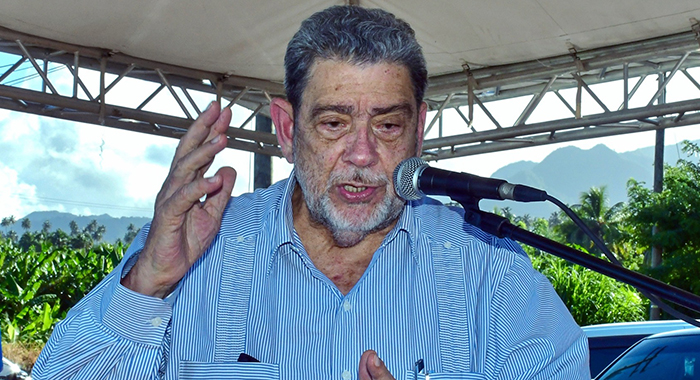 Prime Minister Ralph Gonsalves has telegraphed his government’s response to two public sector unions’ request for a 10% increase in salary over two years, as well as other proposals in response to the rising cost of living.

“Well, that would cost about $35 million,” he said on radio on Wednesday, one day before a scheduled meeting between the government and the trade unions.

In an Aug. 29 press release, the Public Service Union and the Teachers’ Union said that earlier this year, the Ministry of Finance agreed to negotiations later in the year to discuss the possibility of salary/wage increases, as well as pension reform.

The unions said they are aware of the impact of the COVID-19 pandemic and the La Soufriere volcanic eruption, adding that the war in Ukraine has caused oil prices to skyrocket, leading to increases in transportation and production costs, which impact consumers worldwide.

The unions said that all of these factors have contributed to the skyrocketing cost of living in St. Vincent and the Grenadines.

The unions said that on Aug. 23 they submitted to the government a list of proposed ways “to alleviate the burden for workers, as we navigate our way forward”.

“We believe that the abrupt rise in the cost of living is one to be seriously considered when discussing workers’ remuneration; as it speaks directly to one’s spending power and therefore their standard of living and ability to survive.”

It said these increases both lie below the forecast GDP growth by the Eastern Caribbean Central Bank and International Monetary Fund (IMF) for the stated period.

The unions also proposed that the government raise the standard deduction for personal income tax from EC$20,000 to EC$25,000.

The union also proposed price control, saying that at least one government has capped the price of fuel as well as certain food commodities.

They called for a temporary suspension of the one percentage point increase on the customs service charge “among other things” and a reduction in income taxes, saying that the details on this would be submitted.

The prime minister said he did a ‘back-of-the-envelope” calculation on the elements of the union’s proposal that were “quantifiable” and it amounted to EC$115-120 million.

“The Ministry of Finance officials put the number at 145.6 million,” the prime minister said, adding that whereas he had used a recent historical average, the public servants had used the current figures, which are higher.

He noted that the government spends EC$30 million for wages, salaries, and allowances to public sector workers.

“If you put a proposal, which going costs 120-125 million, in my formulation,  $146 million in the officials in the Ministry of Finance’s formulation. You’re talking a number anything between four months and close to five months’ salaries,” the prime minister said.

“You can’t just throw the kitchen sink and say you are being responsible.”

Noting that he was “not doing any negotiations in public” but was putting information out for “the public’s edification”, the prime minister said that in 2020, the government gave a 2% increase in salaries.

“But the economy went in the hole 5.3% because of COVID. And half of the public servants who were not at the top of the scale got an increment, an in-built increment of 2%, on average,” he said, adding that every public sector worker saw a salary increase of at least 2% .

“But the economy in the country went down by 5.3% because of COVID. And there are a lot of people who suffered loss of jobs and all the rest,” Gonsalves said.

“How could that be reasonable that this year, because there is some economic growth, that you want to get the whole chunk of it? What about other people?”

Economy yet to return to 2018 levels

“So, by the end of this year, the nominal growth would be ahead of what we were in 2018 and what we were in 2019. But in the period when we went down in the hole, the public servants got increases because those were arranged in advance,” Gonsalves said.

“So, I’m raising these things about reasonableness,” the prime minister said, adding that he, as well as his finance minister, Camillo Gonsalves, “had made the point that government will deliver a salary increase for the public servants and want to do so, for 2023, 2024, 2025.

“But we have to do this thing reasonably. Because if you increase the wealth of the country everybody has to get a piece of it.”

He said that the government has to “put something aside” because of the downside risk to the economy.

He said public servants receive “phenomenal benefits” in the form of a pension to which they do not contribute as well as a contributory pension from the National Insurance Services.

The prime minister said there are only a few countries in the world where public sector workers get two pensions.

“And in eight years time, … by 2030, the NIS money and the state pension when you add them together … will rise to up to 120% of your last salary. Who you think going pay for that? Your children and your grandchildren,” Gonsalves said.