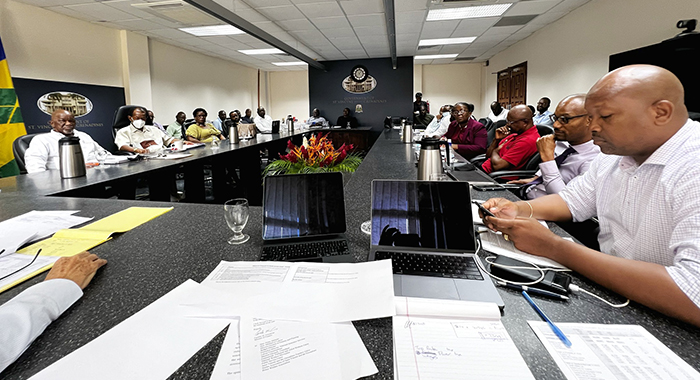 The meeting between the government and public sector unions on Thursday, Sept. 8, 2022. (Photo: Camillo Gonsalves/Facebook)

Public sector unions in St. Vincent and the Grenadines have reached an agreement with the government regarding a salary increase.

“… we decided to accept a three-year salary increase beginning next year,” President of the Teachers Union, Oswald Robinson, said in a voice note to union members and the public on Friday, one day after the talks.

On Thursday, the Ministry of Finance and other government officials met with the Teachers’ Union, Public Service Union, and Commercial and Technical Allied Workers Union to discuss a proposed salary increase.

“The discussion with the Ministry of Finance is not conclusive. That is just the beginning. I want to make that abundantly clear,” Robinson said.

“Because we are yet to finalise the actual increases we want for each year. The union’s proposal is 10%. Now we are looking at a three-year [increase], we will revisit that 10%,” Robinson said.

He said that the meeting also decided that the government will set up a negotiating team to meet with the unions.

“We have also agreed to raise the tax threshold,” he said, adding that currently, people begin paying income tax once they make EC$20,000 annually.

“So we want to move it up to about $22,000. And also to reduce the income for persons in the higher income bracket  — to reduce the tax on those income,” Robinson said.

He said his was a preliminary update and he would speak in greater details about the discussions with the government.

Ahead of the talks last week, the Public Service Union and the Teachers’ Union issued a joint press statement saying they were proposing a salary increase of 10% over two years — 4% to be given retroactively from January 2022 and 6% from January 2023.

It said these increases both lie below the forecast GDP growth by the Eastern Caribbean Central Bank and International Monetary Fund for the stated period.

The unions also proposed that the government raise the standard deduction for personal income tax from EC$20,000 to EC$25,000.

The union also proposed price control, saying that at least one government has capped the price of fuel as well as certain food commodities.

They called for a temporary suspension of the one percentage point increase on the customs service charge “among other things” and a reduction in income taxes, saying that the details on this would be submitted.

Speaking ahead of the talks, Prime Minister Ralph Gonsalves said the unions’ proposal could cost the government around EC$145.6 million annually.

One reply on “Union, govt reach agreement on salary increase ”