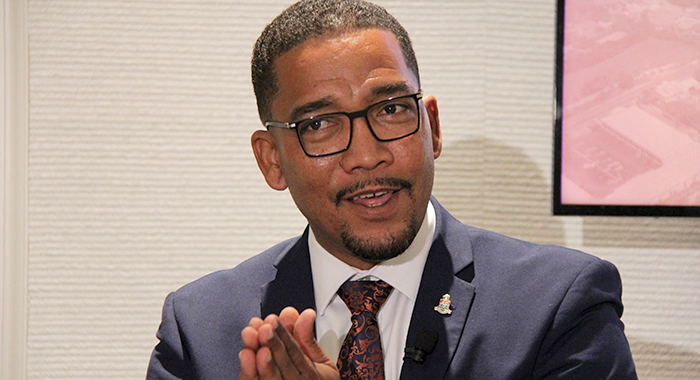 GEORGE TOWN, Cayman Islands (CMC) — Cayman Islands Minister of Tourism, Kenneth Bryan, has been elected as the new chairman of the Barbados-based Caribbean Tourism Organization (CTO) and his first order of business is likely to be a response for the region to market itself as single destination.

Bryan replaces Barbados Tourism Minister Lisa Cummins in the position for the next two years, acknowledging “that there needs to be some reform and restructuring, particularly with respect to air travel and marketing.

“So I’m ready to take on the challenge, in collaboration with my regional colleagues, of finding a new way forward, as well as addressing any issues we have within the organisation to improve efficiency and focus,” he told the CTO’s general meeting.

Bryan and his newly appointed chairman of the CTO board of directors, Rosa Harris, the Cayman Islands director of tourism were present, on Wednesday, when the International Air Transport Association (IATA) Vice President for the Americas, Peter Cerdá, said that travel and tourism in the sector needs “more than just good sounding words and declarations.

“We need action,” Cerdá told the Caribbean Aviation Day conference as he presented a case for marketing the region as a single destination.

“Selling and marketing the Caribbean as a multi-destination is becoming increasingly important as inflationary pressures will have an adverse effect on disposable incomes in some of the key source markets like Canada, Europe and the USA.

“When holiday makers will be deciding where they will spend their valuable vacation days and budgets, being able to offer a variety of experiences will be key. And when they fly, today’s travellers are also looking for a seamless/simplified experience.”

“Together with those in charge at government level, we need to urgently move into the digital age to provide a better customer experience and more efficient and secure airline operations.”

The IATA president said the “good news” is that many governments went down that path when it came to providing travel authorisations during the height of the pandemic.

“So we need to build on these experiences moving forward, rather than return to the old and inefficient ways,” he said, noting that the region had “the perfect opportunity to revolutionise back in 2007” when it hosted the Cricket World Cup and created a single domestic space arrangement for the free movement of visitors.

“What will it take to stop the chatter and, like the Nike slogan states ‘just do it’?” Cerdá said, adding that as more regions across the globe work on attracting tourists, “those in power across the Caribbean must take a more holistic approach to this subject, rather than an individual one.

“Offering the Caribbean as a multi-destination region with good, efficient and affordable global and regional connectivity will create a unique selling proposition,” he said, saying  it will allow aviation to contribute to the socio-economic development of the region and its people.

“From an industry perspective we stand ready to play our role and we hope the discussions and presentations of today’s event will encourage governments to actually implement the necessary framework for us to jointly move forward,” Cerdá said.

The IATA vice president said that in the Caribbean, the post pandemic recovery is even faster as the region reached 81 per cent of pre-crisis levels in June.

Some markets, such as the Dominican Republic have already surpassed 2019 levels, Cerdá said, adding that while international connectivity between the Caribbean, the Americas and Europe has largely been restored, traveling within the region remains a challenge.

“We have only reached 60% of intra-Caribbean passenger levels compared to 2019 and in many cases the only way to reach other islands is via Miami or Panama.”

Cerdá said that while the intra-Caribbean market is not the size of regional markets in many parts of the world,  it is a market which needs to be served, not only for the good of local residents and businesses, but also to facilitate multi-destination tourism.”

He noted the interdependences between aviation and tourism, saying that the   industry contributed 13.9 per cent to gross domestic product (GDP) and 15.2 per cent of all jobs in Caribbean pre-pandemic in 2019, with the WTTC saying that eight out of the 10 most tourism-dependent countries globally in 2019 were in the Caribbean region.

Cerdá said that while countries like Antigua and Barbuda and St. Lucia were among the first to start accepting tourists for the 2020 winter season, “the diverging and fast changing travel restrictions placed a large administrative and operational burden on airlines, curtailing demand”.

He said that one of the lessons learned from the past two years is that governments and the aviation value chain must find better ways to cooperate and communicate on a holistic level, with the aim of jointly ensuring the socio-economic wellbeing of this region.

“What we saw during the pandemic was that the decision making shifted to the ministries of health, who previously had not been part of the traditional aviation value chain,” Cerdá said, adding that at times, “the lack of knowledge and understanding of the intricacies of our business led to the