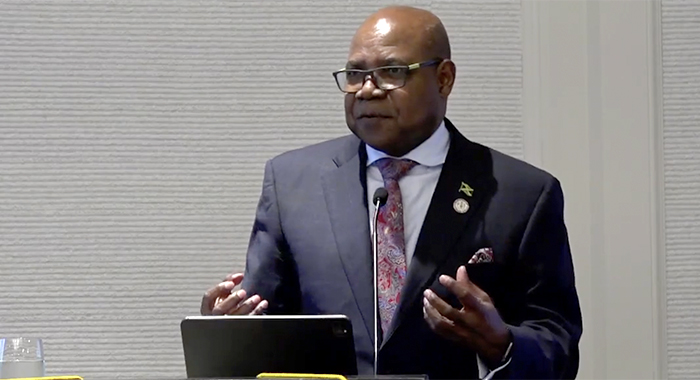 GEORGE TOWN, Cayman Islands (CMC) — Jamaica will host the first Global Tourism Resilience Day on Feb. 15, 2023 at the regional headquarters of the University of the West Indies (UWI) in Mona, the island’s Tourism Minister Edmund Bartlett has announced.

Bartlett said the Global Tourism Resilience and Crisis Management Centre, which is established at the UWI in Jamaica and has six satellite centres in six countries across the world, will be inaugurating the event.

It will be held in collaboration with the Barbados-based Caribbean Tourism Organization (CTO), the World Travel Awards, the International Tourism Investment Conference and the Global Tourism Resilience Council of London.

“That event will be celebrated in the frame of a global resilience conference that will consist of three parts and will cover three days beginning the 15th of February and that will be dedicated to the investment forum,” Bartlett announced Wednesday night during the CTO’s “Destination Media Briefing” held as part of activities for the CTO Business Meetings and Caribbean Aviation Day Event, which ends on Thursday.

On the second day, February 16 will see the hosting of the first Caribbean-African Tourism Forum and at least 10 African ministers of tourism will collaborate with the ministers of the CTO “as we look at ways and means to join Africa and the Caribbean in a tourism convergence first in history”.

Bartlett said that Kenya, is host of one of the tourism resilience centre, at the Kenyatta University in Nairobi and covers the eastern Africa, as well as Rwanda, Namibia, Botswana, Ghana, Nigeria, Liberia and South Africa are expected to attend the event.

“And then within the Indian Ocean realm, which is pretty close to Africa and is sometimes called the Africa, Seychelles, the Maldives,” Bartlett said, adding that the Maldivian minister of foreign affairs who is also the president of the UN General Assembly, visited Jamaica last weekend.

“We’ve also structured an arrangement for a centre to be in the Maldives because the Maldives is the most vulnerable of all the highly-tourism-dependent countries in the world. And that’s what we do with the centre. So the African ministers are pretty much on board. I’ll be doing a tour shortly during the latter part of the year; I’m visiting some of them to ensure tidy up that arrangement,” Bartlett said.

“We’re excited about that prospect because it’s opening new markets. Africa is the new frontier. And this post COVID recovery is offering an opportunity for new markets and already I’ve had discussions with the airlines in Africa,” he said, adding that he has met with RwandAir and expects the president of RwandAir to attend the event.

“I’ve had discussions with Kenyan airlines, as well as Ethiopian,” Bartlett said, adding that Ethiopian Airlines “is the best airline in Africa, by far.

“In addition, we will be taking a delegation of Caribbean ministers to Saudi Arabia in November to meet with our counterpart there who we already have an MOU with and we’ll be working with the GCC mega airlines. That is Emirates, Qatar, Saudi, Etihad and also the Royal Jordanian airline thinking about how we can enable the opening of the Middle East gateway to the Caribbean,” Bartlett said.

“So February 15 to 17 is going to be a major period for Caribbean tourism. And Jamaica is particularly honoured to provide the setting for it. And the Global Tourism Resilience and Crisis Management Centre, in particular, would be a forum that will enable this powerful discourse between Africa, the Caribbean, the Middle East and the Caribbean.”

The Jamaica tourism minister said the conference is very important if regional tourism is not only to recover to but grow beyond 2019 levels.

He said that most Caribbean destinations are recovering well. “But the challenge is to go 2019, because now you will be growing against a different volume.

“You’ll be growing against where you were two and a half years ago. The reality of recovery is that those who are fortunate enough to recover from where they were rarely grow beyond,” Bartlett said, adding that in most destinations, especially in the Caribbean where there have been disruptions, “they have not recovered, they have receded.

“So recovery is really a very strong and arduous task. But growth after recovery is rare and precious. And so part of my mission is to get there to have growth and so that’s why the new markets, that’s why the gateway through the Middle East, which will connect us with Asia, with India, with China, with Northern Africa and the Levant countries through the Jordanian gateway. So I’m excited about that prospect.”

He said a third direction is in the Commonwealth, which has 56 countries and nearly three billion people, including India, Canada, Australia, South Africa, Maldives, the Indian Ocean rim and the Pacific.

“The Commonwealth represents the greatest possibility for real convergence with tourism, where soft power and diplomacy can engage to provide a flow of wealth among us and what we have to do is to develop the harmonisation of protocols within that geographic space to enable for airlift arrangements, air connectivity to allow for open skies agreements and freedoms that can make sense and freedom for example, which will allow for movement within countries and for countries to allow airlines to transport from one entry port in their country to another.”

“And the Caribbean has to look there … But these are areas of visitor facilitation that are not beyond us. And once we can look at our harmonisation of these protocols, we can then enable very active movement and the transfer of wealth among ourselves,” Bartlett told the ceremony.