‘Absolutely not!’ PM Gonsalves says to holiday for Queen’s funeral 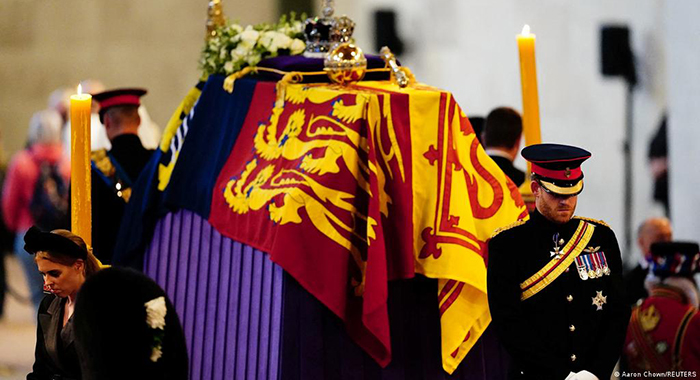 There is no holiday in St. Vincent and the Grenadines today (Monday), the day of the funeral of Queen Elizabeth II, who was the nation’s head of state until her death on Sept. 8.

“Absolutely not!” Prime Minister Ralph Gonsalves said on radio on Sunday when asked.

“I don’t know where people got that idea from,” said Gonsalves, who is personally and politically opposed to the British monarch being head of state in SVG.

“I have been advised, I am not sure, that Antigua and Barbuda and Jamaica — I don’t know if anywhere else — have given holidays,” Gonsalves said, referring to two other Caribbean countries of which the British monarch is head of state.

“But, what is the logic of having a holiday on the day when Her Majesty is being buried in England? She is not being buried here,” Gonsalves said on WE FM.

“A holiday to do what? To watch it on TV? That is going to be played over umpteen times. So those who go to work and they miss it, they can watch it later when they go home,” he said.

“You can rest assured that Sky TV and BBC and maybe our own local TV station — in fact, you can watch it on YouTube at any hour.”

Asked what did SVG do officially to mark the passing of the queen, the prime minister said that the flag is being flown at half-mast.

He said they will continue to fly at half-mast for seven days following, which is the official period of mourning.

The prime minister further said that a condolence book has been opened at Government House.

“And I personally have sent messages through the appropriate sources…”

He further noted that Governor General Dame Susan Dougan is representing the SVG at the funeral.

“And, we have issued the proclamation under the hand of the governor general’s deputy in relation to King Charles III,” the prime minister said.

He said he saw and approved the draft proclamation, on Friday, and it should have been signed on Saturday but he was yet to see the gazetted copy.

The prime minister said that when Parliament is conveyed, “there would be an occasion to pay tribute to Her Majesty”.

Gonsalves said he was thinking that perhaps the next sitting of Parliament, slated for Oct. 10, should be postponed until after the funeral of the five men from Clare Valley who died in the minibus accident in Sandy Bay on Sept. 11.

“The last occasion when there was such a disaster – Rock Gutter — we had postponed Parliament until after the funeral…” he said, noting that he had been scheduled to deliver his budget address on Jan. 12, 2015, the day of the tragedy.

“It may well be that we should not be in Parliament until after the funeral. In other words, we should pay the respect and when we do that, we can also speak toward Her Majesty,” the prime minister said, adding that he was mulling over the matter in his head.

Gonsalves was speaking before leaving for the United States, where he would attend the annual UN General Assembly meetings. He was also slated to travel to London and Wales on official duties.

The British monarch remains head of state in SVG as the electorate, in 2009, rejected proposed changes to the 1979 independence constitution left by the British.

Among other things, the revised constitution proposed that SVG become a republic with a ceremonial president as head of state.

Earlier this year, Gonsalves suggested to Parliament that the country has a single-item referendum: replacing the British monarch with a ceremonial president.

He said he would only engage the electorate on the matter if the parliamentary opposition supported the proposal.

5 replies on “‘Absolutely not!’ PM Gonsalves says to holiday for Queen’s funeral”