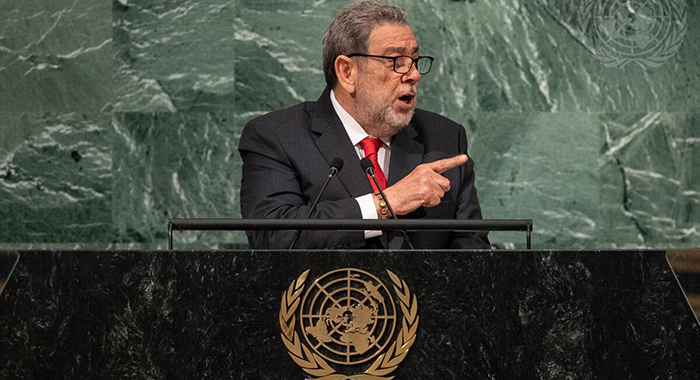 UNITED Nations (CMC) – Amid what he describes as an “increasingly sense of despair” globally, St. Vincent and the Grenadines (SVG) Prime Minister Ralph Gonsalves, on Saturday, said it is time to “embrace fresh hope.”

“This existential longing that touches the human spirit and sou, goes beyond a mere amelioration of our current travails,” he told the 77th Session of the United Nations General Assembly. “It demands correctives or reformations of a structural or fundamental kind, and fresh thinking. Without fresh hope, a desecration of our future awaits us.”

Gonsalves said fresh ideas are a core foundation of fresh hope, stating that, over 130 years ago, the Cuban patriot José Marti advised that “weapons of the mind…vanquish all others.”

“Through Marti we learn that ‘a vital idea set ablaze before the world at the right moment can, like the mystic banner of the last judgement, stop a fleet of battleships’,” the prime minister said. “Our tumultuous times demand fresh ideas and an invigoration of those which have stood the test of time in the march of civilisations into modernity and uplifting governance.

“Unfortunately, stale and outmoded thinking too often shapes, and dominates, the global outlook and conduct of the most powerful nations to the detriment of peace, security and prosperity for all,” he said.

For example, the Vincentian prime minister said “at least one mighty state affirms wrongly that it possesses an exceptionalism grounded in a manifest destiny to rule the world; another considers, also wrongly, that its population size, growing wealth, enlarged military prowess, and a civilisation that goes back to near antiquity, justifies its quest for global hegemony; and still others, not quite behemoths, conjure up ancient glories and historic empires as the illusory bases to reconstruct the past, oblivious to the fact that any such presumed future of unalloyed grandeur is actually  behind them.

“Amidst all this competitive jostling for power and vainglory, confusion reigns and the overwhelmingly majority of the world’s population suffers,” Gonsalves said. “It is instructive to note that the contemporary circumstances of the global political economy and society have prompted the powerful and some ‘wannabe’ powerful countries to proclaim the necessity to construct a ‘New World Order’, each with its own peculiar agenda.

“But from the global periphery, which encompasses most of humanity, I ask the relevant and haunting questions: what’s new? which world? and who gives the orders? The future of humanity depends on satisfactory answers to these queries,” he added.

In this maelstrom, Gonsalves said, the centre cannot hold, stating that “things are falling apart.”

“Yet, we must not wring our hands, metaphorically, in learned helplessness,” he said. “The principals are certainly not innocent of the extant condition, and there are bundles of credible ideas in our multilateral system to fashion possible lasting solutions in pursuit of peace, prosperity, sustainable development, and security for humanity as a whole.  So, where do we go from here?”

Central to a credible, equitable path forward for humanity and civilised life, living and production, the prime minister said is the “requisite of quality global leadership.”

“It is a truism that, usually, men and women make history only to the extent that the circumstances of history and contemporary reality, permit them so to make,” he said. “But it is also true, indeed necessary and desirable, for global leadership to transcend the existing circumstances, given and transmitted from the past, and to push the boundaries of possibilities, for humanity’s sake, beyond the normally-considered outer limits.

“I am satisfied that the world’s peoples are demanding a quality global leadership which not only inspires them, but draws out of them their goodness, elemental yearnings of humanity, and nobility of purpose; oft-times to draw out of them this goodness, humanity and nobility, which the people themselves may not as yet know that they possess,” he added.

The Vincentian leader questioned why the “illegal, unjust economic embargo, undeclared war, and criminal interventions against Cuba permitted to continue without let up, despite overwhelming, near-unanimous denunciation by this General Assembly?”

He also asked: “Why do we not resist unequivocally the sordid attempts by imperialism to subvert the duly-elected governments of the Bolivarian Republic of Venezuela and the Republic of Nicaragua?  How can we stand askance, in relative silence, and contented inaction, in disregard of Taiwan’s legitimate right to exist in accord with the wishes, and will of the Taiwanese people?  Why do we not encourage peace and security across the Taiwan Straits by, among other things, permitting Taiwan’s participation in the specialised agencies of relevance in the United Nations’ system such as the World Health Organisation and the International Civil Aviation Organization?”

Gonsalves said all these, and other, 20th century quarrels and contentions have potentially viable solutions, or at the very least, mutually acceptable levels of dissatisfaction, lodged within a framework of peace and security.

“Quality global leadership, in communion with the world’s peoples, credible ideas for resolution, and a coherent multilateralism grounded in international law, constitute the only viable way forward for humanity,” he said. “In short, let us give mature diplomacy a chance to succeed.”