Man, 23, who murdered his father with a hoe gets 16 years in jail 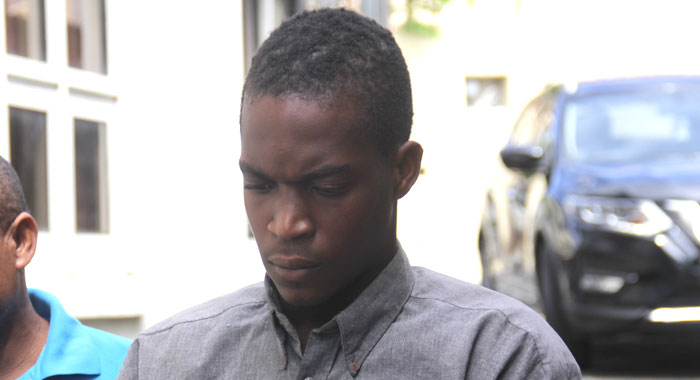 A 23-year-old man who used a hoe to beat his 59-year-old father to death then buried him in a shallow grave three years ago, has been sentenced to 16 years in prison.

Keron Samuel claimed that his father, George Benjamin Samuel aka Coban, 59, both of Evesahm, had sexually abused him when he was aged 16-18.

The defendant further said his father had begun to physically assault him when he struck him three times in the head and face with the hoe, killing him at his (George’s) home on Sept. 30. 2019.

However, in handing down the sentence at High Court No. 1, in Kingstown, on Friday, Justice Brian Cottle, noted that it is not usual for people to store garden implements under a bed.

Keron had said that he had taken the hoe with which he murdered his father from under a bed,

The defendant did not have a lawyer at his arraignment on May 4. 2022, when he pleaded not guilty.

The court appointed a lawyer for him and then on July 1, after being advised by his lawyer, Keron asked that the charge be put to him again and pleaded guilty to his father’s murder.

The facts, as presented by the judge, are that on Oct. 1, 2019, George’s wife, the defendant’s mother, did not find her husband when she went looking for him at the house where he lived with Keron and another of their sons.

She called his cellular phone and it rang in a basket inside the house.

While searching near the home, the woman noticed what appeared to be spots of blood on the ground and also saw disturbed earth near a shrub in the garden.

The police were summoned and while she awaited their arrival, she asked Keron when was the last he had seen his father, and he said he believed it was the day before.

When the police arrived, the area of the disturbed soil was excavated and Samuel’s body was found there.

The body was dressed in a sweater but was nude from the waist down.

A neighbour told the police that he had witnessed an altercation between the defendant and his father two days before the body was found.

The neighbour said that the defendant had threatened to kill his father and had swung a cutlass at his father, who was able to run away.

The defendant confessed to police that there was a quarrel between him and his father on Sept. 29, 2019 and he struck his father with a hoe in the head three times, killing him.

He told the police he dragged the body to a field nearby and buried it in a shallow grave and used leaves and shrubs to cover the area where he had buried the body.

The defendant further told investigators that he went to the area the following morning and swept away the path where had dragged the body and cleaned up inside the house, where the killing took place.

The judge pointed out that Samuel was 20 years old at the time of the offence and has two siblings, a sister 11 years older and a brother 12 years his senior.

Before his arrest he had no known psychiatric issues but was subsequently evaluated and was initially diagnosed in March 2022 as suffering from major depressive disorder.

In 2022, he was again evaluated and diagnosed with bipolar II disorder, for which medication was prescribed.

He worked odd jobs as a farm labourer, yard boy and a mason’s apprentice.

His community sees him as generally quiet and not prone to violence and was shocked by the news that he had killed his father.

Keron further reported that his father had sexually abused him when he was aged 16-18, at which point the left to go and live with other relatives.

He said he could not bring himself to report the abuse to his mother, who he felt had not paid him sufficient attention.

None of Keron’s older siblings said they were aware that he was abused.

Keron said the relatives with which he went to live did not treat him well and he was unable to find lodging on his own and, therefore, he begged to return home.

He said that on the night of the killing, his father had begun to physically assault him and this led him to get the hoe from under the bed and use it to kill his father.

He further explained that the court is obliged to follow the sentencing guidelines, unless doing so leads to injustice in a particular case.

Justice Cottle said an adult convicted of murder could be sentenced to death, a whole life sentence or determinate sentence.

Where the convicted person is found to suffer from a relevant mental illness, the court can order that they be detained at its pleasure.

The judge established a starting point of 30 years because Keron had the hoe at the scene available to use as a weapon.

“I note that it is not usual for persons to store garden implements under a bed,” the judge said. “He used that hoe to kill his father. At the time of the offence, he was an adult.”

Aggravating is that the offence occurred at the home of the victim the judge said, adding that this is usually an aggravating feature, but noted that the Keron also lived there also.

He noted that a weapon was used and the body was disposed of.

Justice Cottle said that the prosecution had asked the court to factor into its sentence the alarming prevalence of homicides in St. Vincent and the Grenadines.

“But, in the absence of evidence of prevalence rate, I am not able to do so,” the judge said.

He found no relevant mitigating features of the offence.

Regarding the aggravating features of the offender, the judge noted that the prosecution suggested that Keron’s actions after the murder in his concealment of the body are aggravating.

He, however, said that having taken this into consideration as an aggravating feature of the offence, could lead to double counting.

The judge saw no other aggravating feature of the offender, but said that mitigating on his behalf was that he was 20 at the time and there is hope for his rehabilitation.

Further, Keron expressed genuine remorse and pleaded guilty. In so doing, he has spared his family having to go through the trial of a son for his father’s murder.

The judge said that the court saw as a mitigating feature of the offender the abuse he suffered at the hand of his father and that he may have had undiagnosed, untreated mental health issues at the time of the killing but they do not amount to diminished responsibility.

The court found that the aggravating features outweigh the mitigating one and reduced the starting sentence by six years.

From the notional sentence of 24 years, the court subtracted one-third for the guilty plea, Keron having done so as soon as he received legal advice.

The discount brought the notional sentence down to 16 years imprisonment.

From that sentence, the court subtracted the two years, 11 months and 18 days that Kern spent on remand, which means that he will serve a further 13 years and 12 days from today.

One reply on “Man, 23, who murdered his father with a hoe gets 16 years in jail”