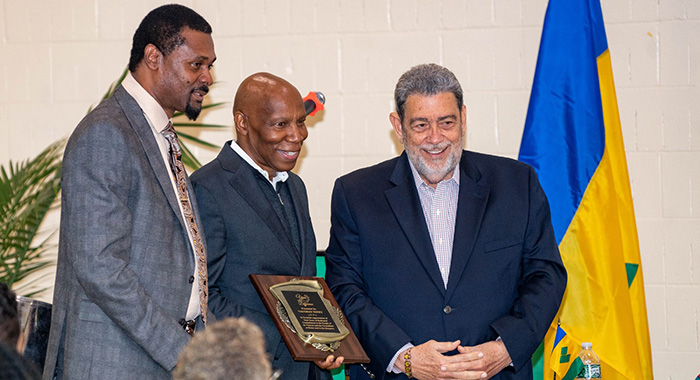 St. Vincent and the Grenadines has appointed New York-based Vincentian Vaughan Toney as an ambassador-at-large, a diplomat with special duties who may be sent to more than one government.

Prime Minister Ralph Gonsalves made the announcement at an event at Friends of Crown Heights Educational Center in New York, on Saturday, during the “Vincy Diaspora Dialogue”.

Gonsalves’ announcement came after SVG’s Consul General to New York, Rondy “Luta” Mc Intosh presented Toney with an award on behalf of the government and the Vincentian diaspora.

Before presenting the award, and before identifying Toney by name, Mc Intosh said he grew up in Calliaqua and next to where his mother lives, there is a family that owns a shop.

He said he could see a gentleman come home from time to time who was pleasant, calm and cool and would greet and help people.

“But that is the most I know about the gentleman and his name,” Mc Intosh said.

The diplomat said he later began to visit New York to perform his music. “… and I go through the community, if I meet 10 Vincentians, three out of those 10 Vincentians, maybe even higher, would call this man’s name — he gave them a start; he hired them when they just came here; gave them a cooking job.”

Mc Intosh said that as recently as two weeks ago, he received a call from someone seeking to repatriate their mother’s body.

Mc Intosh said that when he used to perform on “the Parkway”, people would tell him that the man had sponsored the entire sound system and t-shirts, and was also a sponsor of shows in which he performed.

“I keep wondering, ‘Who is this man?’ I know him but I really didn’t get to know him until I get here to New York. He has a long impressive resume…” Mc Intosh said.

Mc Intosh called Toney to the podium and, in presenting the award, said:

“This is just a little token; it is not a representation and cannot compensate for what you would have done for our community. Almost every function as well that takes place in New York City or in Brooklyn happens at Friends of Crown Heights free of cost; no charge. And, the Consulate of SVG to the United States, our ambassador, Lou-Anne Gilchrist, the SVG Diaspora Committee and everyone would like to say thank you, thank you, thank you very much.”

After Mc Intosh’s presentation, Gonsalves took to the microphone and said:

“I just want to, in as much as this is the time of recognition of our brother, Vaughan Toney. When I came tonight, I sought his permission on a matter which the government has taken a decision on, to appoint Vaughan Toney as an Ambassador-at-Large for the Government of St. Vincent and the Grenadines.

“The cabinet secretary will be available at the first opportunity to provide His Excellency Mr. Vaughan Toney with the diplomatic passport.”

In his response, Toney told the audience, “Let me say this: I have lots of recognition and awards in my office but there’s nothing more gratifying than to be recognised by your own people, the people of St. Vincent and the Grenadines. So Let me say that I am humbled, I am honoured but above all I am inspired — inspired to continue to do the work that has brought me to this very moment.”

Apart from updating the diaspora on matters related to SVG, the prime minister also distributed copies of his latest book, his 10th, titled, “A Time of Respair – Beyond COVID, Volcanic Eruptions, Hurricane Elsa, and Global Turmoil: Fresh Hope for St. Vincent & the Grenadines”.