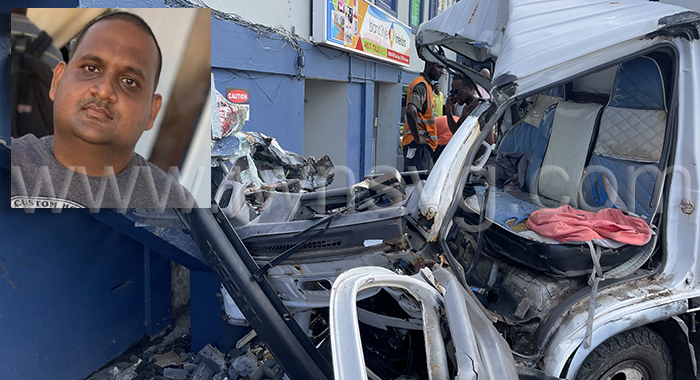 The mangled truck after the accident at Arnos Vale on Wednesday, Sept. 28, 2022. Inset: The deceased Suraj Bacchus.

St. Vincent and the Grenadines recorded its sixth road death this month when a truck crashed in Arnos Vale, on Wednesday.

The latest victim has been identified as Suraj Bacchus, of Peruvian Vale.

Bacchus was pronounced dead at the Milton Cato Memorial Hospital, in Kingstown, after the box truck, TM984, in which he was transporting sacks of sugar, careened downhill and crashed into Adams Building.

The two other occupants of the truck, both of whom were also reportedly seated in the cab, escaped with no observed injuries.

One of the passengers, a man, was at the scene attending to the vehicle and its cargo when iWitness News arrived at the scene sometime after.

The cab of the truck was mangled after it came to a stop after crashing into a flight of concrete steps leading to the upper floors of the building, which has two storeys in one section and three in another.

The truck struck and damaged RK114, which was parked in the area.

Bacchus’ death came 17 days after five men from Clare Valley died when a minibus in which they were travelling crashed in Sandy Bay.

Giovanni “Durh” Barker, 21; Khalil Robin aka “Keno”, 29; Kenroy “Pressure” Haywood, 29; Elvis “Logie” Harold, 30; and, Ishmael Bruce aka Darrel, 39 were on their way to a funeral in Owia when the accident occurred.

Several people were injured in the accident, including Gregory Allick, who remains in hospital, immobile and unable to speak.

The five men will be buried in Chauncey after a funeral service in Clare Valley on Oct. 16.