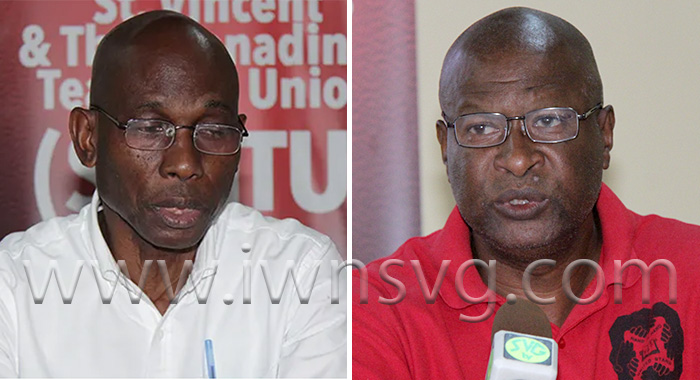 President of the Teachers’ Union Oswald Robinson has attempted to evade answering questions about whether the union’s position that teachers fired over the vaccine mandate should not reapply for employment was informed by legal advice.

Robinson said that the union had a meeting with unvaccinated teachers in August “and they took certain decisions”.

“They spoke about protests, prayer sessions. And out of that meeting, emerged the slogan ‘Don’t take the bait. Reinstate’,” he said when asked at a press conference in Kingstown, on Sept. 20.

“We went to an emergency general meeting and they approved those recommendations that came out of the meeting with the unvaccinated teachers.”

The union leader went on to explain that the meeting of the decision of the unvaccinated teachers was not binding on the union.

“A meeting of unvaccinated teachers is not a structure within the constitution of the union. So, whenever you have discussions like those, whatever emerges, they are treated as recommendations, which must go to an established structure in the organisation to get that approval. So, we went to the general meeting,” Robinson said.

“That slogan emerged ‘No bait; reinstate’. That was the teachers’ position — that they’re not going to reapply, they want to be reinstated. So, we went with that to the meeting and the meeting accepted, they endorsed, that. That is why the unit was able to have protest actions after…” Robinson said.

“So, the issue of reapplying, whereas a collective decision was taken, the individual teacher has the right, whether he or she wants to reapply or not, because when the Public Service Commission advertise that the teachers must reapply, the question of contract came up, because the government was saying you may be put on a contract, and then you may be permanent.”

The union leader noted that the offer of reemployment came with conditions, namely that unvaccinated teachers would have to wear a face mask.

Further, they would have to and be tested at a frequency determined by the chief medical officer.

He further noted that unvaccinated teachers who are rehired would have to observe physical distancing.

“So, I don’t know how a teacher could observe physical space and when you have to check the students work, you have to go close to them,” he said, adding that in staff rooms there isn’t three to six feet space between teachers.

“Some teachers in the classrooms, they don’t have that three to six feet away from the blackboard from the students,” he said, adding that the conditions of re-employment were “discriminatory and more or less punitive”.

He said that the union asked teachers who reapplied to inform the union in writing.

“Because when you have a document, going to the court saying how many teachers have been dismissed, it is important that you give adequate information for the court matters. You can’t give the court wrong information, wrong numbers,” Robinson said.

“So basically, that’s where we are now, what we know for sure is that there will be a hearing at the end of November, the first of December.”

However, when pressed about whether the decision taken at the meeting was informed by legal advice from the union’s counsel, Robinson said that the union had stated the purpose of the press conference.

“We were not prepared to discuss that matter. We were dealing with salary negotiation,” said Robinson.

However, when asked again, he said, “Well, counsel was at that meeting.”

The media pointed out that saying that the counsel was at the meeting is not the same as saying whether the decision was based on the counsel’s legal advice.

“The counsel was at the meeting and the teachers made their decision, based on advice that was given to them. If anything happens, changes after that, then that’s something else different,” Robinson said.

“Whenever we have meetings and it involves any legal issue, the counsel answers the question, and that’s why the counsel was invited to the meeting.”

Asked why he was so reticent about answering the question, Robinson said:

“Well, I answered the question, and I said, counsel was invited to the meeting to provide guidance to the teachers and they asked questions and they made their decision.”

Asked if the counsel advised not to reapply or suggested that it was the teacher’s decision, Robinson said:

“There was one teacher who specifically asked the question. That teacher had a few years in service and the answer was clear, well, even if you have a few years, you will lose your benefits, it has implications for your pension.”

When contacted on Wednesday, Jomo Thomas, whose firm is representing the union, maintained that he does not advise the union on labour relations.

“I have said before and I would maintain that I don’t advise the union on labour relations matters. I advise them on the law,” Thomas said and declined further comment.

The union is having a meeting of unvaccinated teachers today (Wednesday) at Bishop’s College in Kingstown at 4:30 p.m. The union’s counsel is expected to attend.