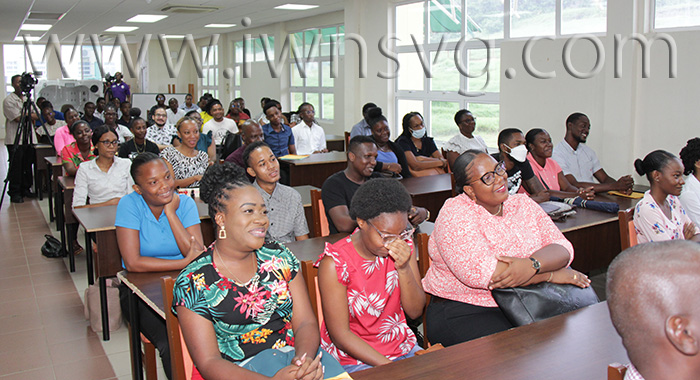 Some of the people recruited by Sandals this week.

A further 52 Vincentians have been selected to be trained by Sandals Resorts International at their resorts in Turks and Caicos Islands (TCI) and St. Lucia.

They were selected during a three-day job-fair that ended on Thursday, when Minister of Finance Camillo Gonsalves told the successful recruits that they will undergo their “Sandalisation” ahead of the opening of Sandals’ Beaches resort at Buccament Bay next year.

Winston Anderson, managing director at Sandals Resorts International, also addressed the successful candidates at the Saint Vincent and the Grenadines Community College School of Hospitality, in Diamond, on Thursday.

He told them that the team had seen in them “commitment, passion, pride and that sense of wanting to be the best”.

Anderson was speaking after Vincentian Shakeen Antoine, 26, of Campden Park, who was selected among the first batch of Vincentian and now works at Sandal Beaches resort in TCI, spoke highly of her experience.

“… pursue what you believe in. So, when you get there, achieve your goal, put your best foot forward. Don’t let no one, nothing stop you. Have a positive mind; go with confidence,” Antoine said.

She said that she was initially apprehensive about leaving St. Vincent to work overseas and applied on the penultimate day because her cousin continually encouraged her to do so.

Antoine said that she was so nervous and sweated so much on the day of the interview that she had to change her shirt. She spoke about how the training she received had transformed her into a confident person.

Meanwhile, Anderson told the recruits that he still remembers that Antoine was trembling during her interview.

“But what we saw was that commitment, that pride and that attitude to say that, ‘Guess what? If I get an opportunity, I’m going to make the best of it.’”

He said Sandals has employees from over 21 nationalities in TCI.

“And Shakeen did not say that to you, but I’m gonna spill the beans and tell you that today, she is one of our superstars. In fact, she’s one of our influences on the property. Within a year, Shakeen has developed to become truly, truly one of our stars …” Anderson said.

He told the candidates that they are joining “an amazing company” and have become a part of “an amazing family … We are a family. Everything we do. It’s about being a family.”

The Sandals executive told the candidates that they will have challenges and concerns along the way.

“But one thing I want to assure you all today is that we’re here for you. Do not be afraid, do not hesitate to reach out to any member of the team. One of the great things about Sandals and Beaches is that every one of us, no matter who we are, we may have a title, but we’re one family.”

He spoke of the challenge that the team had selecting 52 from the more than 100 applicants and interviewees.

Anderson said that the team was in discussion about hiring more people and some candidates might get calls in the coming days.

Meanwhile, Gonsalves retraced the history of Sandals’ arrival in St. Vincent and their acquisition of the former Buccament Bay Resort.

He said that when the volcano erupted last year, the company asked what they could do and he suggested that they can give hope by hiring Vincentians.

“The reason you are here today is because the people who went before you a few months ago, did St. Vincent and Grenadines proud,” Gonsalves told the successful applications.

“And the reason that Mr. Anderson and his team will come back in a few weeks’ time is only if you guys go up there and do St. Vincent and the Grenadines proud.”

He said that during a trip to TCI, he met with the Vincentians who are working at Beaches TCI and inquired about their work conditions, wages, housing and how they were being treated.

“And everybody said they were absolutely thrilled with the work and the way that they were being treated at Beaches, Turks and Caicos,” he said, adding that some of them said that they were not sure they wanted to return to St. Vincent to work when Beaches opens at Buccament Bay.

“I was heartened that you went out there — not you but your team before you — and you are happy, you are well taken care of, you’re well paid. You’re working hard. And you’re doing St Vincent and Grenadines proud. And that’s the important part,” he said.

He told the candidate that they are ambassadors of SVG and when they go to work with Sandals, tourists will hear their accents and inquire about their nationality.

He said they should use it as an opportunity to promote the country, and the Beaches being built here.

The minister said he has seen the plans for the Beaches resort being constructed at Buccament Bay.

“They’re telling me with no water in their mouth that it will be the best resort they have ever built in their history, the very best,” he said, adding, “I could tell you more but they have to talk about it themselves.”

Gonsalves told the candidates that they are beginning a journey in the Sandals family, saying he met a gentleman in upper management in Sandals, who began working with the company doing water sports.

“And now, he’s top management at Sandals, because every time he got promoted, he did well and they promoted him. That is what can happen to all of you.

“Be ambassadors for St. Vincent and the Grenadines. Do your very best. Seek out opportunities and you will succeed.”

Gonsalves reminded the Vincentians that even though they are overseas, they remain citizens of SVG.

“And remember, if you experience challenges in another country, St. Vincent and the Grenadines is here for you,” he said, adding that the government is one phone call away.

“And we have very good relations with the Sandals team, and we want all of you to succeed,” he said.