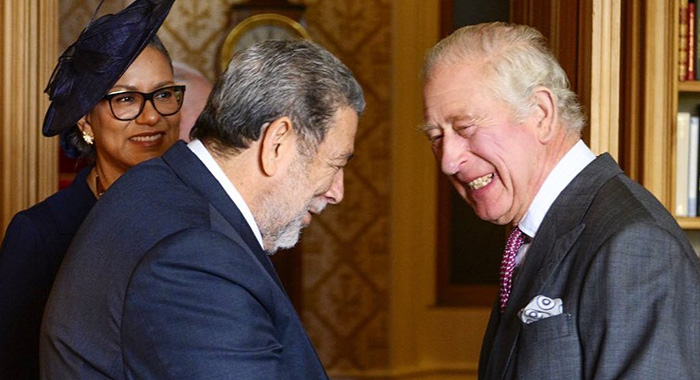 An opposition MP says he could not tell the difference between Prime Minister Ralph Gonsalves and King Charles III when they appeared in a photograph together in Scotland on the weekend.

“I saw a picture with Ralph, and — let me be circumspect — the king in England and I didn’t know who was who,” St. Clair Leacock said Monday on his party’s radio programme on Nice Radio.

“Ralph’s presence in England in the weekend to meet the King of England is the highest, most demonstrative level of political fraud ever seen or heard in my lifetime. It will be difficult to see more barefacedness than that,” Leacock said.

Gonsalves met with the king on Saturday, the last day of a visit to Scotland on official duties, where he also visited Vincentian students enrolled at the University of Wales Trinity Saint David.

The students are studying on scholarships that the king helped to secure when he was Prince of Wales.

The British press described the king’s invitation to Gonsalves to a meeting at Balmoral Place in Scotland as a charm offensive in light of Gonsalves’ opposition to the British monarch remaining the monarch of St. Vincent and the Grenadines.

In a 2009 referendum, Gonsalves’ government failed to convince Vincentians to amend the Constitution, to, among other things, replace the British monarch with a non-executive president.

And, earlier this year, he said he would ask the electorate to vote in a single-item referendum on becoming a republic, if the opposition would support the move.

Leacock said that in the 13 years since the referendum, Gonsalves had constantly spoken about getting rid of the queen as head of state.

Leacock said that in June, SVG “didn’t have the normal celebrations of the Queen’s Birthday.

“A few weeks ago, in the Parliament he said, look, if the NDP would only agree with him he would have another position to make us a [republic]… So, we replace the queen with him,” Leacock said, noting that the queen has since died.

“Every minute, he and his good friend ‘sir’ — the guy there in Barbados with the knighthood,” Leacock said, referring to professor Sir Hillary Beckles.

Gonsalves and Beckles are leading the call for Europe to pay reparation for native genocide and slavery to former colonies in the Caribbean.

“I don’t want he collect no reparation money for me. If there’s any money, I want my money personally… I don’t trust him,” Leacock said.

“But to find himself — you know, this is the same man, ‘Get rid of the Privy Council. Let’s go for the Caribbean Court of [Justice]’. Everything that he does is opposite to being in Balmoral … with the king. And all he gone is to put face to a name. ‘That is the man they does talk about in St. Vincent’,” Leacock said.

Asked if Gonsalves’ visit to Balmoral was “an ego trip”, Leacock said, “Well, somebody will give us a different name to ego.

“But they said in all of his missions abroad, don’t lose sight of the fact that he is raising money. He wouldn’t ah get no money in England, of course, but he’s always significantly raising money and the money is a factor in elections and in politics. So, NDP, Dr. [Godwin] Friday and company cannot take the eyes of the prize.”

Leacock was speaking as he dismissed speculation that the government was readying for general elections, less than two years after the last poll.

“The people have signalled to us that they are ready and that’s a good thing. That’s a good place for us to be,” he said, adding that the NDP, however, must decide which battles to fight.

“You can’t be all over the place. Right? Continue to build good, solid and sustainable — underline that word — coalitions; not no johnny-come-lately; not everything fly across the place you want to spray it. Let that one go, let go some, but pick your battles carefully.”

“Those things are constant, they’re in your face all the time. Those are different sets of issues.”

He said the party also has hardcore policy issues that it has to deal with, including climate change, although people are not interested in those types of conversations.

“… but they’re important,” Leacock said, adding, “What’s happening in the international world with respect to finance, inflation, the chances that America may go into a recession or the United Kingdom, …are important issues to keep our finger on the pulse with.”

He said that if the United States or the UK go into recession, the Vincentian GDP “will suffer because you could have less barrels, less remittances coming from abroad.

“But those are issues, when you talk about them people may not be as sexy and juicy. So, we have to know the different silos in which the whole gamut of political issues is and put your fingers on those which are of political and electioneering consequence,” Leacock said.