NDP Women urged to not depend on tokenism, favours 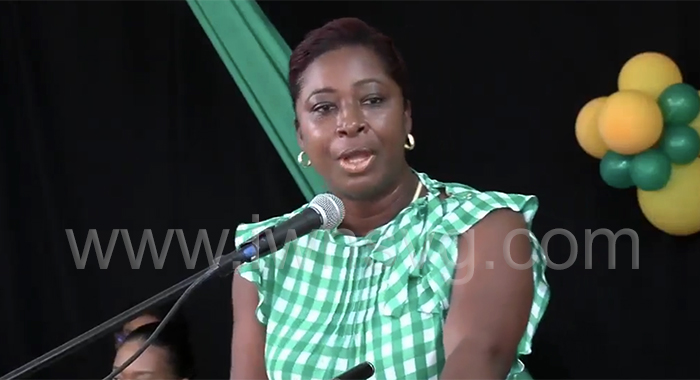 A female  Grenadian MP has urged members of the Women’s Arm of the opposition New Democratic Party (NDP) in St. Vincent and the Grenadines to find their purpose in politics.

Emmalin Pierre said that women’s involvement in politics is not just about numbers and ratio but about making a difference.

“You are agents of change and you have the power to contribute to the success of your party, your community and your country,” Pierre told the convention, which was held under the theme “NDP Women Consolidating the Party for Ultimate Victory”.

“As a matter of fact, I say to you, you have the power to change the political and social landscape of the society working with the men of your party. The work is critical and it must be done effectively and efficiently,” the three-term lawmaker said.

“Do not depend on tokenism; do not depend on favours. Get involved. Work hard. Work your way up. Don’t let anyone devalue your currency and the contribution that you can make to your country.

“Put people above self, put God first in everything that you do. And as the great Singer Bob Markey once said,  … every little thing is gonna be alright.”

Pierre, a member of the opposition New National Party, a sister party of the NDP, said it is a known fact that women have made significant progress in many areas such as education, science and technology and politics.

“However, the reality is that there’s still widespread gender inequalities as it relates to women, particularly in the area of politics.”

She noted that former former UN Women Executive Director Phumzile Mlambo-Ngcuka said: “No country prospers without the engagement of women, adding, “We need women’s representation that reflects all women and girls in all diversities and abilities, and across cultural, social, economic and political situations.”

Pierre further pointed out that Mlambo-Ngcuka also called for bold and decisive action across the world to bring women into the hearts and the decision-making spaces in large numbers and full partnership.

“In her own words, she said there is no doubt this can and should be done. It should be done now,” Pierre said, adding that she fully agrees with the statement.

She noted that UN statistics show that in 2021, only 26% of all national parliamentarians in the world are women.

Pierre said that women’s involvement in politics is not just about representation.

“It is about representation that will make a difference. And that is why I don’t subscribe necessarily to the view that there must be a 50% quota arrangement for men and women in government and politics.”

Pierre, however, said she believes that women are best placed to represent women throughout the world.

She said that despite an almost equal population of men and women, data shows that women are underrepresented at all levels of decision making worldwide and that achievement of gender parity in politics is far off.

Pierre urged NDP women not to subscribe to the playing down of the value of women and the value that women can bring to the table.

“Do not subscribe to this mantra that a woman’s place is limited to the home. We have a greater contribution to make, to the advancement of our society and to the creation of a better world for our girls, our boys or men.”

She challenged women who are already in  leadership to “lead with confidence and to inspire other women.

“When you get into leadership position, it must never be about statistical statements but to positively impact the lives of people, particularly the vulnerable woman through the creation of opportunities and by making policies and the passage of legislation so changes can advance the cause of women throughout this country and throughout the world.”

She said that many women who aspire to and dream of making a difference in the political arena, choose to stay in the shadows when they look at the verbal attacks and the character assassination that many other women face in politics.

Pierre, however, said it is unfortunate that often, the attack on women comes from other women.

“Hopefully one day, women across political lines would recognise that we are fighting the same cause.

“The career moms that were spoken about earlier, who wake up in the morning, take care of their husband and children, then will go to take care of the world to return to continue the cycle, deserve a place at the table.”

She said that “a well-recognised trade unionist in Grenada” has always pointed out to her that he is “perplexed by the fact that women in our cabinets were able to effectively perform their roles as wives, mothers, ministers of government, parliamentary representatives, and so much more, all at the same time”.

Pierre saluted that trade unionist, as a man, “for making this observation and for always providing support to women.

“Many men are supposed to be encouraging and supporting women to be the best that they can be and to reach their fullest potential in the interests of societal development.

She urged the convention to “be bold, be brave, be strong NDP women, because in every one of you lies purpose, lies potential, lies possibilities…”

Pierre said the issues affecting women in the Caribbean region and the world “are so critical that we must be big enough to partner even across political lines with our men and women.

“So addressing issues of violence against women, inequalities and other issues that we face, require strong partnership and alliances.”

She said the “tribalistic politics of hate and spite leaves everyone a victim; no one wins.

“So women, again, I say to you, rise up to your calling, rise up to play a role not just in politics, but in your communities, in your church, in your school, on the job, women were born to make a difference,” Pierre said.

She said she was not  advocating elimination of the important role that  men have to play.

“As a matter of fact, I wish that more of our men will take up that God-given leadership role into homes so that our families will be better families. So I’m very clear this morning of the role and the importance and the value of men, hence the reason that I’m appealing to men this morning to give greater appreciation and greater support to our women,” Pierre said.

“If you are real men, you will not feel that women will diminish your role, your authority and your importance; if anything we make you better. As I close, again, I challenge the women, find your purpose.”

5 replies on “NDP Women urged to not depend on tokenism, favours”