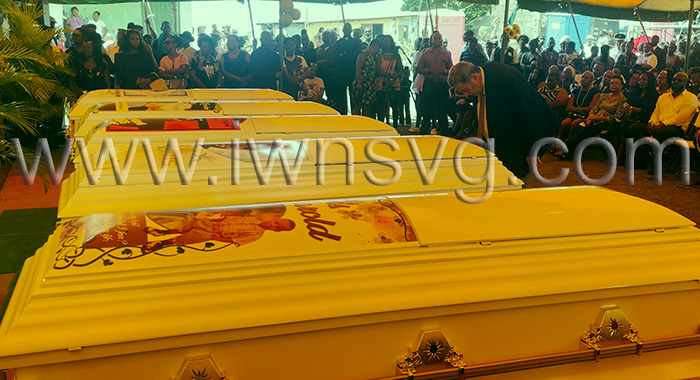 Prime Minister Ralph Gonsalves pays tribute to the Clare Valley Five at their funeral in Clare Vally on Sunday, Oct. 16, 2022.

The government of St. Vincent and the Grenadines will, from next year, grant two university scholarships in memory of the seven students killed in the bus crash at Rock Gutter on Jan. 12, 2015 and the five who died in a similar way in Sandy Bay on Sept. 11, 2022.

Prime Minister Ralph Gonsalves made the announcement on Sunday at the funeral for the Clare Valley five, who died in the Sandy Bay bus crash.

He said that the two three-year scholarships will be tenable at the University of the West Indies.

Giovanni Enrique “Durh” Barker, 21; Khalil Karl Travis Robin aka “Keno” and “Snackman”, 29; Kenroy Kevin “Pressure” Haywood, 29; Elvis Logie “Billy” Harold, 30; and, Ishmael Dorrel Bruce aka Darrel, 39, died when the minibus in which they were travelling to a funeral in Owia, crashed in Sandy Bay on Sept. 11.

The prime minister said that a monument will be erected in memory of the men.

He said that as recorded by historian Thucydidesin his book “History of the Peloponnesian War”, when the sons of Ancient Greece went forth, and came back dead, the people of Greece memorialised them in marble, in stone and in bronze.

“And we shall do so as suggested by Officer John here in Clare Valley. We shall memorialise them,” Gonsalves said, referring to Wilmet John, a police officer originally of Clare Valley, who, in his tribute, called for a monument in honour of the men.

“But more than any memorialising in marble, stone or bronze, as in ancient Greece, we memorialise them, we remember them always in our hearts and minds,” Gonsalves said.

The prime minister said that the young men were “cut down in the prime of their lives”. He said they were “young men of skill and discipline, a tribute to their families”, adding, “we have suffered a terrible loss, a national loss”.

He said this is why he gave instructions that the national flag be flown at half-mast until the funeral yesterday.

“This is a family occasion. It’s a community occasion. It is a national one,” he said and spoke of his visits and interactions with the relatives of the deceased.

He, however, pointed out that even as the nation pays tribute to the dead, “because we are all together in this, you have to be supportive of the living…

“Each of us has to provide support in however little way because it is a difficult time; it is a dark time, my love, madam chairperson. It’s a dark time. It’s difficult; it’s painful.”

He noted that Harold has left to mourn a young child, Elvanique, “who we have to make sure is well cared for…

“… we have to stay in touch and keep in touch with one another, to hold all of us — the words are important to convey messages but the love of our hearts and our minds must come forth for the living those who are depending on these young men,” Gonsalves further said, speaking generally about the affected families.

He said that the nation also has to look out for Robin’s son, Khalid – who was just 8 months old when his father died.

Gonsalves, however, warned against forgetting the survivors of the accident.

He said that the government is trying to ensure that the worst-affected survivor, Gregory Allick, is well cared for.

Allick, who was initially unresponsive for the first weeks after the accident, has been discharged from hospital, and has been assigned a health care worker as he is currently using a feeding tube.

“And his brother and I are in touch on an ongoing basis,” Gonsalves said.

He told mourners that he carries in his diary a piece of paper on which he has written the important notes about those affected by the tragedy.

“And those around me know that they have to be very much involved. And when the people of Clare Valley come, they know that they must get a very special welcome at the office of the Prime Minister,” Gonsalves said.

The men were buried at the Chauncey Cemetery, where Clare Valley traditionally buries its dead.