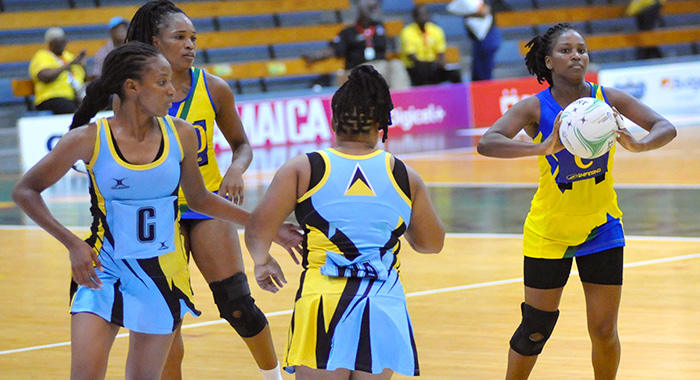 SVG’s captain Ruthann Williams about to make a pass.

St. Vincent and the Grenadines defeated Saint Lucia 49 – 36, on Tuesday, in Kingston, Jamaica, securing their second victory in three matches played to date in the Netball World Cup Qualifiers.

“We are on course to achieve what we came here for, which is a qualifying spot in the World Cup next year, and that is what we are setting out to do,” head coach Godfrey Harry said after the victory.

SVG’s next game is against Barbados on Wednesday night at 7:15 p.m. Eastern Caribbean time.

The Vincentian team said they are confident that they will emerge victorious against Barbados, placing themselves in an even stronger position to secure one of the two qualifying spots.

On Sunday, SVGdefeated the United States 51 – 24 in their opening game of the qualifiers.

The team however, lost 35 – 74 to Jamaica in a non-qualifying match later Sunday evening