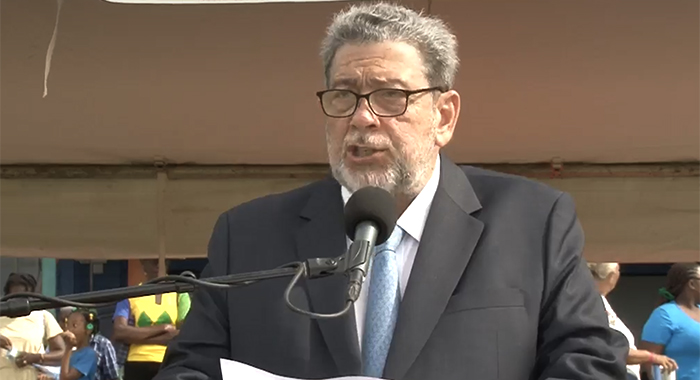 As of Monday, gasoline at the pumps will be reduced by EC$2.10 and diesel by EC$1 per gallon, Prime Minister Ralph Gonsalves announced in his address at the Independence Day military parade, on Thursday.

Gonsalves said that as the nation moves forward from the challenges since 2020, the government notes enhanced benefits and material improvements — immediate and prospective.

One of these is the establishment of the Wages Council to review minimum wages that will result in a minimum wage increase from 2023.

He said next year’s Budget will address a possible further extension of income support to 5,400 families across the country, which was slated to end this year.

The prime minister announced or reiterated 14 enhancements, supports and initiatives in different areas.

Gonsalves announced that as of Jan. 1, 2023, Youth Empowerment Services (YES)  interns will receive an EC$150 increase in their monthly stipend.

The increase will also be given to the mobilisers and coordinators of the YES programme, Gonsalves said, adding that this will cost the Treasury in excess of EC$1 million.

He also announced a moratorium, from Sept. 1 to Dec. 31 on the payment of fees by patients receiving dialysis at the Modern Medical and Diagnostic Centre (MMDC) in Georgetown.

“There are currently 47 patients on dialysis at the MMDC. This free dialysis treatment will cost revenue for the four month period $250,000 in consumables alone. Consideration is favourably being given to extending this moratorium into 2023,” the prime minister said.

This year, the number of national scholarships, national exhibitions, special awards and bursaries increased to 73, up for 62 last year.

These are in addition to the 940 tuition scholarships recently granted by the government.

“We are investing mightily in our young people, we urge them to soar with their wings unclipped,“ the prime minister said.

In the area of agriculture, the prime minister said the 40,000 sacks of urea, a gift from Venezuela that was announced earlier this year, will arrive very shortly for distribution to the farmers.

Further,  50,000 barrels of oil were delivered to the storage facility at Lowmans Bay under the PetroCaribe Agreement.

Gonsalves also announced that he will be meeting with the local PetroCaribe representatives as well as VINLEC to ensure that the delivery of the fuel will shortly result in a significant reduction in  electricity bill.

The prime minister stated that the government will be continuing with the housing repair and construction programme for 1,400 households, primarily those affected by volcanic eruptions last year.

A recent visit to Guyana by ministers and officials was connected to this housing programme.

“I know some of you who are not affected by the volcano directly have your housing problems. But bear with me, while I sort out those who were hampered devastatingly by the volcano,” Gonsalves said

He said that in 2023, the government will pursue a comprehensive pension reform plan, including a periodic review of the National Insurance Services, likely to lead to an increase in benefits for retirees.

The prime minister also announced that by this Christmas, an aggregate payment will be made of over EC$1 million to people who volunteered at various shelters during the 2021 volcanic eruptions.

“This practical way of saying ‘thank you’ is long overdue. A verification of the correspondence of the names with their identification cards is being finalised,” Gonsalves said.

The prime minister also said the government will be giving continued support in the form of subsidies and tax waivers for a range of commodities including brown sugar, flour, fertiliser and cement.

On Nov. 14, the duty-free concessions on Christmas barrels will start.

Gonsalves also said that on Wednesday, the Cabinet reconfirmed instructions to officials in the Ministry of Finance to finalise a special allowance to be paid to midwives from Jan. 1, 2023. Also, suitable arrangements for transportation for nurses are being finalised with urgency.

“They deserve it. Similarly, too, suitable arrangements  for transportation for nurses are being worked out with urgency,” Gonsalves said.

“And by the middle of November, I want to have a meeting with nurses and other persons in  the Ministry of Health, because I want to be sure that something more is done for the persons who are working in the health sector.”