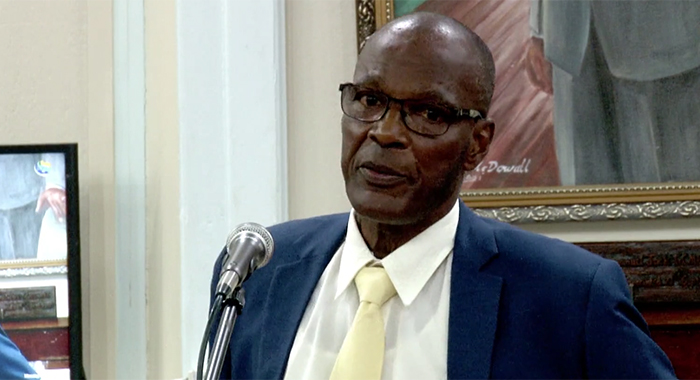 Opposition spokesperson on health issues, Daniel Cummings, has welcomed the Medical Laboratories Bill passed in parliament on Tuesday, but noted to lawmakers that the law is silent on the quality of staff employed at these laboratories.

“… there is nothing in this bill that controls the quality of staff that an institution may have to actually perform the test,” said Cummings, who spoke in support of the bill.

“You could have a laboratory that has a proprietor who is very competent and meets the requirements. But there isn’t any further requirement for those persons who are performing the tests to undergo the necessary level of training and continue training,” the West Kingstown MP noted.

He said he was making the point because “because one can easily understand, at the lower levels, somebody receiving a sample and simply not following critical procedural details can lead to contamination of samples resulting in false negative or positive results”.

Cummings said he thinks it is “important that we dig deeper to make sure that the laboratories have a system in place that ensures that at all stages, at every stage of the procedure, the competent staff has some overview.

“I say this with a little bit of trepidation because some people might interpret it in the wrong way. In the world we live in today, the efficient handling of samples and the way laboratories operate is crucial to the delivery of healthcare, false positive or false negative results can have severe implications for the patient.”

He said the law was being passed “in the context of a failed health system in our country where members of the public are finding it increasingly difficult to avail themselves of services in the public sector, for the want of resources, be it medication, be it supplies, whatever. “

Cummings said that the opposition has “absolutely no quarrel, in principle, with the regulation of private laboratories.

“It is a necessary step,” he said, adding, “Importantly, members of the public will have an opportunity to see if the private laboratory is in fact licensed or if that license has been revoked.”

The lawmaker, however, pointed out that under the law, the government’s laboratory is not subjected to the same scrutiny as private laboratories.

The training of the laboratory staff and the monitoring of laboratory staff, whether in the public or the private sector is one of the key components of an efficient laboratory system,” Cummings told Parliament.

He said he had not seen this borne out in the legislation.

“And again, it does not mean because it is not in the legislation, that laboratories aren’t doing it,” Cummings said.

“But, more importantly, for those laboratories that do not pay sufficient attention to this level of detail, I believe it’s imperative that that kind of monitoring be included by the council,” he said, referring to the Medical Laboratories Council, the establishment of which the law mandates.

Cummings said that while the opposition supports the establishment of such a council, a number of such councils already exist in the medical field and are responsible for the licensing and registration of medical practitioners and other medical facilities.

“And one wonders in the interests of efficiency, it would be better to incorporate this additional responsibility in an existing entity.”

He said that the “small piece of legislation” requires a lot of staff, at the level of the board, the administration of the council, the accounting staff, and the human resources staff.

The opposition lawmaker said the government’s wage bill, excluding transfers, accounts for significantly more than half of all revenues.

“And it requires us therefore to be more efficient in the use of our people,” he said, adding that he had suggested at the level of the select committee of Parliament that the Bureau of Standards or another established entity under the Ministry of Health perform this role.

Cummings said he was not suggesting that the Medical Laboratories Council was not important.

“… but I am concerned about having to establish another entity with all that goes with it, the establishment of the board, of payments, the requirements for staff etc., etc.”

He further noted that the council will be required to have its finances audited by the director of Audit.

He suggested that the council’s financial year not run from January to December, “and give the entity a better chance of having its accounts audited properly”.