CDC ‘the one to really answer’ questions about no Miss SVG live stream, Carlos says 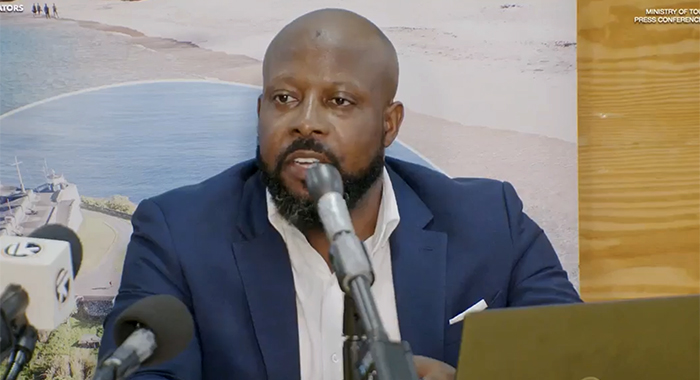 Minister of Tourism and Culture Carlos James speaking at a press conference in Kingstown on Monday, Oct. 31, 2022.

Minister of Tourism and Culture, Carlos James says the slow sale of tickets in the lead up to the Miss SVG 2022 pageant on Saturday “clearly was an indication that persons had an appetite for viewing at home”.

He further told a press conference in Kingstown, on Monday, that the Carnival Development Corporation (CDC) is best positioned to answer questions regarding why the show was not streamed.

“The CDC would be the one to really answer that based on their experience handling pay-per-views in the past and live streaming and that sort of thing,” James told the media.

“And they would have had the experiences even as recent as the Soca Monarch and the shows for Vincy Mas. So I think they are best placed to answer the question based on their technical — their capacity, production and the potential for revenue and loss of revenue within that context.”

Despite what the minister described and appetite for watching at home the first Miss SVG pageant since 2019 there was no live streaming of the “The Royal Return”,a s the pageant was dubbed.

Aviar Charles, chair of the CDC’s Beauty Shows Committee attended and spoke at Monday’s press conference but did not comment on why the show was not streamed live.

And, the Carnival Development Corporation or its Beauty Shows Committee are yet to offer an explanation.

On Saturday, before the start of the show at Arnos Vale Sports Complex, the public was treated to a 45-minute  broadcast on social media of “MISS SVG 2022 – RED CARPET”, showing patrons arriving for the pageant.

However, as the broadcast, which ended at 8:03 p.m. — three minutes after the advertised show time — began to wind down, a message appeared on the screen saying, “To view Miss SVG 2022 come to the Arnos Vale Playing Field”.

“Miss SVG 2022, you won’t want to miss out on this fantastic show. It’s not too late to get to the Arnos Vale Playing Field where the admission is still $75.00. These videos were taken a long time ago. Seats are now filling up fast”.

Some people took to social media to express their displeasure with the manner in which show organisers had “announced” that there would be no livestream of the event.

On Monday, James commended the CDC and its Beauty Shows Committee “for the organising of the return of Ms SVG to all of the viewers and persons were able to get a keen look at the pageant.

“I know there have been some discussions surrounding why it wasn’t live streamed. And of course, you have to look at the numbers and the production and costs that went into it,” he said.

The minister said “ticket sales actually moved within the last hour or two of the event”.

He said that while VIP tickets sold out early, “the regular tickets literally started moving a few hours before the show and then it clearly was an indication that persons had an appetite for viewing at home but when we realised that listen, we need to be out there supporting the women, they all decided that they were coming out to purchase tickets”.

James said he is “quite concerned about our diasporic community” and I have received calls from people asking how they could view the show.

“This weekend we will have the broadcasts of Miss SVG. A tighter production in terms of the packaging of the show, and the content and everything will be streamed live this weekend by the CDC and in collaboration with VC3.”

Responding to questions, the minister appeared to speculate about why the decision was taken to not livestream the show.

“… the production of the show is one of the considerations, I believe, that the Carnival Development Corporation took into consideration,” he said.

“… the information that came to me, when the members of the CDC went around to pick up the tickets, which were not moving as fast as they had anticipated, the vendors who are selling said, ‘No, no, no. You need to leave the tickets now because people are now literally coming for the tickets.’

“And in that last hour or two is when a lot of the  general tickets were sold,” he said and reiterated that the VIP tickets sold out long before the show.

James said he would be “looking forward to that production because even while at the show, I was you know basically keeping an eye on what the developments that were taking place backstage in the different segments and areas of the activity”.

The minister said he was quite certain that the Miss SVG contestants would also “want to see their effort because they also didn’t get the opportunity to really take in — you know, the backstage chaos, might have not had an appreciation of how the actual show went. So we’re looking forward with great anticipation this weekend to the streaming of Miss SVG to patrons in the diaspora and those who are here in St. Vincent who were unable to attend.

The 21-year-old prospect resident won a university scholarship,  cash prize of  $8,000, an HP Laptop sponsored by Courts, a penthouse suite stay for a persons for two nights, at Beachcombers Hotel with breakfast, lunch and dinner included, and a spa certificate sponsored by Bamboo Spa

1st Runner Up,  Shadyn McLean, Miss Davyn Ltd, 26, of Argyle, also won a  National Insurance Services-sponsored certificate for a University of the West Indies (UWI) course, a  cash prize of $5000, a weekend getaway for two plus dinner for two, sponsored by Grenadine House, and a spa certificate sponsored by Haus of Aesthetics