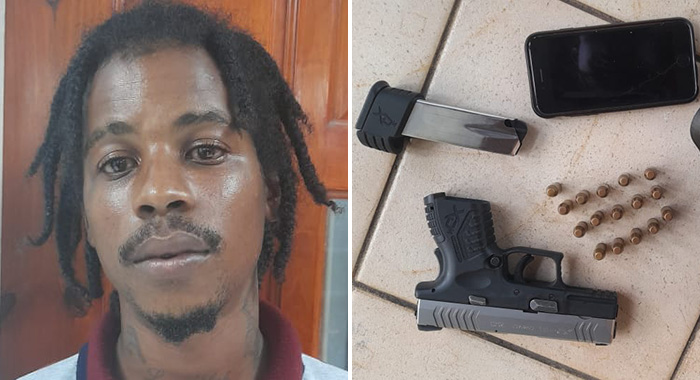 The accused, Tarique Sutton, left and the firearm and ammunition he allegedly had in his possession. (Police photos)

Tafique Sutton, a 27-year-old farmer, of Georgetown, was arrested, on Saturday, and charged with possession of one Glock 40 pistol and 16 rounds of .40 ammunition, without a license issued under the Firearms Act.

Police said that a party of officers attached to the Rapid Response Unit were on mobile patrol duty about the Georgetown District when they observed Sutton with a grey Gucci bag at a restaurant and bar in the area.

The officers became suspicious and requested a search, which led to the discovery of the firearm and the ammunition.

Sutton was cautioned and later charged with possession of an unlicensed firearm and ammunition and is scheduled to appear in court to answer to the charges.