Gonsalves confident ruling party will retain its seats in Dominica 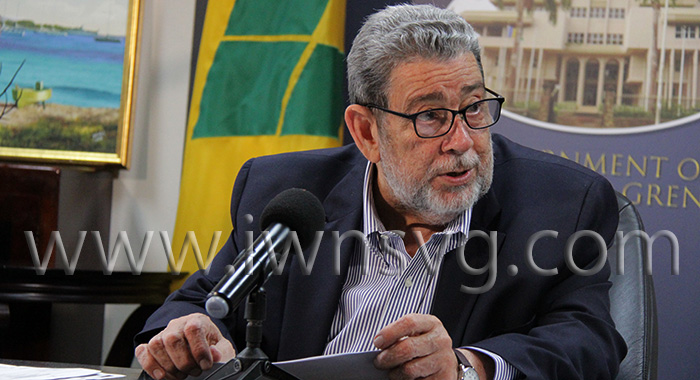 Prime Minister Ralph Gonsalves in on Oct. 4, 2022 photo in Kingstown.

Prime Minister Ralph Gonsalves says he believes that the Dominica Labour Party (DLP) will return to office after the Dec. 6 general elections with no fewer than the 18 seats that it held in the last Parliament.

Dominicans will elect a new government in snap elections on Dec. 6, which comes three years after the ruling Dominica Labour Party (DLP) won an 18-3 victory in the general election of 2019.

Gonsalves’ Unity Labour Party, which came to office in March 2001 and the DLP, which has been in office since 2000 are two of the longest serving parties currently in office in the Commonwealth Caribbean.

Asked last week, Gonsalves said he did not want to comment on the snap elections.

“I read what the Prime Minister of Dominica says and within the context of Dominica, … he’s in the best position to make that judgment,” Gonsalves said on NBC Radio.

He noted that Skerrit has said that he is seeking a fresh mandate because he wants to have some fresh infusions in this post-COVID period, where things have been very difficult.

“And he outlines all the difficulties, which was a very honest speech,” Gonsalves said, adding, “I read it carefully.

“He didn’t mince his words and he is going to the electorate saying, ‘Listen, I have some good people; some I have to change because I want to be able over the next five years, as a matter of urgency, to address some of these things more efficaciously,” Gonsalves said, noting that Skerrit had two more years in office before elections were constitutionally due.

“And the last time he went to the polls in 2019, you got 18 of the 21 seats with 59 point something percent of the vote, which is a fantastic performance,” Gonsalves said.

“But he’s in the best place to make the assessment. I’m quite confident that the Dominican people will go along with his judgment. I’m sure that they’ll go along with his judgment because he has had an impressive record of achievement and he has grown in stature as a leader and in very difficult circumstances he’s steering the ship. Hasn’t been easy.

“I don’t anticipate that he will get numbers less than what he got in 2019, but he clearly wants to retire early some who were elected in 2019 and he probably feels that this is the best time to do it in all the circumstances. Well, he feels, not probably.”

Gonsalves said he is impressed with Skerrit as a leader, noting that he came to office “when he was a relatively young man and, first, he had to find his feet and so forth”.

Skerrit, 50, became Prime Minister in 2004 — four years after his election to Parliament — following the sudden death of Prime Minister Pierre Charles in January 2004.

When he won a fourth consecutive term in office in 2019, he became the first Dominican leader to do so.

“…one of the things with Roosevelt, he has a good progressive framework in which he’s advancing things,” Gonsalves said.

“As you know, I’m not a fan of citizenship by investment and he knows that but with some of those resources and not even just those resources, the way in which he has managed the place, for a country with a lot of challenges and arising out of when his country was flattened a few years ago by a hurricane, 200% of GDP gone, gone in the wind.”

Gonsalves was speaking one day after the main opposition United Workers Party announced that it was boycotting the election, which came amidst ongoing electoral reform.

Since then, the opposition Dominica Freedom Party (DFP) also announced it would boycott the Dec. 6 snap general election even as the newly-formed Team Unity Dominica urged opposition parties to form a coalition to defeat the DLP.