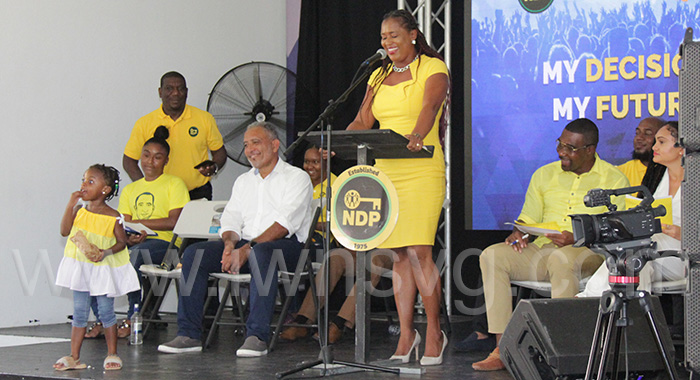 A toddler steals the moment as she wonders on steal during Senator JOhn’s featured address at the NDP’s Youth Convention on Sunday, Nov. 20, 2022.

The main opposition New Democratic Party (NDP) says it is “committed to building an SVG that positions our young people for prosperity and upward mobility”.

Shevern John, an NDP senator, told the party’s youth convention in Kingstown, on Sunday, that the party will “restore law and order.

“We will implement laws that will protect our young men and young women from abuse. We will provide employment and entrepreneurial opportunities for our youth. Our plans are well thought out. But, the ball is in your court,” John said, as she delivered the featured address.

“We are an NDP that will adopt technology and implement the regulatory framework to ensure that our entrepreneurs can implement new business concepts to compete globally in the tech space,” John said.

She said that Opposition and NDP Leader Godwin Friday is passionate about young people having a seat at the table “so they can participate actively in decision-making”.

She said the NDP doesn’t simply want young people “to dance to our party tune. No! We encourage rigorous discourse and contribution of the youth”.

The senator said this is why her party has said that under an NDP government, every board will have a youth representative.

“A youth who will have an equal say at the board level,” John said.

She said that young Vincentians have been “experiencing the harsh realities of today under the present administration.

“Many of you have done so very well in school yet you are still unemployed and frustrated. Many of you have bright ideas but can’t find incentives to assist you in their implementation.”

She told the young people not to sit back and fold their arms.

“Absolutely not! Let the change begin today. Let it start right here. Revive youth activism. Say enough is enough. Today, you shall say, ‘It is my future and so my decision is to stand up and be counted.’”

She told the Young Democrats that being a young person in this age means they have been blessed with many things.

John said that the current generation of youth are more technologically savvy than any other generation.

“You have been more educated than your parents and grandparents and you have more access to resources than those who have gone before you,” she said.

“With all these things going in your favour, you need to join the stream of those who have changed the nation through their activism, their boldness, and their unerring desire to see things get better.”

She said that an NDP government “will once again give our youth a voice and an opportunity to bring about change.

“Change is needed if this country is to become a safer, kinder, and more prosperous nation for all, and not just for those from a certain area of the nation, or those with a particular last name, or those who have attended certain schools — but for everyone.

“That is the only way in which we would turn things around and reposition this once proud, strong nation as a leader in the new world that is upon us,” John said.

“Young people, the future is before you. Shape it into a better one than it will be if things continue the way they are presently. Own it, do the things that need to be done for a better tomorrow. Make the right decisions now and the future will be a greater one for you and the future generations,” he said.

She went on to quote Moses as he addressed the nation of Israel before his departure, when he said in Deuteronomy 30:19:

“This day I call the heavens and the earth as witnesses against you that I have set before you life and death, blessings and curses. Now choose life, so that you and your children may live.”