‘Are teachers really better off than in 1975?’ preacher asks 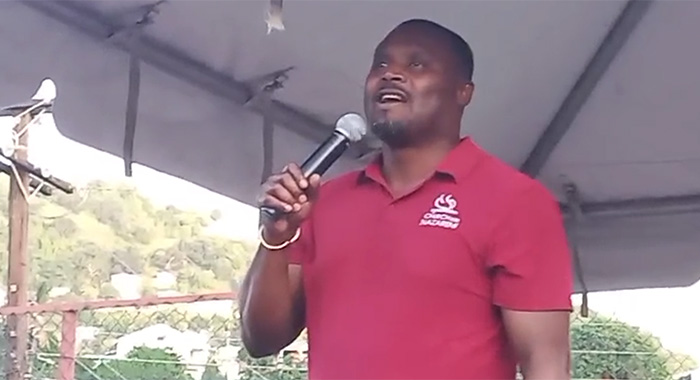 The Reverend Kelron Harry speaking at the St. Vincent and the Grenadines Teachers’ Union’s Solidarity March and Rally in Kingstown on Friday, Nov. 18, 2022.

A local preacher is urging teachers to consider whether the 2018 conclusion of late social commentator Kenneth John is still correct when he said it is not true that teachers are hardly better off than in 1975.

“Have we really gone or come a long way? Then if we have travelled far from that or developed from that, then we are in a decline now and we are heading back to such a state,” the Reverend Kelron Harry told the St. Vincent and the Grenadines Teachers’ Union’s Solidarity March and Rally in Kingstown, on Friday.

“And that is why we must stand up and speak up,” Harry said.

In 1975, the government teargassed and arrested teachers who were marching in Kingstown to highlight issues related to their profession.

Four years ago, John, a lawyer, writing in his weekly column in The Vincentian newspaper, said:

“Casually and cavalierly, it is often said that the teachers have been caught in a time warp with the conditions, problem and official attitudes of them hardly better than they were in 1975!

“Nothing can be further from the truth. Teachers now have a collective agreement hammered out between equals, whereas 22 ago, they could hardly get the government to sit down with them and negotiate.”

Harry said that he read John’s article again, and noted that the commentator had given three reasons why he thought that teachers have not been caught in a time warp.

The preachers said that teachers will have to decide whether things have changed or remain the same since 1975.

Harry noted that John said that teachers now have a collective bargaining agreement hammered out between equals, whereas in 1975, they could have hardly gotten a chance to sit down with the government and negotiate.

The preacher further noted that the commentator had said that in the past, usually for reasons of discipline, teachers were posted to the then hard areas such as the Southern Grenadines and “Carib Country” (North Windward) — “as it were to Siberia and Outer Mongolia”.

“I ask you, have things changed?” Harry said.

He further noted that John said that teachers enjoy “a security of tenure today and are no longer subject to dismissal at the will of the Crown, as was exercised by [then Prime Minister Milton] Cato, [then] Attorney-General Arthur Williams and their crew.”

“I ask you, have things changed? Harry told the rally.

The pastor was addressing the rally even as the Teachers’ Union, the Public Service Union and the Police Welfare Association prepare for the hearing — on Nov. 29 and Dec. 1 — of the lawsuit they have brought against the government following last year’s COVID-19 vaccinate mandate.

Last December, hundreds of public sector workers lost their job for failing to take the jab, as the government had ordered.

Harry has been critical of the mandate and the government’s decision to fire workers for failure to take the jab.

“I want you, teachers, to know today and fellow citizens, I salute you. I stand with you. I understand, I have seen what you have been going through,” said Harry, who is pastor of Arnos Vale Church of the Nazarene.

“And in spite of all of the difficulties, you have remained strong,” he said.

‘if you are a quality teacher, you have a mind of your own’

The preacher pointed out that in some areas, education is described as a change of behaviour.

“You cannot, therefore, just accept everything and remain silent and say, ‘This is what it is.’ Teachers are arguably the most important members of our society. They give children purpose, set them on their part to success and inspire them to drive and have a future that otherwise may not be attained.”

“They live their lives as educators. We must treat them with respect,” he said, adding that quality teachers empower.

“They continue to breathe life into our young and propel them to be successful and to do good.”

Harry said that quality teachers are guides — constantly providing guidance and instructions to the nation’s youth.

“Quality teachers sit and look into the eyes of a child who does not have enough money to even buy a school shoe, to even have lunch, and tell them they can become prime minister.”

He said that quality teachers affect not just the future but also the present.

“It seems as though we are in a time when we are to become regurgitators. I am only to repeat what you say to me, I am to look at the status quo and it should remain,” Harry said.

He said this is why he does not support “a draconian law, a wicked law that will say to you, if you think for yourself and make a decision for yourself I will take away your livelihood, I will get rid of you and I will eventually destroy you.

“It can never be right. I can never support such a thing. Quality teachers are those who are able to analyse a thing and make a wise decision,” Harry said.