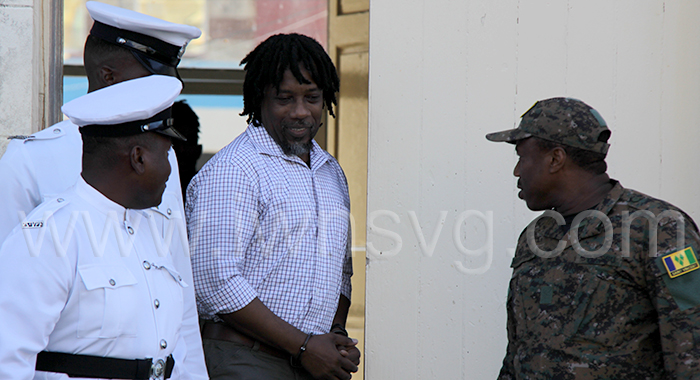 Junior Jarvis is escorted to prison on Monday, Nov. 28, 2022 after being found guilty of murder and seven other charges.

A man who in 2011 appeared in an undated video saying that had he not changed his life he would have ended up like his father who was executed for murder, was today (Monday) convicted of murder and seven other charges.

A jury of four men and eight women deliberated for three hours and five minutes before finding former journalist Junior Jarvis, 50, guilty of murder in connection with the Feb. 14, 2017 shooting death of banker Randy Lawrence, 39, at Arnos Vale.

Some 43 witnesses, including the defendant and two other defence witnesses, testified in the four-week trial before Justice Brian Cottle at High Court No. 1, in Kingstown.

The jury returned unanimous verdicts on charges that:

Jarvis has been remanded to prison until January 2023 for sentencing.

As officers escorted him back to the penitentiary that has been his home over the last five years, Jarvis smiled as his former colleagues photographed him.

Lawrence, an employee of Bank of St. Vincent and the Grenadines, died at the Milton Cato Memorial Hospital, where he was taken after being shot multiple times around 7 a.m. in Arnos Vale on the day dedicated to love in the Western world.

There was no dispute that Junior Jarvis shot Lawrence on Feb. 14, 2017 at Arnos Vale, resulting in his death. What was in contention was whether Jarvis, then 44, murdered the banker.

It was also not disputed that Jarvis entered Josette Smith’s apartment, at Arnos Vale, on that day and was armed with a gun at the time. He, however, denied that he did so as a trespasser.

Further, there is no dispute that he fired two shots in the apartment. The bullet holes are still there, five years later.

Jarvis, however, denied that the bullets were discharged in deliberate attempts to kill Smith and Pompey — Jarvis’ then girlfriend.

The prosecution argued that he had waited for Lawrence to return to the area of Chill Spot to collect his vehicle and shot and killed him hours after they had had an argument.

The prosecution presented two selfies that are time-stamped “6:20 a.m.” and said that these, as well as the evidence of Desmond Samuel, prove that Jarvis was in the area of Chill Sport around that time on Feb. 14, 2017.

However, Jarvis said that there was a network collapse, his phone time was reset, and, therefore, the time on the selfies is wrong. He further said that Samuel was lying.

Also not in dispute was that Jarvis left Smith’s apartment with Pompey and went to the Options Supermarket, in Arnos Vale, where police met and arrested him.

The prosecution’s case was that he used force and the threat of use of force to compel Pompey to go there. However, the defence argued that as Jarvis’ then girlfriend, Pompey went with him willingly.

Jarvis testified in the trial and told the court that he shot Lawrence while defending himself, having believed that Lawrence would have killed him and get away with it.

He further said the discharge of the two rounds in Smith’s  apartment was accidental and that he had no intention to kill either Smith or Pompey.

He denied abducting or assaulting Pompey causing her actual bodyily harm or that he used his gun to aid in the commission of any offences.

Jarvis was represented by counsel Kay Bacchus-Baptiste and Ronnia Durham-Balcobme, while Director of Public Prosecution Sejilla Mc Dowall, along with Crown Counsel Renee Simmons and Richie Maitland appeared for the Crown.

The verdict comes about a decade after Jarvis appeared in a video saying that had he not changed his life, he would have ended up like his father who was executed for murder in 1978.

Jarvis spoke about his father in an undated interview inside the compound of Her Majesty’s Prison, where he had gone to minister with a missionary who had ministered to his condemned father at the same prison before his execution on Jan. 26, 1978, when Jarvis was just 5 years old.

In the video, which was uploaded to YouTube in Jan. 23, 2011, American missionary, Don Overstreet, spoke about how Jarvis’ father, convicted murderer, James Jarvis, was brave in the face of his execution, having accepted Jesus Christ into his life.

Jarvis said he had always heard the story of Pastor Overstreet and how he led his father to Christ.

“And it should have been an example for me, but, instead, I followed the wrong direction and went down the wrong path for many of my years and I reached to the point where had I not made the decision to come to Christ, I would have followed in the same footsteps; my father’s last footsteps. But I am glad to say and, praise God, that I am following in his footsteps, but in a different way,” Jarvis said.

He further said that he had received Christ in his life and had contacted Overstreet.

“And, praise the lord, he is here and we can spend some time in fellowship and talk about what things used to be like and what it is now. I am following Pastor Overstreet’s footsteps — my other father — and going into the prisons now and ministering to the young men in there with the hope and prayers that they, too, will bring their lives to Jesus Christ and realise he is the only way for them and not so much their lawyers and friends and the vices that they are so accustomed to,” Jarvis said in the video.