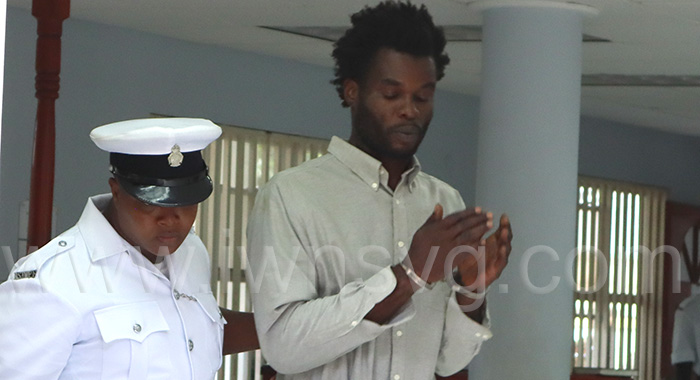 Nicklan “Trouble” King, the South Rivers man who, last week Tuesday, Nov. 22, escaped from the cell at the Georgetown Police Station has been fined.

On Monday, at the Georgetown Magistrate’s Court, Magistrate Bertie Pompey gave King one week to pay a fine of EC$400 for the offence.

King pleaded guilty to a charge that on Nov. 22, being in lawful custody at the Georgetown Police Station, he did escape from such custody.

“One officer, which I don’t know his name or [badge] number, was charging a gun to me head, taking advantage of me, interrogating me and telling me he go kill me,” King told the court.

“They (police officers) put me in a cell with a hole, the cell (metal bars) was rotten out already,” King said, telling the court that officers beat him at both the Colonarie and Georgetown police stations.

“I have some scars and wounds on the side from all the licks that they gave me,” King said, adding that his request for medical attention was denied.

Pompey then asked King if he sought medical attention after escaping custody.

“No. My Worship, me been afraid to go doctor because me suspect they would hold me because me name been done go viral,” King said. “The only thing I could have done was to go to a lawyer.”

“Those are not reasons for escaping police custody,” Pompey told the defendant whose conviction list was not before the court.

“If there were previous convictions, the decision would have been different,” Pompey told King.

The court heard that last Friday, lawyer Ronald Marks escorted King to the Criminal Investigation Department and handed him over to the police.

King was unrepresented when he appeared in court on Monday.

Prosecutor Corporal Delando Charles told the court that on Nov. 22, Corporal 670 Williams arrested the defendant on suspicion of theft.

At 11:20 a.m., Williams placed King in a cell with another prisoner, Calvin Williams.

At 2:44 p.m., Sergeant 644 Alexander spoke to both prisoners and told them the toilet in the cell was out of order.

At 3:10 p.m., PC 175 Quashie told Sergeant Alexander that one of the prisoners was not in the cell.

The sergeant then went to the cell and noticed that the prisoner was missing. He also noticed that a hole in the security vent, which is made of steel and wire, was opened.

Alexander questioned the other prisoner, who said he was sleeping and when he awoke the defendant was not there.