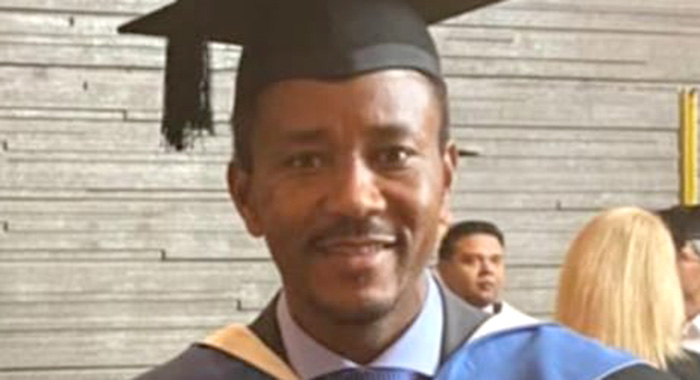 Vincentian Gordon Charles, a chief petty officer in the St. Vincent and the Grenadines Coast Guard Service, has graduated from the World Maritime University in Sweden with a Master’s of Science in maritime affairs, specialising in maritime education and training.

This International Maritime Organization (IMO) learning institute in Malmo, near Copenhagen, Denmark, is in the top categories worldwide for maritime education.

The university is a leader in maritime education and Charles’ achievement demonstrates his commitment and resilience through hard work and intellect.

Charles was awarded a scholarship by IMO Korea on recommendation from the SVG Maritime Administration to undertake this master’s programme.

He is among the first in St. Vincent to pursue studies in this field and said he is eager to advance the cause of the IMO by raising maritime education awareness in SVG

He is now among a circle or unique network of maritime professionals, and having completed a course at this level during the COVID-19 pandemic, is a major achievement, Charles told iWitness News.

“I left SVG on Sept. 19, 2021… The programme was 14 months in length. I gained extensive knowledge about maritime education and training on various levels across a broad spectrum,” Charles said.

“The programme included all facets of maritime, including law, administration, and education, and was designed for those who work in the maritime business, including stakeholders, educators, and seafarers. The foundation phase and the specialisation phase made up the study programme.”

A significant part of Charles’ studies was his academic paper (dissertation), “The Role of Maritime Education and Training (MET) at the Secondary Level in St. Vincent and the Grenadines.”

The data from the research findings showed that if MET is introduced at the secondary level in SVG, it can help to promote, develop, and sustain the maritime industry and raise awareness as to its significance among the Vincentian community and the region.

The result showed that secondary level MET in public schools in SVG is required for hyphening maritime capacity.

The results further show that MET is not accessible in SVG at the secondary level. However, if secondary-level MET is introduced, it can raise awareness of the sector in the Vincentian community.

Additionally, the research paper demonstrates the potential value of secondary-level MET if it is used at the secondary level, which can have great benefits for the nation and the industry.

It demonstrated that MET at the secondary level is necessary for SVG’s national growth and that the government should play a part in incorporating MET into the secondary public-school curriculum by working with the marine administration and the ministry of education.

The paper recommends the best course of action for establishing and expanding MET at the secondary level in SVG.

“I encourage everyone to read the academic paper online at the WMU website when it becomes available in January 2023. Persons wishing to access it before that date can do so at the National Public Library,” Charles said.

In 2016, Charles graduated with a Bachelor’s of Science in mechanical engineering and a diploma in business administration from Kun Shan University in Tainan, Taiwan.

His studies were financed by a scholarship from the Taiwan International Corporation Development Fund (ICDF).

Charles has worked as a Coast Guard officer for more than 25 years. He enlisted on Sept. 1, 1995 and worked for eight years before leaving for Turks and Caicos, where he worked as a police officer. He re-enlisted in the SVG Coast Guard Service on June 16, 2003.

Because of his current rank, Charles nowworks at the supervisory and management level and is a Coast Guard coxswain, in charge of taking the safe boat out to sea under his command.

“Now that my MSc is complete, my next academic journey will be my Ph.D. in maritime affairs. My intention is also to train other people and help promote awareness of the importance of the industry to the general public by utilising the knowledge, expertise, and skills gained at the university for the development of the youth in SVG and the country as a whole,” Charles told iWitness News.

“It is my effort not just to share this knowledge with the youth but to work along with Maritime Administration, the Ministry of Education, the Port Authority, the Fisheries Department, the Ministry of Agriculture, and other related organisations associated with maritime in offering my knowledge to help in maritime capacity building in SVG and the region.”

He hopes to lecture in maritime affairs if the opportunity arises.

“My time as a student at the World Maritime University was a life-changing experience that gave me the chance to learn, grow, and develop not only as a student, but also as a leader, manager, and educator in maritime matters,” Charles said.

“I would like to encourage our youth to work toward having a future career in maritime affairs, as the maritime industry is perhaps the world’s largest industry and it offers many different career opportunities for growth and development, not just at an individual level but at a national level,” Charles told iWitness News.

Charles said he is grateful to God, his two daughters, Commissioner of Police Colin John, the Coast Guard Service and the Maritime Administration and his “WMU family and friends” for their roles in his success.

“Also, I would like to thank everyone who took part in my interviews and survey and the service commission for approving my study leave; the world maritime university and the IMO Korea Fellowship for awarding me this scholarship,” he said.

One reply on “Vincentian specialises in maritime education and training”