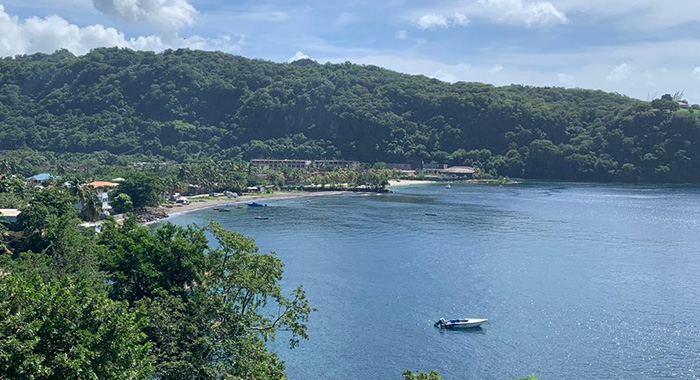 State violence is now the new norm in St. Vincent and the Grenadines as Government steps up the realisation of its development goals without any regard for those affected. It is evident in the brutish manner the police and Kingstown Board authorities are ravaging vendor stalls in Kingstown because they are not a “good look” for cruise ship visitors. In North Leeward, a massive mining operation is barrelling its way through a small mountain.

Since there is yet to be an environmental and social impact assessment in relation to the project, it is anybody’s guess the negative effects that operation will have on the health and well-being of neighbouring communities, the natural environment, wildlife, ecosystems and farms in the area.

And, soon we will hear the cries of the Buccament community once again, as they brace themselves for a new wave of assaults on their lives and livelihoods as Sandals Resorts International (SRI) prepares to rebuild the Buccament Bay Resort and establish their authority and branding over the entire Buccament Bay area. There, the lives and livelihoods of the local community is about to be upended early in the New Year, and in true form the Planning Board is signing off on a massive “re-development” project and transformative exercise without any insight as to the real environmental impacts and effects this development will have on the community.

Sandals Re-development Plan
For the second time in a four-week period, the Planning Board has issued two separate set of notices in the local newspapers (Nov. 11 & 18 and Dec. 2 & 9) for the final and seemingly smaller parts of the re-development of the Buccament Resort. These smaller projects are in relation to “coastal protection structures” to be installed in the form a groyne extending 60 feet on the south end of the bay, and a breakwater extending 275 feet on the resort side of the river.

While the first of these two applications to the Planning Board seeks permission for waterfront improvements extending a distance of 850 feet between the mouth of the Buccament River and the rocky headland to the south, it somehow reaches over to the village side where there are plans to install a groyne extending outward 110 feet at the north end or village side of the bay. This, according to the application, is to facilitate beach protection and beautification efforts, which would include 1,000 tonnes of white silica sand – a gift to the village because according to Finance Minister Camillo Gonsalves, they (the Government and Sandals) don’t want the people over on “that side of the river” to feel left out.  The real reason, voiced by a Sandals representative in a so-called consultation with the community on Nov. 24, is because “tourists don’t like black sand”. Parts of the overall waterfront improvements include a water sports pier 385 feet long and 15 feet wide, and an over water chapel 50 feet by 28 feet wide. The latter application asks for approval for ten overwater hotel rooms to be constructed on the southern end of the bay. Though the first application did refer to specific studies relative to wave action and seabed configurations conducted back in 2008, and acknowledged that a small amount of dredging will be necessary, notably absent was any form of EIA/social impact reports for public viewing.

A further look at a summary of previous applications by SRI to the Planning Board, the entire re-development of the Buccament Bay Resort encompasses an eyewatering amount of new development that would throw shade on the former Harlequin development structures. Among these are a Japanese restaurant, plaza restaurants, a central facility, an entertainment building, water sports facility, kids club, spa, warehouse building, staff canteen and administrative building, central plant and landscaping building, a garbage collection facility, waste water treatment plant structures, departure lounge/gym, resort shop, photo shop/stage, duty free shop, and a conference centre. when completed, the resort will have a capacity of over 300 hotel accommodations – 200 of these rooms will be housed in two tower blocks and the remainder are single and duplex villas inherited from Harlequin. The project manager was not kidding when he described the development project as “dense”, in the conversation government officials and Sandals representatives attempted to have with the Buccament community. (Consultation can be accessed here).

As ridiculous as it seemed at the time, the “consultation” was clearly staged to inform the Buccament community that the big boys have arrived and the community will no longer control the beach. The message delivered at the venue was crystal clear: “We will compensate you and relocate you”. As a consequence, the fishers will have to move “temporarily”, and informal settlements have to go, primarily Toya’s Chill where villagers enjoy hanging out at different times during the day. In fact, people come from all parts of SVG to relax and enjoy the beauty of the landscape, and the beach. Of course, part of the plan involves Coreas Adventure Tours, who will no longer be able to take Cruise Ship passengers to the beach on the resort side so they need exclusive use of the beach on the village side for that purpose. Toya and all the vendors who ply a trade in that area will now be relocated to a vending facility to be built by the Government on a vacant piece of land near the beach, and toilet facilities for tourists will be built there as well.

The role of Environmental and Social Impact Studies in large developments.
Environmental impact studies are very complex and multifaceted, and are conducted by independent agencies specialised in this area of work, that has the capacity to draw on the various professional expertise called for in a development project of this type and magnitude. A study of this nature would involve marine biologists, sociologists, environmental engineers, and other specialized environmental management professionals.

Their emphasis will be on the environmental impacts of the development –during the construction phase and from an operational perspective — on the surrounding environment, not limited to but including biological resources; fisheries activities; the social and cultural influences of intense tourism activity and how that can impact on the local community; the volume of sewerage waste, waste water, and solid waste likely to generated by the facility at maximum operational capacity, to ensure the handling of wastes are in-keeping with expected industry standards; the volume of water required at maximum occupancy levels, and the ability of the source/s to meet the Resort’s requirements without compromising services to other users. Since the resort and the village are located on a flood plain, the EIA will address the adequacy of the river defences on both sides of the river.

As part of the information gathering for the draft EIA report, extensive consultations would ordinarily be conducted within the immediate and extended communities, local professionals who interface with community at various levels, including CWSA, VINLEC, Solid Waste Management, and very importantly, Fisheries.

Potential positive and negative impacts of anticipated tourism activities, such as the use of jet skies (which would obviously affect marine life, especially marine mammals) and conflicts that can potentially arise between the various users of the general area.

The draft report would also include a review of potential negative impacts and would suggest mitigating measures to offset those identified. Upon completion of the various studies and consultations the Draft Report is circulated to facilitate corrections or omissions in the final report. Then the final report is handed over to the relevant authorities and professionals charged with overseeing the development project and is made available to the public via the Planning Division and other Government entities.

Both the Government and Sandals Resorts International have to be completely deaf and dumb to be asserting that a few so-called consultations and some studies to do with wave action conducted more than 10 years ago is sufficient to approve this massive development project. It is also disrespectful to the various professionals and civil servants who are charged with the responsibility to ensure the public interests. Sandals Resorts International likes to pride itself in respect on its corporate responsibility and attendant principles and practices, however their actions regarding the Buccament Resort re- development resembles that of corporate greed, white privilege, and disdain for black people. SRI is part and parcel of an attempt at avoiding and evading the relevant disclosures and critical components of their development project.

The company is privately owned and by all accounts, is worth more than US$4.5 billion. Therefore, it is unconscionable that an entity of such stature would want to sink so low that they are happy and willing to disrupt the lives and livelihoods of an entire community because they have the blessing of an extremely irresponsible government that lacks transparency, and is entirely divorced from the opinions and needs of the people they are elected to serve.

Like the rest of the Vincentian society, the Buccament community is made up of real people with aspirations to improve their quality of life and that of their children. If Sandals Resorts International genuinely wants to uplift the quality of life for the Buccament community, there are a few things they can offer to facilitate, such as improvement to river defences on the village side of the river; a supply of sand for the village community so the beach can restore itself naturally; an internet hub/library facility for the children; training in arts and crafts to improve the offerings available to tourists; training for small business entrepreneurs; an ongoing river clean-up initiative to enhance tri-tri harvesting, and to keep everyone healthy and safe; and instead of terrorizing the community with the proposed disruption of their lives in early January, sponsoring a Christmas party for the children at Toya’s Chill would be a really thoughtful gesture. They also need to also disclose in specific detail how they intend to deal with all the sewerage waste that a resort of that size will be generating.

In the final analysis, the disrespect and disregard for proper procedure within the Government machinery is simply not acceptable,anduntil a comprehensive EIA can be made available to the general public for scrutiny, all approvals for the various Applications since the start of this so called ‘re-development’ should be rescinded by the Planning Board, and all works put on hold. It is an insult to the general public to have the Planning Board put out a notice for an application for any development of this magnitude in absence of such an important and critical component prior to approvals. Further, no tourism operator or government should be seeking to enhance an area so closely associated with a local community unless it involves primary input from that community.