Camillo gets nod to present EC$1.4b budget on Jan. 9 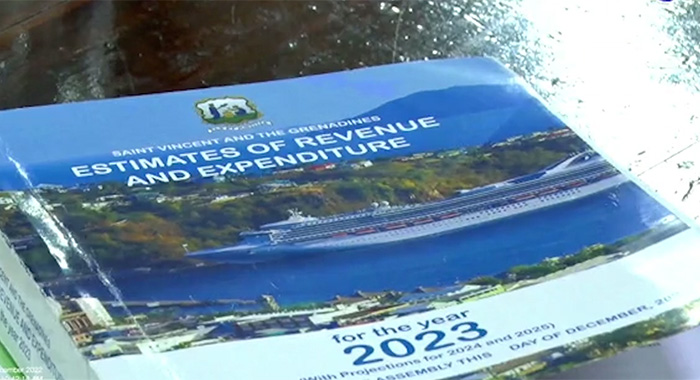 The estimates were approved even as the opposition complained, for yet another year, that the capital budget is bloated by Other Receipts, which at EC$225.9 million dollars, represents 30% of the capital budget.

With the vote in Parliament, the Minister of Finance Cmaillo Gonsalves can  present the Budget on Jan. 9, 2023.

In presenting the Estimates, Gonsalves said the budget for 2023 is broken into recurrent expenditure, inclusive of amortisation and sinking fund contributions, of EC$974,323,500 and capital expenditure of EC$471,563,113.

“Consequently, there is a current deficit projected in the Estimates of EC$10.3 million,” the finance minister told lawmakers.

“The projected improvement in revenue performance for 2023 is indicative of the uptick in real economic activity projected for the year 2023,” Gonsalves said.

He said revenue from tax sources is expected to contribute EC$648.3 million to the Consolidated Fund in 2023 while non-tax revenue is estimated to gross EC$113.2 million.

Tax revenue is expected to increase by 11.3%.

As regards the major tax types, taxes on income and profits are estimated to increase by EC$8.3 million, or 5.3%. Taxes on goods and services by EC$20 million or 10.4%; and taxes on international trade and transactions by 27% or EC$45.7 million.

Non-tax revenue is expected to come mainly from sales of goods and services, which is projected to generate EC$95.9 million — EC$20.2 million more than the amount collected in 2022.

Revenue from non-tax sources is also expected to come from inflows from other miscellaneous sources in the amount of about EC$12 million, Gonsalves said.

The total estimated recurrent expenditure inclusive of the amortisation and sinking fund contributions is EC$974.3 million — 4.6% or EC$42.5 million above the amount budgeted in 2022.

In the 2023 Budget, current expenditure is increased by 6.1%; amortisation is down by 1.2% and sinking fund contributions remain flat.

Gonsalves said compensation of employees increases by EC$19.8 million, or 5.6% and other transfers, including social assistance, training, grants and contributions to local regional international organisations is expected to realise an increase of EC$13 million or 9.6%.

Transfer payments to local regional and international organisations and individuals, called Other Transfers — are estimated in 2023 at EC$147.3 million — an increase of 9.6% when compared with the approved 2022 budget.

It also covers payment of public assistance to the vulnerable, scholarships, and other financial support for tertiary education and grants and contributions to local, regional and international organisations.

“The capital budget, which reflects the government’s public sector investment programme, is an important developmental tool, which it uses to translate vision and strategy into tangible project activities,” Gonsalves said.

He told Parliament that the capital programme was conceptualised in such a way as to facilitate growth over the medium term, and to defend against the impacts of climate change and natural disasters.

“To this end, the 2023 budget and the two forward years will see increased attention being paid to the important sectors of tourism, construction and agriculture.”

He said that as such, the capital budget for 2023 is concentrated in four ministries, which together account for 82% or EC$386.5 million of the total capital estimates.

The finance minister said that while a significant amount of the money in the tourism capital budget 2023 is within the Unleashing the Blue Economy of the Caribbean (UBEC) programme, the expenditure is largely agricultural.

He said that as regards functional classification heads 79.8% or EC$376.3 million of the capital budget is accounted for by four of the nine functional heads.

These are: Economic Affairs, which receives 50% of the capital budget for an investment programme, which is estimated at EC$235.9 million and intended to provide the basis to stimulate growth in the main productive sectors of the economy.

Environmental Protection has been provided with EC$69.9 million or 14.8% of the 2023 capital budget aimed at strengthening the country’s resilience to natural disasters.

Health has been provided EC$36.7 million or 7.8% of the capital budget to further enhance the quality of care and sustainable environmental services and social protection receives EC$33.7 million or 7.2% share of the budget to provide assistance to vulnerable individuals and families.

Gonsalves said that in 2023, a total of EC$100.2 million will be raised from domestic sources to finance the capital budget.

Revenue from the sale of government assets, namely Crown lands is budgeted to yield EC$1 million, while local loans of EC$99.2 million will also be raised.

He said that the main multilateral donors in 2023 are as follows the European Union, which will provide EC$5.7 million; the UK CIF – UK Caribbean Infrastructure fund — EC$28 million, which is largely to the port project; the Caribbean Development Bank — EC$7.2 million; and, the Global Environmental Facility will contribute EC$1.3 million.

“The government of St. Vincent and the Grenadines will also receive grants totalling EC$23.6 million from a number of friendly governments,” Gonsalves said.

“In respect of external loans, a total of EC$289.7 million is expected to be raised in 2023 — EC$234.2 million will come from multilateral creditors, and EC$55.5 million will be raised from bilateral sources,” Gonsalves said.