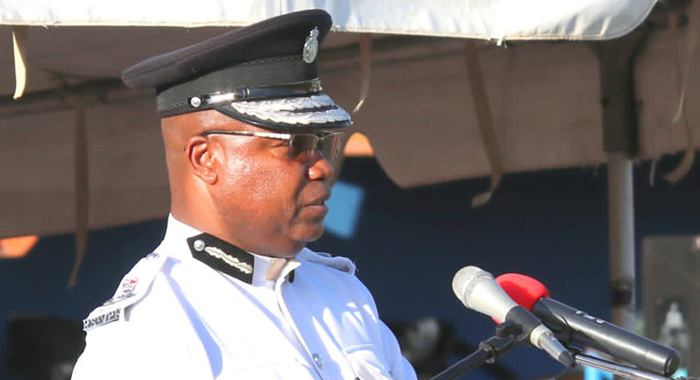 As the Commissioner of the Royal St. Vincent and the Grenadines Police Force, it is incumbent that I speak directly and publicly to my members. We are in no way ignoring the members of the public. Thanks for your invaluable contribution but permit me to primarily speak to the police officers. The year 2022 went by very quickly. There were several demanding duties that caused us not to meet as frequently as we should as a collective body. Therefore, a Christmas message to you is my attempt to compensate. “Charity begins at home”.

Firstly, I would like to express my gratitude to the loyal, dedicated, committed hardworking, and professional police officers; you are in the majority. You have contributed in a variety of ways to the many successes we have achieved during the period 2021-2022 and prior. We have seen a general decrease in reported crimes. In addition, our summer programmes for the youth of St. Vincent and the Grenadines have been quite successful. These include, but are not limited to, the Police Band Summer Programme, the Coast Guard Summer Programme, the Police Youth Club Summer Camp, the Anti-Trafficking in Persons Unit Outreach, and the football competition.

We have been able to get 35 firearms and 407 rounds of ammunition off the streets. This resulted in the arrest of 15 persons for firear- related offenses.

As police officers, we are called upon to perform every duty imaginable and unimaginable. And, when called upon, we stood up, showed up, and represented well in most cases. Through our efforts, we have ensured that Vincy Mas, the Easterval activities, the Independence activities, and the daily entertainment activities are conducted generally incident-free. For this and other reasons, I salute you, my men and women.

There are several areas in which we have fallen short. There are too many instances of reports of unprofessional conduct by police officers. These range from the manner in which some police officers approach civilians to alleged unlawful physical assaults. There have also been complaints of late and sometimes no responses by police officers to reports from the public.

Additionally, the manner in which some police officers treat government property, inclusive of transports, building fixtures and fittings, and uniforms, needs to be improved in a lot of areas. We can do better; let us do better.

At this time, I wish to congratulate the police officers who have taken their time, effort, and resources and have successfully completed courses of higher learning. During the year under review, nine police officers graduated from different universities with varying degrees. I am pleased to identify them.

• Cpl. 38 Devon Bute graduated with a Bachelor of Laws Degree (LLB) from the University of the West Indies, Cave Hill Campus. He is attached to the Public Relations and Complaints Department.

• Chief Petty Officer Gordon Charles graduated from the World Maritime University in Sweden with a Master of Science Degree in maritime affairs. He is attached to the SVG Coast Guard Service.

• Cpl. 808 Verna John graduated from the University of the West Indies Open Campus (UWIOC), St. Vincent and the Grenadines with a Bachelor of Science Degree in social work and a Minor in youth development. She is attached to the Sexual Offences Unit.

• PC 270 Jovarnie Browne graduated from the University of the West Indies Open Campus (UWIOC) with a Bachelor’s Degree in accounting. He is attached to the Financial Investigations Unit.

• Sgt. 470 Tittle obtained his Legal Education Certificate from the Hugh Hugh Wooding Law School and was later admitted to the Bar of SVG and the OECS. He is attached to the DPP’s Office.

• Sgt. 346 Dwight Lewis from the International Maritime Law Institute in Malta with a Master’s Degree in international maritime law, with distinction.

• PC 993 Tanisha Samuel graduated from the UWI Open Campus (UWIOC) with a Bachelor’s Degree in social work and a Minor in youth development work with First Class Honours. She is attached to CID.

Congratulations to all of you guys. You have made yourselves, your organisation and your country very proud.

God bless you, your family, and the people of St. Vincent and the Grenadines during this Christmas season and beyond.