Sharleen Greaves’ mother ‘even tried committing suicide’ after her murder 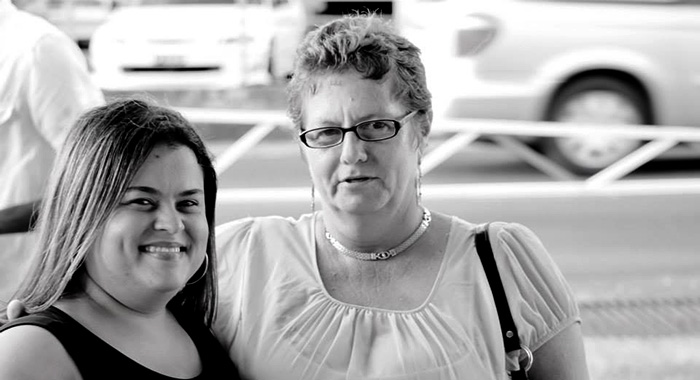 Murder victim Sharlene Greaves, left and her mother, Inether Bailey-Holder at the opening of Greaves’ Bijou Real Estate office in Arnos Vale in April 2015. Greaves was found murdered in her office on Nov. 13, 2015.

Inether Bailey-Holder, the mother of murder victim Sharleen Greaves, says she is happy that the trial is over and her killer jailed.

On Friday, Veron Primus, 35, of Vermont, was sentenced to 34 years in prison for the November 2015 murder of the 33-year-old real estate agent.

Bailey-Holder attended every court hearing in the trial, including the preliminary inquiry, where she waited outside the Serious Offences Court, not allowed to hear the testimony of other witnesses.

And then, during the trial at the High Court, she sat inside every day after she had given her evidence.

She told iWitness News on Friday that she was happy with the sentence handed down on her daughter’s killer.

In his sentencing remarks, Justice Brian Cottle, citing the social inquiry report, spoke of the impact of the killing on Bailey-Holder.

The judge said the report brought home the point that murder causes the death of the victim but also has immense consequences on those left to mourn.

“In her golden years, this mother is bereft of the financial and emotional support her daughter used to provide.”

He said the psychological effect of the sudden loss of a child in horrific circumstances left Greaves’ mother struggling and in need of counselling, which she cannot now afford to pay to access.

The judge said that, sadly, the court could “only offer a measure of closure to this tragic chapter” of Greaves’ mother’s life.

“Well, yeah, I have a lot of problems with all of those and some days, I don’t want any counseling, I just still try and counsel myself because the money is not there, the work is not there. She (Greaves) used to provide work for me. That is not there. So, more than one time and all I even tried committing suicide because I just could not handle the pressure.”

She told iWitness News that she is “not really” better now.

“It still does have those feelings and still have those thoughts about doing it. But I have to live for the rest of the children that I have, because I have three more and six grandchildren,” she told iWitness News.

She spoke while flanked by Assistant Director of Public Prosecution, Karim Nelson and Crown Counsel Kaylia Toney, who prosecuted Primus.

Bailey-Holder said she felt that the persecutors were on her side and this gave her courage and encouragement.

“I’m so thankful that Ms Garraway came with me every day,” she further said, referring to Sharon Garraway, a media worker.

“She was at the PI case every day and so she was here at the High Court every day. All the witnesses and everybody I just thank them,” Bailey-Holder told iWitness News.

“Thepolice officers, they did a good job and everything,” she said.

Greaves’ body was discovered in her office at Arnos Vale on Nov. 13, 2015. An autopsy found that she had been stabbed seven times.

Primus was arrested in April 2016 as police investigated a report that he had allegedly abducted a woman and held her against her will in Vermont for four months.

Then, one of Primus’ adult female cousins, with whom he had had a consensual sexual relationship, came forward and told police that he had confessed to her that he had killed Greaves.

Primus is also wanted in the United States, where he has been indicted in connection with the 2006 murder of 16-year-old Chanel Petro-Nixon.