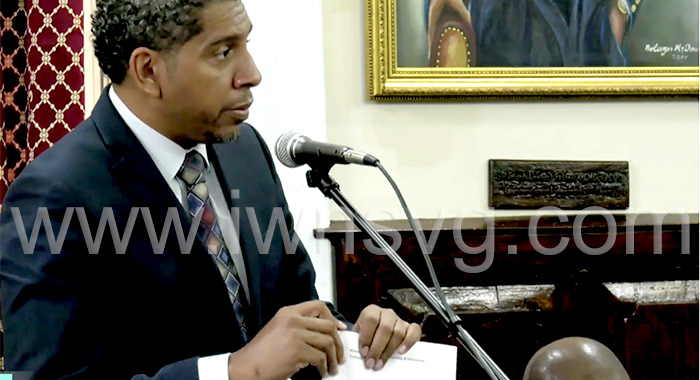 Minister of Finance, Camillo Gonsalves presents the Estimates to Parliament on Dec. 13, 2022.

The government has budgeted EC$75.4 million for the payment of pensions to retired civil servants and government counterpart contribution to the National Insurance Services (NIS) for civil servants currently employed.

This amount is comprised of pensions of EC$60.3 million, and NIS contributions of EC$15.1 million, Minister of Finance Camillo Gonsalves said as he presented, this month, Estimates of Revenue and Expenditure for 2013, amounting to EC$1.44 billion.

“Pension continues to be one of the more significant items in the recurrent expenditure in 2023,” the finance minister told lawmakers, who approved the fiscal package, paving the way for the Budget Address on Jan. 9.

“The burden obviously increases and the future burden on government pension plan will be substantial as the government is the largest employer in the country, and pension promises in the public sector are relatively generous, and future payments have to be made directly from government’s revenue — pay as you go,” Gonsalves said.

He said this makes the current public sector system unsustainable in the medium to long term, as it is non-contributory.

“Pension reform conversations have begun in earnest,” he said, noting that the issue was raised in previous budget addresses.

“And we were derailed over the last two years by challenges that we faced on the ground of both the pandemic and the volcanic eruptions and it was not, we believed, an opportune time to have those discussions as we were dealing with other challenges at the time,” Gonsalves said.

He, however, told Parliament that as promised in Budget 2022, the pension discussions would begin in this year, and head of the NIS Stewart Haynes has been meeting with labour unions individually and collectively and has been hosting a number of radio programmes and press conferences.

“And those discussions will intensify as we head towards a consensus in 2023 that will ensure both the sustainability of the pension system and the wherewithal of our retired civil servants.”

He said that in an era where workers in the private sector have seen their pension provisions decrease, pensions in the SVG public sector “continue to look generous.

“The director of the NIS has also in his many presentations discuss the generosity and indeed the unsustainability of the public pension system in St. Vincent and the Grenadines without reform, and this is clear indication that we must act now,” Gonsalves said.

“Consequently, in budget year 2023, pension reform will be high on the government’s agenda. And we are firmly committed to arriving at decisions that will ensure the long-term sustainability of our pension system for our growing number of retired civil servants who are also living longer than they have in the past.”

“There are two main reasons for this, the first being the recently negotiated public sector salary enhancement package, which included the following elements: a 2.5% salary increase in 2023, a 2000 increase in the personal income tax standard deduction and a reduction in the top marginal rate of income tax,” Gonsalves said.

The second reason relates to increases in increments, and the additional allowances that go with a number of the new positions.