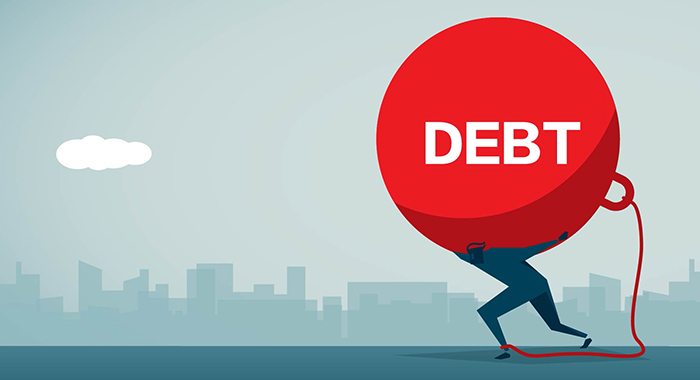 The national debt of St. Vincent and the Grenadines is almost the same size of the economy, up from 59% when the ruling Unity Labour Party came to office.

“That was below the prudential guideline — 60%,” Opposition Leader, Godwin Friday noted in the Estimates Debate in Parliament.

He noted that 37 cents of every dollar earned in current revenue now goes to service the national debt.

Friday pointed out that by 2015, four years after the ULP came to office, the national debt had gone up to 79% of gross domestic product (GDP) and last year it was 98%.

“It’s a little lower this year,” he said, adding, “But still last year was about the size of the economy.”

He noted that another component is how the public debt is serviced.

“The debt service as a percentage of the current revenue, because it’s tax revenue is what you use to pay the debt. Nobody gonna lend you money to go and pay debts. Well, the CDB (Caribbean Development Bank) maybe,” Friday said.

“… the government has to come up with … this year EC$282.8 million to pay the debt, which accounts for about 37 cents out of every dollar that you earn in current revenue.

“That is a heavy burden. It’s no wonder that the IMF characterised the debt situation as high risk of overall debt distress. It’s acknowledged in the budget that is a high risk of distress,” Friday said.

“But they say it’s sustainable. And I noticed that the government has now taken on board the cautions that Mr. Eustace had made so many times in this honourable house as to how you manage government finances, so that you make it sustainable going forward,” Friday said, referring to former leader of the Opposition, Arnhim Eustace, who retired from politics in 2020.

“And this is not rocket science and it’s not something that’s foreign or alien to us here in St. Vincent. This was done for 17 years under the NDP (New Democratic Party) government. you had a surplus generated over 5% per annum, which was used to go towards counterpart funding for various projects.

He said that under the NDP, there was an average annual economic growth of 4.2%.

“That’s not magic, that is prudent, wise sensible government and at the same time, poverty was decreasing in the country, overall people’s lives are improving.”

However, in responding to the Estimates Debate, Minister of Finance Camillo Gonsalves, accused the opposition leader of “sleight of hand” in quotation the IMF as saying SVG is in danger of debt distress.

“The next clause in that statement is ‘should future shocks arise’,” Gonsalves said. “So, yes, there is a danger of debt distress if more bad things happen.”

He said the same IMF report said the recent surge in debt resulted from multiple shocks.

“Not bad behaviours by the government, not profligacy, not mismanagement of the country’s finances but multiple shocks. And it told us what the shocks were…” Gonsalves commented.

The debt service requirements for 2023 are made up of interest payments of EC$80.3 million, amortization of EC$180.6 million and sinking fund contributions of EC$22 million.

The main changes within the domestic debt portfolio over the period are the balance outstanding on overdrafts owed by the public sector increased by EC$17.6 million, Gonsalves said.

He said the local loans portfolio fell by 9.2% or EC$10.6 million as a result of amortisation, on a number of loans during that period.

Total government bonds and notes issued outstanding over the period increased by EC$51.8 million, or 19.9%.

The main drivers for the increase in debt in external indebtedness by the government under the debt to CDB are the port Modernisation Project of EC$69.4 million; safety nets for vulnerable populations affected by COVID — EC$16.1 million; the school improvement project phase one — EC$11.9 million dollars; the NDM disaster risk reduction and climate change adaptation project — EC$3.7 million; and, the technical and vocational education and training development program of EC$7.3 million.

From Taiwan, there was the Modern High Court Project EC$6.8 million, and the Hotel Development Project of EC$10.8 million.

And then there is the CARICOM Development Fund, which provided EC$3.4 million to the development of the Holiday Inn Express at Diamond.

“Honourable Members would notice therefore that the increase in external debt is all from highly concessionary lenders,” Gonsalves said, adding that net repayments were recorded on a number of external loans during the period.