In Budget Debate, opposition makes yet another plea for reinstatement of workers 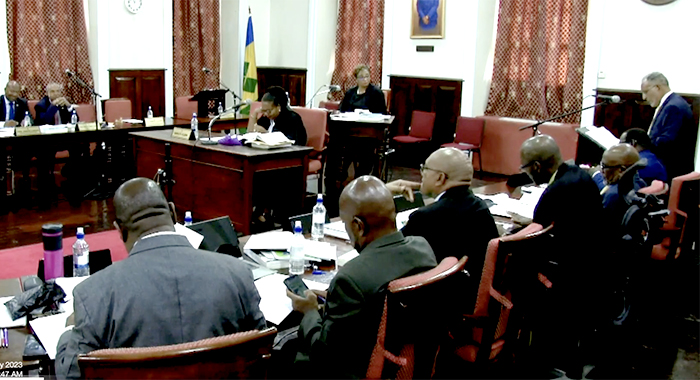 Opposition Leader Godwin Friday has used the ongoing 2023 Budget Debate to make yet another call for the reinstatement of workers who were dismissed under the government’s COVID-19 vaccine mandate.

Hundreds of workers remain off the job, having failed to comply with a law passed by Cabinet, ordering them to be vaccinated by December 2021.

The public sector unions have taken the matter to court and  at the end of the trial in early December, High Court judge Justice Esco Henry said she would hand down her ruling this year.

Leading off debate on the EC$1.4 billion budget for 2023, Friday noted that Minister of Finance, Camillo Gonsalves, in his Budget Address, spoke about St. Vincent and the Grenadines (SVG) being past the worst of the COVID-19.

“Let us take the opportunity provided by this relative respite to thank each and every healthcare professional, every worker at the clinics, hospital, in the isolation centre for the awe-inspiring bravery and heroism through the duration of the public health emergency,” the finance minister said.

“When fear and fatality were rising and understanding was in short supply, our nurses and doctors stood faithfully to an oath that many of us would not have the courage or have the courage to honour.”

Gonsalves said that his government kept the country open, resisting “the draconian and economically crippling Chinese-style restrictions advocated by the opposition”.

“When did the opposition ever advocate any Chinese style restrictions? But they like to put things in a way that, you know, press certain buttons.”

He pointed out that the finance minister said that his government, however, ensured near 100% vaccination among frontline workers.

“People had to choose between their body and their bread and they made that difficult choice,” the opposition leader told Parliament, adding, “yet it was this government who went from one extreme to the other”.

He said that the government did not close the national borders but did “the most ridiculous thing” by halving the airport service fee to encourage people to travel to the country “even though airplanes weren’t flying.

“When everybody else is saying, ‘You know what? Stay home. Leh we get past this thing; leh we try and understand what’s happening’, St Vincent said, ‘No; come, come. We will reduce our airport tax or surcharge by 50%. So you could come to St. Vincent.’

“But then, this is the same government that went from that extreme to the one of firing teachers and public servants and police officers who did not or could not in their own conscience take the vaccine.”

Friday said that the opposition opposed this. “Because even though in principle, as a party, we did not reject vaccination, we opposed forcing it upon people in the way that the government did,” he said, adding that SVG was the only country in the region that fired people for failing to take the COVID-19 vaccine.

He said that even as the country is past the worst of the pandemic and is only paying “lip service” to the protocols in school, the government still still mandates vaccination for  teachers.

Friday said he knows of experienced teachers, including constituents, who are home because of the vaccine mandate.

He said the government would not admit that they were wrong in implementing the vaccine mandate “and causing so much hardship and pain which continue today.

“And they will not reverse course and reinstate all those who are fired or given an option and bring them back with the benefits.”

The opposition leader quoted the minister of finance praising the nation’s  healthcare workers in his Budget Speech.

“They stayed true to the oath yet how quickly the government turned on them from being indispensable heroes in the early stages of the pandemic, who were true to their oath — do no harm — became the problem suddenly when they themselves feared, justifiably, because we didn’t know much about the vaccine, either,” the opposition leader said.

“It’s the same people who are heroically teaching our children,” Friday said, adding that some of the dismissed teachers have since taken the jab and returned to work.

“Many took it as a choice between their body and their bread. But they will not forget, they can’t forget it, because it’s in their bodies… Many of them didn’t do it willingly,” he said, adding that every horror story about the vaccine, including those peddled by conspiracy theorists, “just really renews the fears within them and it makes them angry.”

He told Parliament that the country could have done without the vaccine mandate.

“Don’t talk to me about ‘draconian’. Nothing was more draconian and even though competent teachers of long service are still outside the teaching system and they want to go back. They fear for their financial future. So why not end the policy officially, publicly and invite them back to the jobs? Let them decide, knowing how poorly they were treated, how dispensable they suddenly became, let them decide if they wanted to do it or not,” Friday said.

He said that even now, the government is fighting the workers “tooth and nail” in court.

“The government, quite frankly, was wrong. We could have accommodated and managed as we did before the vaccine came — those heroic people who are adhering to their oath,” he said.

“So therefore, the minister, as one of the influential members of Cabinet, can advise and urge a change in course. And when he reflects on that passage that he wrote here about the awe-inspiring words of these people may even consider apologising to them,” the opposition leader told Parliament.

He said it is not about who wins or loses.

“It’s getting the teachers back to their classrooms, making people feel appreciated and valued and doing what is right,” the opposition leader said.