2022 UN Climate summit was ‘at best, a mirage in the desert’ — Gonsalves 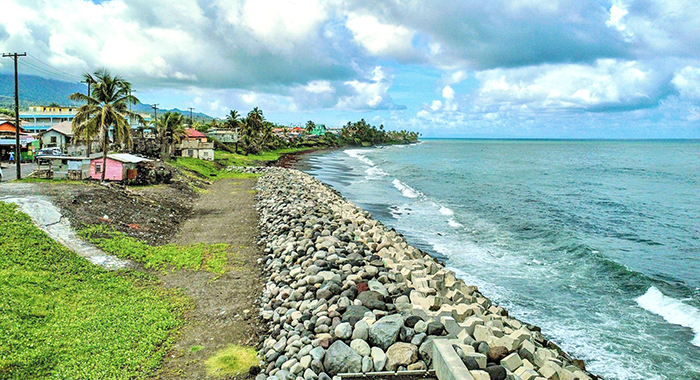 This year, EC$80.3 million of the EC$1.4 billion budget is allocated to environmental protection. The government continues to spend million on sea defence, such as this one concluded in Georgetown last September. (Photo: Lance Neverson/Facebook)

The 2022 United Nations Climate Change Conference (COP27) held in Egypt last November was “at best, a mirage in the desert,” says Minister of Finance Camillo Gonsalves.

He said in his Budget Address this week that the global climate talks confirmed that “the slow halting steps of possible diplomatic advances have not kept up with the headlong sprint of major polluters towards environmental calamity”.

This is the case even as the countries worst affected by climate change, such as St. Vincent and the Grenadines (SVG), continue to have to allocate a large chunk of their meagre resources to respond to climate change.

“The battle against climate change is a constant and increasingly lonely rearguard action against the selfish, short-sighted actions of major emitters who believe that it’s okay for small island developing states to pay the price of their rich countries’ voracious appetites for consumption and pollution,” Gonsalves told Parliament.

“It is capitalism run amok,” he said, adding that Kingstown “will continue to fight globally and here on the ground diplomatically, legally and infrastructurally to ensure our survival against the menace of climate change”.

The minister said that the 2023 fiscal package continues that battle. This year, EC$80.3 million of the EC$1.4 billion budget that the finance minister is asking lawmakers to approve has been allocated to environmental projection, a marginal increase over the 2021 figure.

He said that at COP 27, countries announced with great fanfare the creation of a loss and damage fund through which major polluters would help developing countries to recover from the damage and economic losses wreaked from ongoing climate change impacts.

“You had to read the fineprint to learn that although rich nations agreed to create a loss and damage fund, no one agreed to put any actual money in the fund,” Gonsalves said.

“It was reminiscent of rich countries’ still unfulfilled 53-year-old promise to spend 0.7% of their gross national income on official development assistance by the year 1975 or the 2009 commitment to mobilise $100 billion a year to address climate mitigation and adaptation needs of developing countries,  or indeed, the solemn 2016 pledge to ‘pursue efforts to limit the temperature increases to 1.5 degrees Celsius above pre-industrial levels, recognising that this would significantly reduce the risks and impacts of climate change’,” Gonsalves told Parliament.

He said that none of those “headline-grabbing global promises” were anywhere close to fulfilment.

“At this rate, the diplomatic operation will be deemed successful long after the environmental patient is already dead,” he said

“St. Vincent and the Grenadines cannot wait. Climate change threatens our very existence. As the waters and temperatures rise and as the hurricanes intensify and as the droughts become more frequent and the disasters become the rule rather than the exception, our situation becomes ever more precarious yet we must fight on.”

He said that in the face of long odds and with limited means, budget 2023 continues to invest in adaptation and environmental protection.

The finance minister said that while the fiscal package allocate EC$80.3 million this year under the functional classification of Environmental Protection, in reality though, millions more are allocated to this, especially in infrastructure investments, “where almost every single road, bridge or building is now designed and built or relocated to take account of the future impacts of climate damage”.

“Sandy Bay is threatened to its west by a fitfully slumbering volcano and to its east by rough and rising seas that are removing many feet of coastline annually — not not inches, feet of coastline,” Gonsalves told Parliament.

He said that recent hurricanes and storms have disproportionately passed over the northern third of St. Vincent.

“The coastal protection of Sandy Bay is a most urgent imperative. Without it, the village of Sandy Bay could cease to exist,” the finance minister said.

He said that in late 2018, the Caribbean Development Bank approved US$13.5 million to finance coastal protection projects in Sandy Bay.

“That will not be enough to guarantee adequate coastal protection of the entire village of Sandy Bay. But it’s a start.”

The project will backfill the area in front of the newly constructed revetments to act as a buffer zone between the existing infrastructure and the sea and will construct a 350-metre-long (1148 feet) reinforced concrete retaining wall measuring 2.5 to 4 meters (8 to 13 feet) in height.

Gonsalves said three lots on the Sandy Bay project were advertised in last Friday’s newspapers  and Budget 2023 provides just over EC$8 million to start the project this year.

“And we will be pushing hard to get this work done as quickly as is humanly possible,” Gonsalves said.

“The erosion at Shipping Bay threatens to undermine the Windward Highway and effectively cut off vehicular access to half of the windward side of St. Vincent. We cannot allow that to happen,” Gonsalves said.

He said Budget 2023 begins addressing the most vulnerable parts of the Shipping Bay coastline with an $800,000 investment in 64 metres (210 feet) of stone revetment to blunt the impact of the crashing waves.

“The entire $5.2 million project will proceed over the next two years after we have first secured the most vulnerable area of wave impact,” the finance minister said.