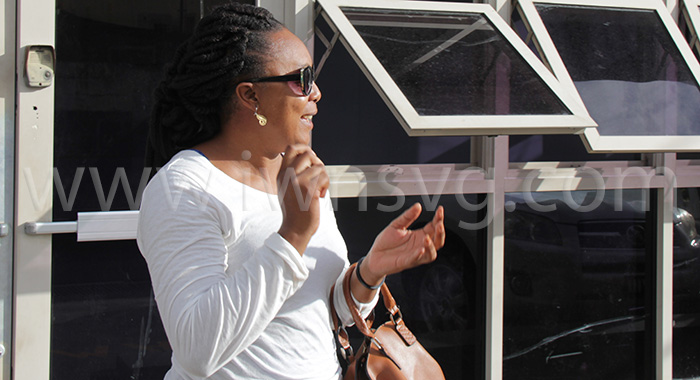 The defendant, Mitra-Ann Prescott outside the Kingstown Magistrate’s Court on Jan. 4, 2023.

The Royal St. Vincent and the Grenadines Police Force, in 2019, had no way of proving that items ordered were actually delivered, the tyre purchase scam trial has revealed.

Joanne Noel, a retired public servant who was an executive officer at the police department, made the disclosure as she testified at the Kingstown Magistrate’s Court on Jan 4.

She was testifying as a prosecution witness in the case in which Mitra-Ann Prescott, of Harmony Hall, is being tried for the alleged theft of EC$154,000 from the Government of St. Vincent and the Grenadines.

The prosecution is alleging that Prescott, a junior clerk attached to the Office of the Commissioner of Police (COP) stole the money through a tyre purchase scam.

The accused woman was also being tried on three corruption charges, which Prosecutor Rose-Ann Richardson withdrew on Jan. 6, when she closed her case.

In her evidence in chief, Noel told the court that she did administrative work, including secretarial services for the COP and was an approver on SmartStream, the government’s procurement and accounting system.

Noel was stationed at the COP’s Office and up to 2019 had been employed in the government service for 37 years and had been assigned to that office for at least 10.

“When the items are being placed in the [SmartStream] system and they are ready for payment, I normally have to go and prove the invoices on the system and also to sign off on the invoices,” she told the court.

She said the clerk who had entered the information would say they have invoices to approve.

“We normally have a control group. They will give you all the invoices in that group and then you go on to the system and you approve the invoices, making sure what is on the system is also on the invoice,” Noel told the court.

She said Prescott’s duties were to make orders and to input into SmartStream the information on the invoices.

Noel said that using SmartStream was part of Prescott’s job and she approved invoices that Prescott put into the system.

Noel said that during her stint at the COP’s Office she had to approve invoices for tyres.

Noel worked at the office until June 2019, when she proceeded on pre-retirement leave. Her retirement took effect in November 2019.

As she responded to the prosecutor’s questions, Noel said that the COP’s office purchased tyres for police vehicles from “SVG Tyres and Sales,” adding “we did for Sayers and I think we had –” before finally settling on, “I can’t recall.”

She said that when her office paid for items, there was no system in place to say if the department received them.

Noel told the court that if tyres were requested from a vendor, she would not know if those tyres were received.

“My knowledge of SmartStream was as an approver,” she told the court, adding that she did not know about entering information in the system.

She said she could not give a definite response as to how long Prescott had been using SmartStream.

During cross examination by defence counsel Israel Bruce, Noel told the court that an enterer enters information into the system after receiving a request from a police station or unit.

The station or unit sends a written request and that is the information that clerks, like Prescott, enter into SmartStream.

In the police department, there was no way, no mechanism to check requests that were coming from these outstations, Noel said.

If a request was sent in, most likely it had been signed off by a superior office at the police station.

When the information arrived at police headquarters, the junior clerks would simply enter it into  SmartStream to prepare the purchase order.

She said that the clerks who entered the information would not have been able to tell whether the information they received to produce the purchase order was valid or not.

At the end of her testimony, Senior Magistrate Rickie Burnett, who is presiding, asked Noel “for my own information” what was the level of the chief clerk. She responded, saying an inspector of police.

Responding to further questions from Bruce during cross examination, Noel said that an approver would not check the information in the system against the request sent by the police station or unit.

She said that when approving the order, the approver would have the document that the chief clerk signed off on.

Once the approver approves, the order, “it is not on the enterer”. The purchase order, which was approved by the executive person at the COP’s Office, is then sent to the vendor.

Noel told the court that SmartStream would not allow someone to print an order that is not approved by an executive officer.

She said the only way of knowing that the vendor delivered the items was when the COP’s Office got back the invoice.

“When you get back the invoice, you are making an assumption that the items were delivered,” she said.

She said that in such a situation, “it could be” possible for a vendor to send an invoice even if the vendor had not delivered the tyres.

If such a situation occurred, it would not be the fault of the junior clerks, Noel told the court.

She said that if a police station makes a request for four tyres, and then makes a similar request two weeks later, the junior clerk could question it but was not authorised to question the senior officer about why they are requesting tyres again.

Noel told the court that she has never done any training on how to differentiate handwriting.

“So, you were making a guess when you said that handwriting is Mitra-Ann Prescott’s because you are not an expert? What you are saying is that you believe it to be hers?” Bruce said in relation to handwriting that Noel had identified on documents that the prosecutor had shown to her.

She agreed with the defence counsel that there are people who write alike.

She said she could not be sure that the handwriting was Prescott’s.

Noel told the court that during your stint as executive officer at Police Headquarters, there were temporary workers there.

She said these temps were permitted to enter information on SmartStream but did not have their own passwords.

The witness said that if a temp went on to Prescott’s account and prepared a purchase order, the outcome of the control group would reflect that Prescott had prepared it.

Temps were allowed to access SmartStream with the accounts clerk’s permission, Noel said.

Noel told the court that during her time as executive officer, she was not aware of any policy that said that someone who entered information into SmartStream was not authorised to assist a vendor in collecting payment on that vendor’s behalf.

“I believe if there was such a policy, I would have been aware of it,” Noel told the court.

She said that before an order went to the Treasury Department for the processing of payment, it had to be approved again by the assistant secretary.

A junior clerk could not approve the payment at the Treasury.

Noel said she could not tell the court that Prescott had done anything wrong in the transaction from the order being sent from the police station or unit to the payment being delivered by the Treasury.