Gov’t passes $1.2b budget after debate like ‘arguing against jello’ 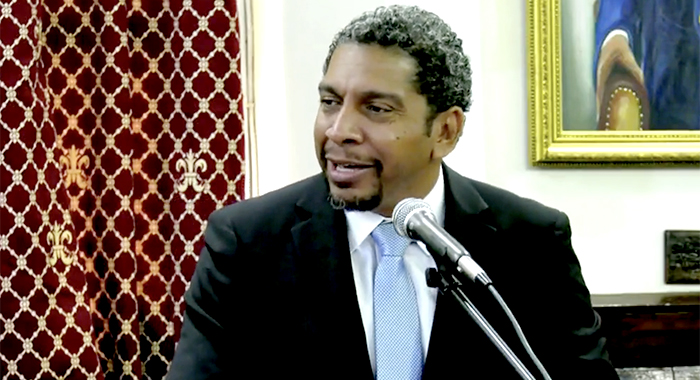 Government lawmakers, on Thursday, approved Minister of Finance Camillo Gonsalves’ EC$1.4 billion budget for 2023 during a closing session boycotted by the opposition.

The opposition did not give a reason for their absence, after attending the first three days of the debate during which all of its members spoke on the fiscal package.

However, some political observers speculated that their boycott might have been in response to Prime Minister Ralph Gonsalves’ absence during Opposition Leader Godwin Friday’s four-hour response to the fiscal package.

Gonsalves used all of his allotted four hours on Thursday before the finance minister concluded the debate in about  90 minutes, one half of his allowed time.

In his wrap up, the minister said the debate was like “arguing against jello” as he accused the opposition of having no fixed position on the policy issues covered by the budget.

“I had originally intended to also thank the members of the opposition because the debate was relatively free of rancour,” the finance minister said.

“Even though there were disagreements, there was reasonable good humour and so on while we were carrying on but I see that they couldn’t maintain for an entire four days. And their true colours are once again on display,” Gonsalves said.

He said that when the opposition boycotted previous sessions of the national assembly, it always gave a reason. “But today, they’re just not here. And I’m not exactly sure why…”

Gonsalves  expressed gratitude to the prime minister for his “magisterial” presentation, in which he addressed “the majority of the issues that arose during the course of the debate and therefore it’s much less need for me to rehash, retrod that ground”.

The finance minister said one of the difficulties that he has had is defining the current opposition’s philosophy.

“Under the days of [former Prime Minister] Sir James [Mitchell] of blessed memory, there was a definable core set of principles. You didn’t have to agree with them — not talking about whether you agree with them or not,” Gonsalves said.

“He was a man who was in favour of deregulation. He was a man who believed in trickle-down economics. And that’s not a knock; that was the Reagan era sort of philosophy.”

The finance minister said the former prime minister also believed in integration, and would defend those things.

He said the government could predict Eustace’s responses “based on his beliefs and his idea about what the government should be and its role in the country.

“I can’t pin down what the Honourable Leader of the Opposition stands for,” Gonsalves said of the current opposition leader.

“I can’t pin down what his idea is, what his animating philosophy is… There is a kind of duality — you talk out of both sides of your mouth, you stick your finger up to see which way the wind is blowing. And you go there. And if the wind blows the other way, you go back the other way.

“And because of it, it’s difficult to have these debates, because you listen to the opposition, and everybody’s getting up saying something different,” Gonsalves said.

He said some opposition lawmakers were saying, “‘The debt too high, we’re spending too much money, but we need more things done. We need more revenue but you should cut the VAT.

“‘Having a salary increase is irrational at this point in time, said the Honourable Member for Central Kingstown, but the salary increase is not high enough, says somebody else? … I’m just framing it in that way to say you’re arguing against jello. I mean, nobody has a position; everybody shifting and wobbling.”

Gonsalves said his is “a people-centred government. It is going to fight to lift the condition of people in this country.

“It is going to lift poverty, it is in favour of education, and it is going to invest in infrastructure that will help develop this country. It is a social democratic movement. And it is deeply rooted in the people and their aspirations. That’s what we are. What they are? Depends on when you ask them; depends on who posts what on Facebook; depends on who calls in to NICE Radio.”

One reply on “Gov’t passes $1.2b budget after debate like ‘arguing against jello’”