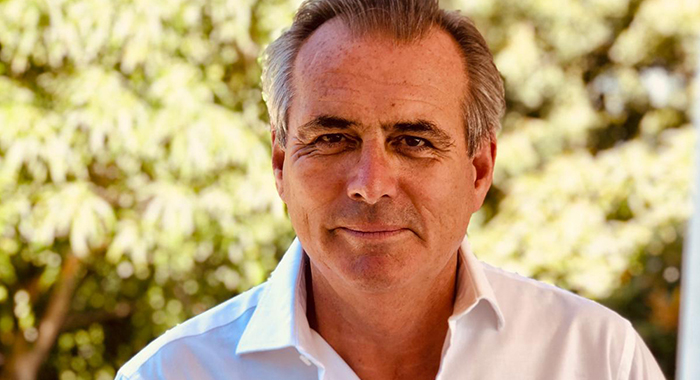 Chairman of JAD, James Archibald in an undated photo published on the company’s website.

The Mustique-based construction company that last week announced its liquidation, putting 100 workers on the breadline, has apologised for saying “the political and economic climate in St. Vincent and the Grenadines” contributed to its decision.

In a Jan. 3 letter to its staff, British national James Archibald, who is chairman and founder of JAD (Mustique) Ltd. said “a combination of the political and economic climate” SVG, COVID-19 and rising costs, have all combined over the last few years to put the company in “a fragile financial position”.

However, last Sunday, Prime Minister Ralph Gonsalves rejected the comments and disclosed that Archibald’s application for citizenship and application for work permit for new staff had been denied because of tax issues.

The prime minister said that JAD, at one point, owed “close to $4 million on various ranges of taxes”.

On Thursday, the company issued a statement walking back the comments about the political and economic situation in SVG.

“In an announcement dated January 3rd, 2023 JAD (Mustique) Ltd. and its Directors made certain statements, which were made in haste, at a time when the company management was facing a very difficult situation,” Archibald said.

“We are truly grateful to the Mustique Company Ltd, the Government of St. Vincent and the Grenadines and all the skilled JAD employees for all the support of JAD (Mustique) Ltd. during our years of operations on Mustique,” he further stated.

In his comments on radio on Sunday, the prime minister said Archibald “can’t say that because of the political situation.

“The political situation is because you didn’t pay any taxes. We just had 5% economic growth for this year, and another 6% for the year coming. Last year, we had record property sales in Mustique. We collected last year because of the number of properties sold close to $100 million. You see in both alien land holding license fees, and transfer taxes for property and  stamp duties”.

He said that the “long and short of the story is that there has been a very checkered interaction between Mr. Archibald and his company and the Inland Revenue”.

Gonsalves said his own view was that  Inland Revenue had been “too lenient” with Archibald and he reflected this in a note to the cabinet secretary.

“But, of course, that’s a judgement for the tax authorities as to how they’re dealing with a particular taxpayer. It would be an awful thing where a minister of fFinance gets involved and directs the control of Inland Revenue to handover files to the DPP.”

The prime minister said that prosecuting people is not his mandate, adding, “there’s separation of powers”.