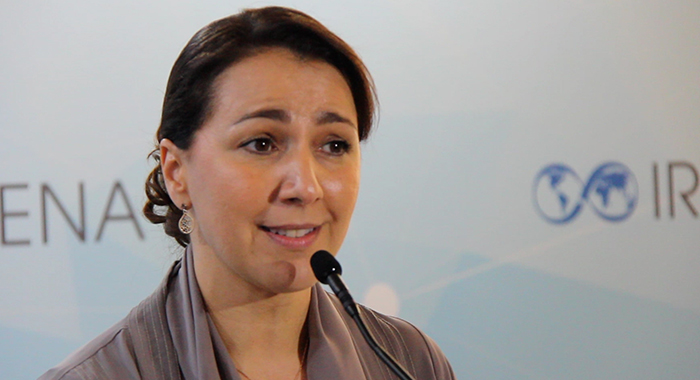 Abu Dhabi, UNITED ARAB EMIRATES (CMC) — The United Arab Emirates (UAE), which will host this year’s United Nations Climate Change Conference (COP28) in December, says it is pushing to limit global temperature to the level that Caribbean countries say is necessary to avert the worst effect of climate change.

The Caribbean and other small island developing states (SIDS) say that if global temperatures rise higher than 1.5 degrees, above pre-industrialisation level, it would worsen the already catastrophic impact of climate change.

“The COP28 UAE presidency is focused on delivering concrete, pragmatic solutions. We want to keep 1.5 degrees alive and this means we need to slash emissions by 43 per cent by 2030,” Mariam bint Mohammed Saeed Hareb Almheiri, UAE Minister of Climate Change and Environment, told reporters.

Her statement comes one day after her country was announced as host of the annual climate negotiations in December.

Almheiri was addressing the media during the 13th Assembly of the Abu Dhabi-based International Renewable Energy Agency (IRENA), a leading global intergovernmental agency for energy transformation.

“So, this approach of energy transition has to be ambitious and pragmatic,” she said, adding that it is important to the proceedings of the COP28.

The Intergovernmental Panel on Climate Change (IPCC), an intergovernmental body of the United Nations, says the use of fossil fuels for the production of energy is a major contributor to a warming climate.

“It is realistic to say that we need to meet the 2030 timeframe for emissions reductions established by the IPCC,” Almheiri told reporters, adding “loss and damage from climate change is impacting people and communities around the world. And it is no more a myth and it does not distinguish countries, communities or race.”

The UAE climate change and environment minister said her country is “saddened” by the way severe weather conditions around the world are occurring at an unprecedented rate as the global average temperatures rise.

“So the COP28 will really further prioritise the need of the world’s most vulnerable communities, including working with IRENA, to advance the loss and damage agenda.”

She said this year’s climate talk will aim to “transform and accelerate climate action to meet our common targets”.

2023 is also the year of the global stocktake of the Paris Agreement (GST).

GST is a process for taking stock of the implementation of the 2015 Paris climate agreement, with the aim to assess the world’s collective progress towards achieving the purpose of the agreement and its long-term goals

“The global stocktake, as you all know, will provide a robust overview. It’s basically like a report card. And we will know how effective the global efforts in combating climate change are in reducing the greenhouse gas emissions,” Almheiri said.

“Thus, we must utilise this milestone to ensure better, more efficient and more equitable access to climate finance to implement and enhance mitigation and adaptation measures,” she further stated, adding that governments, international financial institutions and private finance will all play a key role.

“I think it’s really important to understand that climate action is not a cost to bear but it’s an opportunity to seize. And so going forward, we hope to see a significant increase in issuance by all types of players — higher volumes of green investments will not only help us achieve our collective climate ambitions but will also contribute to consolidating the UAE status as a regional hub for sustainable finance.”

Almheiri said her country really believes that innovation is key in tackling climate change and has resulted in breakthrough solutions that can really rapidly accelerate what is needed.

Almheiri spoke with reporters following an opening ceremony in which Dr. Sultan Ahmed Al Jaber, UAE Minister of Industry and Advanced Technology, pledged his country’s full support in advancing IRENA’s mission and “this very critical year ahead, when we will host COP28.

Al Jaber, who was the UAE’s special envoy on climate change and is now managing director and group CEO of the Abu Dhabi National Oil Company (ADNOC Group), said COP28 will be a milestone moment, as the world conducts the first global stocktake to check progress against the goals of the Paris Agreement.

“But we don’t need to wait until the global stocktake to know just how much work there is ahead of us. As we seek to close the gap between ambition and reality, no sector offers as much potential as renewable energy and never has IRENA’s mission been more important than in the crucial years ahead of us,” he said.