PM, AG sworn in as first members of ‘nimble’ Cabinet in Antigua 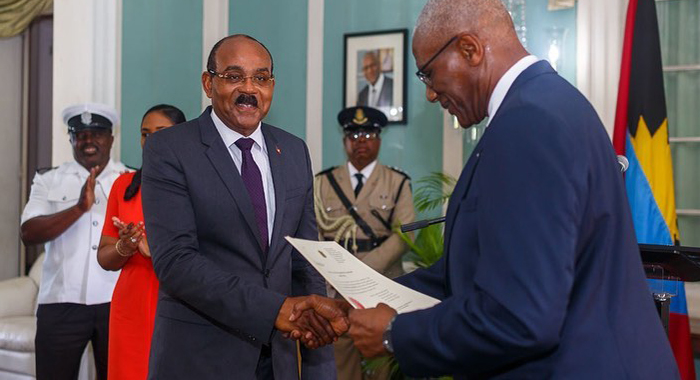 Gaston Browne, left, is sworn in, on Thursday, for a third consecutive term as Prime Minister of Antigua and Barbuda. (Photo: ABS Television/Radio/Facebook)

ST. JOHN’S, Antigua (CMC) — Gaston Browne was Thursday morning sworn in as prime minister for an unprecedented third consecutive term and with a reduced majority in Parliament, he said he would have a smaller, more nimble Cabinet this time around.

Browne, who is also minister of finance, corporate governance and public-private partnerships, took the oath of office at a brief ceremony at Government House, along with Attorney General Steadroy Benjamin, less than 24 hours after his Antigua and Barbuda Labour Party (ABLP) won nine of the 17 seats in Wednesday’s elections.

The other members of the Cabinet are expected to take their oaths today (Friday).

Speaking to state-owned ABS Television after being sworn in, Browne said he would have “a very small Cabinet”.

“I do not believe in bringing in a lot of senators to make ministers. So, you will have a smaller, more nimble Cabinet and I’m quite sure based on the expansive experience among members of the Cabinet that they will continue to deliver for the people of Antigua and Barbuda,” he said.

Reflecting on the fact that the ABLP was heading into Parliament with six fewer seats than it had following the 2018 general elections, Browne said the party was aware that securing a third term would be difficult and was compounded by “relentless opposition propaganda” as well as the residual challenges of the COVID-19 crisis which included “issues over which we had no control …

“There were some attendant issues associated with the crisis. There was an escalation in unemployment and we know that people were feeling the pressure, they had to deal with increase with prices, fuel prices, and we understand that they had concerns and they had to really place their anger somewhere and they came to us and we accept, we understand,” he said.

“But the good thing is they did not vote us out of government. So, we thank them for their mercy and we thank God as well for his guidance and his protection. And I believe that God is with us. And we’re just so grateful to be able to continue to preside over the governance of the country, especially from the standpoint that I think, at this time, we are really poised to take the country to the next level of progress and prosperity.

“I’m of the view that a governance change would have retarded progress and resulted in some level of retrogression,” he added.

Of the eight other seats up for grabs, the main opposition United Progressive Party (UPP) won six — five more than it did in the 2018 polls — while former government legislator Asot Michael who ran as an independent emerged victorious, and the Barbuda People’s Movement (BPM) retained the seat on the sister isle.

The prime minister said his new administration would be focused on continuing to build out the socio-economic infrastructure and one of the major projects this year would be expanding the University of the West Indies Five Islands Campus which will begin within a matter of months.

Additionally, he said his government will pursue an aggressive urban renewal programme, improving the housing stock to begin the process of ridding the country of dilapidated wooden houses.

As for his priorities in the new term, the attorney general said he would be “looking to prisons as my number one situation and I shall be getting the legal framework of Antigua and Barbuda in place”.

Benjamin admitted he was surprised at the ABLP’s slim margin of victory as he believed the government “had done enough to have gotten a very easy victory”.

However, he added that the people wanted to send a strong message which Prime Minister Browne would listen to.

Meanwhile, speaking immediately after the elections, Browne said the results will give the ABLP government the opportunity to re-align “and also create the opportunity for fresh talent.

“So we do not see this as a bad thing per se, we see it as an opportunity at the same time. However, I want to thank those of my colleagues who … have served this country well over the last eight and a half years and of course we will continue to stand by them, so we will not leave them out in the cold,” Browne told supporters.

Browne became the first government leader here to win three consecutive general elections. He polled 1, 295 votes as against 621 for Alister Thomas of the UPP and Jamel Knight of the Democratic National Alliance (DNA) to win the St. John’s City West seat.

“I want to thank you all very much … I say thank you sincerely from the bottom of my heart. I feel humbled, again, to be the first prime minister to get three consecutive terms and that is a significant amount of confidence and trust which I shall continue to honour,” Browne said.

Browne said he had signalled to his party that it needed fresh legs and new talent.

“Truth be told, after two terms some ministers become lethargic. They do not have the will to fight,” he said, adding that some of “our colleagues did not have the energy to mobilise, you could have seen it at our events, it is something the leadership discussed…

The DNA failed to make any impact in the election with its leader, Joanne Massiah polling only 22 votes.

Preliminary figures released by the Antigua and Barbuda Electoral Commission (ABEC) showed that Nicholas, who has defeated the former finance minister on all three occasions, polled 791 votes while Lovell received 785. Leon Smith of the DNA got 13 votes.

In the last general election, Lovell lost by 153 votes. He has since called for a recount.

“If you are going to lead a government, you have to win your seat,” said regional political scientist and pollster, Peter Wickham.

On the sister isle of Barbuda, the Barbuda People’s Movement (BPM), retained the seat with the incumbent, Trevor Walker, comfortably winning against Knacyntar Nedd of the ABLP, according to the preliminary results.

Among the casualties of the election were Works Minister Lennox Weston, Samantha Marshall, the minister of agriculture, fisheries and Barbuda affairs, Michael Browne, minister of the creative industries and innovation and Dean Jonas, the minister of social transformation, human resource development and the blue economy.

Jamaica-based pollster, Don Anderson, who had conducted several opinion polls prior to the general election, said while the UPP “will do much better than they did in 2018,” it failed to drive home the issues during the campaign.

“The shift we are seeing is a vital one,” Anderson said on a radio programme here, noting, however, that the shift was not sufficient to drive the UPP home “because they started too far behind”.

Opposition Leader Jamale Pringle, who was the sole UPP legislator in the last Parliament, easily won the All Saints East and St. Luke constituency, defeating Colin James by a margin of 1, 799 to 1,047.

Avory Knight of the DNA polled 52.

The highlight of the election was Michael’s victory. The former government legislator, who had been the parliamentary representative on four occasions, but was prevented from contesting the seat on behalf of the ruling party.

Michael had taken his matter to the courts in a bid to get the ABLP to reverse its decision and had even entertained the idea of becoming prime minister if none of the two major parties had failed to win sufficient seats to form the government.