C’bean politician to oversee most important climate talks since Paris 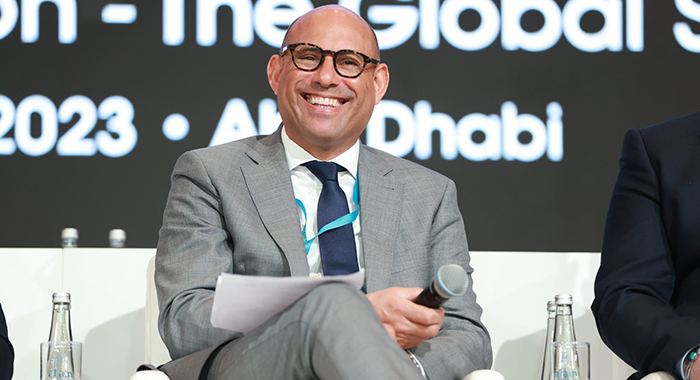 ABU DHABI, United Arab Emirates (CMC) — Simon Stiell, the Grenadian head of the United Nations’ climate change agency is preparing for the most important climate change change since the Paris Agreement of 2015, saying he wants this year’s negotiations (COP28) to be recorded as “a decisive moment in history”.

Slated to take place in Duba this year, COP28 will be the first global stock take (GST) since Paris.

Stiell, who is executive secretary of the United Nations Framework Convention on Climate Change (UNFCCC), told the Abu Dhabi Sustainability Week Summit that COP28 “is a moment of truth”.

Outlining his vision for the talks, he told the audience, which included world leaders and senior diplomats, that the GST “must tell us where we are, where we need to go and how we’ll get there.

“This is not just another … report. This is a moment in history,” said Stiell, who is a former environment, education, and human resources minister in St. George’s.

“I want the history books to read, ‘2023 was the year the world stopped dithering and a paradigm shift happened’,” he said.

The GST, he said, must be “a tool which gives us a roadmap, one which could guide us, sector by sector, region by region, actor by actor on, what surgical intervention must take place to align ourselves with a resilient 1.5 degree world”.

Caribbean countries and other small island developing states (SIDS) have that that climate change becomes an existential threat if global temperatures are allowed to rise higher than 1.5 decrees Celsius above pre-industrialisation levels.

At COP27 in Egypt last year, they convinced the world to include this in the agreement. And Stiell said the roadmap emerging from COP28 must speak to where further action is required in a practical and usable way.

“We’re far enough away from the COP that I can ask you to attempt the new challenge this year. Before you put on your negotiating hands, whether that be for a government, company, or institution, spend some time being philosophical,” he said.

He asked the parties to consider what the world really need and how it can be presented in a practical and usable form.

“The GST won’t deliver simply because it’s a date on the calendar, a technical obligation, but because we choose to rise to the challenge of the great opportunity for accelerated action.”

He challenged parties “to envisage the most ambitious political outcomes we need to see for the global stock take.

“How can we use the global stock take after global reset to course correction? I don’t want to hear what’s the bare minimum we need to do. This is a unique opportunity.”

“Achieving a global goal on adaptation, hammering out the details of the Loss and Damage Finance Facility, driving towards a global goal on finance, accelerating both energy and adjust transition, closing the massive emissions gap and work in many other areas. This will be no small feat.”

He restated his comments at the end of COP27 that the UNFCCC Secretariat, as custodians of negotiations process, will be looking into how it can do things differently.

“Where we can and where I have promised, the UNFCCC Secretariat will be leaning in to support the parties providing technical expertise and generating suggestions for discussion.”

Stiell acknowledged that COPs are just one milestone on the negotiations calendar, adding that all actions between COPs must be strategically aligned to lay the groundwork for what is needed this year.

He noted that 2030 necessitates the slashing of emissions across the board, transforming all sectors towards renewable and low-emissions future and repurposing a global financial system that supports this transition.

“Speaking directly to non-state actors and civil society, we need to engage now more than ever. We want a process fit for purpose that enables action and hold all actors to account. The accountability of commitments will be a significant pillar of this, one which I will be setting the bar on.”

But Stiell said commitments are meaningless without a plan to deliver them.

“Further to that, a plan without action is a waste of paper,” he said, adding, “We need your engagement to drive for momentum from commitment to plan to action.

the UN climate chief outlined his vision for this year’s COP days after the UAE announced the head of the state oil giant Abu Dhabi National Oil Company (ADNOC), one of the world’s largest oil companies, as president of COP28.

The appointment of Dr. Sultan Ahmed al-Jaber to preside over the talks has caused mix reaction, with some countries endorsing it while some environmentalists said it “goes beyond putting the fox in charge of the henhouse”.

In his first speech since the announcement of his COP28 presidency, al-Jaber told the opening if the International Renewable Energy Agency (IRENA) 13th Assembly on Saturday that his country has seen the benefits of adopting renewable energy firsthand.

“Eighteen years ago, we launched a plan to explore its potential, and the benefits soon became clear and very evident. We have built the world’s largest and lowest-cost solar plants that are fundamental to our net zero development pathway. We have also invested US$50 billion renewable energy on six continents around the world,” al-Jaber  said.

“Through these investments, we have seen that you can be pro-climate and pro-growth,” he said.

And, as the as Abu Dhabi Sustainability Week Summit opened on Monday, Razan al-Mubarak, UN Climate Change High-Level Champion, COP28, addressed “the elephant in the room” that is her appointment to the role.

“For me, coming from the United Arab Emirates, there is a slogan that now has been very much part and parcel of our development path. And the slogan is a saying from His Highness, the president, ‘When we load up the last barrel of oil, we shall celebrate.’

“And it’s in this context that we recognise that fossil fuels as a technology is a technology that is ripe for disruption and right for replacement — evolution,”  said al-Mubarak, who is also managing director of the Environment Agency Abu Dhabi, and the Mohamed bin Zayed Species Conservation Fund as well as the  president of the International Union for Conservation of Nature.

“Climate change brings that narrative to light, brings it with a sense of great urgency. So essentially, it’s always been there. But now climate change added the needed and required sense of urgency,” she told a panel.

She said her greatest challenge from a career perspective was to bring nature as a significant player within the climate change discourse.

“And this is my great opportunity to do that as the high level champion,” she said, adding that while nature is affected by climate change, nature “is also our greatest ally.

“… we will not achieve the 1.5 degrees Celsius target if we do not protect nature. Nature can provide up to 30% of carbon dioxide mitigations by 2030,” the UN climate champion said.

Meanwhile, Laurent Fabius, who was president of COP21, where the historic Paris accord was reached, said that COPs are important, adding that recently, “each COP has brought a contribution, sometimes not enough”.

Fabius, who is now President of France’s Constitutional Council, told Monday’s event that the COPs, “whether we like it or not, are the only global meetings that bring all government to the table to take decisions on climate issues”.

He said that when Brazil’s President Lula da Silva announced his country’s new position on the environment, he also announced that he want to host COP30.

COP28 comes at a time when Director-General of IRENA, Francesco La Camera said that the energy crisis resulting from Russia’s war in Ukraine is the world’s “last lesson” to become more energy independent by moving to renewable energy”.

Frans Timmermans, executive vice-president of the European Union Commission, told the IREAN Assembly that the war was “an attempt to impose autocracy on a continent that has enjoyed freedom and democracy for best time of the years since 1989”.

He said it was against this backdrop that the European Union has to “continue to play our part in being successful in this energy transition in fighting climate crisis”.

Timmermans said Europe has surpassed its goal of reducing emissions by 55% by 2030 and has sped up the introduction of renewable, the goal being 45% by 2030.

“We’re also diversifying our energy supply because Putin turned energy into a political weapon, and we cannot allow that to happen,” he said.

“So since we are fighting for our sovereignty, for our liberties, for our values, our energy sovereignty cannot be found in more fossil fuels because we don’t have them,” he said.

“But our energy sovereignty can be found in renewables, because we can create our own energy resources.”

However, Sameh Shoukry, Egypt’s minister of foreign affairs, and president of COP27 has warned that the climate talks should be isolated from geopolitical tensions.

“… these tensions will come and will be resolved. But the climate crisis will not if we don’t rise to the objective,” he said.

“We also have to isolate it from the sometimes the impression that it is being utilised for purposes other than meeting the climate crisis — for economic purposes for competitiveness. And that isn’t what we should be doing and that detracts from the process, puts burdens on it and that deviates from the necessary cohesive action …” Shoukry further stated.

Stiell agreed, saying, “The process that we have to work with is an imperfect one, but it’s what you have,”

He noted that Laurent had reflected on the progress made on the road to addressing the climate crisis.

“… progress has been made,” Stiell said. “What we’re doing, it is difficult, and we have work to do. What COP28 offers us is that opportunity to stock check but to course correct. And I think that this is as critical a moment as Paris was,” he said.