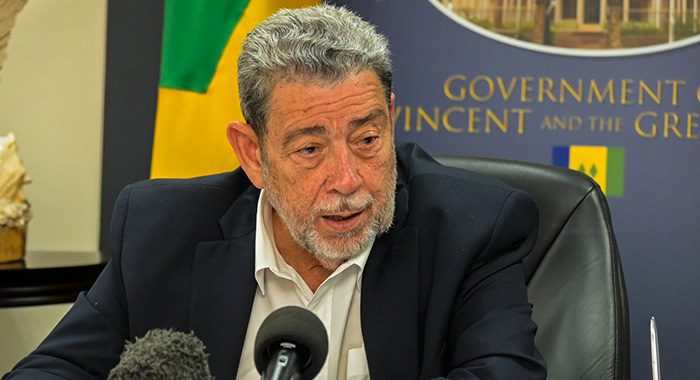 Prime Minister Ralph Gonsalves speaking during an event in Kingstown on Friday, Jan. 20, 2023.

St. Vincent and the Grenadines will, on Tuesday, make a bid to become president of the Community of Latin American and Caribbean States (CELAC), which is holding its seventh summit in Buenos Aires, Argentina.

Kingstown is hoping to lead the 33-member hemispheric organisation at a time when its political make-up is evolving.

For instance, Brazil’s President Luiz Inácio Lula da Silva is heading a delegation to Buenos Aires to re-join CELAC after a two-year absence.

Brasilia withdrew from the bloc during the presidency of Jair Bolsonaro, who was recently voted out of office, after serving from 2019 to 2022.

CELAC was founded in 2011 to avert U.S. influence in the hemisphere and excludes Canada and the United States. However, Washington will be represented at this year’s meeting, with U.S. Special Presidential Advisor for the Americas Chris Dodd in attendance.

At least one commentator has said that Brazil’s return to the group could be Kingstown’s biggest challenge to becoming the second Caribbean nation, after Cuba, to hold the CELAC presidency.

This month, Kingstown expressed fluctuating levels of confidence about its chances.

On Jan. 4, while Gonsalves was overseas visiting Guyana after a trip to Brazil to rally support for the bid, acting Prime Minister Montgomery Daniel said, on radio, that SVG “will be elected to the chair and the presidency of CELAC”.

However, speaking four days later on his return to Kingstown, Gonsalves said he did not know if Kingstown would succeed but said it would be “very impressive” if the country does so.

Daniel likened the CELAC presidency to SVG’s election, in July 2019, to a two-year term as a non-permanent member of the United Nations Security Council.

“There will be another great moment for St. Vincent and Grenadines,” Daniel said.

Meanwhile, Gonsalves speaking just four days later, on his return to Kingstown, said some people were questioning his travels and ambition for SVG to hold the CELAC presidency.

“You think I could stay home and the world come to St. Vincent and the Grenadines? I have to go to the world you know,” the prime minister said.

“The United States of America has the reserve currency, the US dollar, in the world. Even China is trying to challenge that currency but China has to go to the US still. Fellas lining up to go see Joe Biden. You think that they’re lining up to come and see Kingstown, or Roseau in Dominica, or Barbados or Port-of-Spain, in Trinidad, or Georgetown, Guyana?”

Gonsalves said the CELAC presidency would put Kingstown “in a critical leadership position to help to define the dialogue which will take place between CELAC, consisting of 600 million people in 33 states, define the relationship between CELAC and the European Union over the next two to three years”.

He said that this year, CELAC will hold summits with the European Union, the African Union, India and China.

The prime minister said that even though SVG has diplomatic ties with Taiwan and not China, Beijing is a member of the Caribbean Development Bank and the World Bank, in which Kingstown participates.

“And why is it that people always look at the price of everything and don’t consider the value?” Gonsalves said of his critics.

“I am telling you this, though we didn’t go to the Security Council for … any transactional arrangement to see what St. Vincent will get, the fact of the matter is this, we have benefited significantly from being on the Security Council, and I see investments coming because of the increased profile and I see also soft loans which have come because of that improved profile.”

Gonsalves said that three CELAC members — Brazil, Mexico and Argentina are in the G20  — the 20 largest economies in the world.

“Mexico is the number 11 or 12 economy in the world; Brazil is number seven or eight because under Lula first, number five or six,” Gonsalves said.

“I had to go and see Lula when Lula was inaugurated. They say what I went there for,” he said, adding that da Silva greeted him warmly at the inauguration.

He noted that no CARICOM country has ever held the presidency of CELAC.

“And Latin America-Caribbean unity is vital. And part of that vitality is to have a country from CARICOM hold the totem pole with the presidency,” Gonsalves said.

“I don’t know whether we’re going to be elected on the 24th of January, in Buenos Aires, Argentina. We have a reasonable chance. But if we do it, if we manage it, it will be a very impressive feat.”