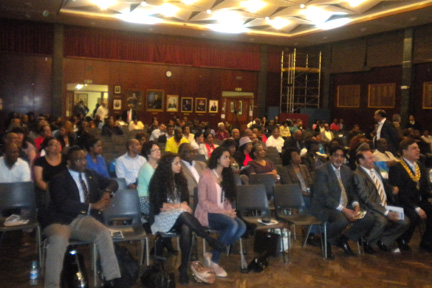 Section of the audience attending the Town Hall meeting organised by the SVG High Commission to the United Kingdom.

HIGH WYCOMBE, England — Prime Minister of St. Vincent and the Grenadines (SVG), Dr. Ralph Gonsalves, on Saturday addressed Vincentians, friends of SVG and other interested parties on developments in the country, at The Royal Grammar School in High Wycombe.

Following the Commonwealth high-level conference on governance for small island states in London, the Gonsalves-led delegation visited the SV2G School of Pan Music in High Wycombe before the Town Hall meeting organised by the SVG High Commission.

Dr. Gonsalves updated the packed auditorium about all sectors of the economy in SVG, providing a background and context from the overall impact from the world economic crisis and what the government is doing proactively to create a better future for all Vincentians.

Argyle International Airport is expected to be completed and fully operational early 2014 with airlines to be announced in the coming months, he said.

Musical and cultural renditions were provided by Kemuel Spence and Frank Robertson followed by a question and answer session with the Prime Minister.

Staff of the SVG High Commission presented gifts of thanks to the various dignitaries and VIPs that attended the event.